Speculation the US and China will strike a deal on trade around November has given markets some reason for optimism.

On the heels of Thursday’s FX about-turn on the news that trade talks between the US and China would resume in Washington later this month (reportedly now from this Wednesday), the WSJ on Friday afternoon NY time reported that the U.S. and China were drawing up plans to settle their trade dispute in November, when Presidents Xie and Trump are next due to meet.

This has given markets some reason for optimism that a de-escalation of Sino-US trade tensions is possible one side or other of November’s US mid-term elections. The news resonated more in currency markets than elsewhere with gains most pronounced for the NZD and AUD; but it also served to lift US stocks into positive territory for the day after flat-lining earlier in the session.

In EM, ADXY rallied by more than the Global EMCI, with TRY back above 6.0 (-3.1%) following fresh ratings downgrades from both S&P and Moody’s and a Turkish court ruled against the release of American Pastor Andrew Bunson. RUB was also weaker (-0.4%):

Thursday’s and Friday’s moves have pushed the USD into negative territory for the week, DXY and the somewhat broader BBDXY both about ¼% lower, and the ADXY into the black.  NZD, the biggest underperforming G10 currency of late, fared best on the week (+0.7%) with AUD only up 0.15%:

US equities were travelling fairly flat ahead of the WSJ report but lifted in mid/late afternoon trade to close higher, the S&P by 0.3% and the Dow by 0.4%. The news came too late to help European stocks, which finished lower.  On the week the Dow and S&P ended in positive territory while the NASDAQ was slightly lower given the drag from some big hits to specific tech.sector/e-commerce stocks earlier in the week. Shanghai is still 4.5% lower and by far the worse perfuming major stock market. This should though now start reversing on Monday on optimism towards reduced trade tensions, and news at the weekend that the Chinese bank regulator had ordered banks to step up lending to the infrastructure and export sectors.

Despite the positive trade story and boost it gave to risk assets, Treasury yields were flat to marginally lower on Friday.  On the week UST yields are also little changed as are core European yields, though implied yields on the Aussie 10s were down 4.0 bps on the week as of Friday’s offshore close.

Mixed performances across the commodity complex on Friday with the LMEX index slightly lower led by aluminium, but notable perhaps that copper, oil and iron ore all rose, some support seemingly drawn from the aforementioned WSJ story. Gain here couldn’t though rescue commodities from a down week with the sole exception of coal (steaming coal +1.2%, coking +0.1%).

Earlier Friday, RBA Governor Lowe delivered his half yearly testimony before a parliamentary committee.  There was nothing new in so far the Governor continued to suggest that the next move in rates was likely to be up, albeit not for a while, with only some form of China economic crisis (i.e. hard landing) seen capable of prompting the RBA to cut rates.  What was of note though was the Lowe firmly rebuffed suggestions that the RBA should consider lowering its inflation target (a debate that flared up last week with two local commentators suggesting it should be 2% as per many other central banks).  2-3% was just fine for Australian, Lowe opined. Also of note was that he suggested the fall in the currency to date ‘hadn’t been that much’ and that further ‘moderate’ depreciation would be helpful.

Aside from Canada CPI, the other main economic news Friday was the University of Michigan’s preliminary Consumer Sentiment reading, which unexpectedly fell to 95.3 from 97.9 (98.0 expected.  Current conditions (-6.6pts to 87.3) led the drop with expectations unchanged at 87.3

There is quite a bit of RBA activity in the week ahead, with the RBA Minutes released on Tuesday and a few speeches, including: Governor Lowe on Tuesday and Deputy Governor Debelle on Wednesday. Markets will be watching for additional comfort that recent wages and labour data is adding to the RBA’s view toward a tighter labour market, even slightly. Ahead of Q2 GDP, Construction Work Done is published on Wednesday, a lead indicator for dwelling and non-residential investment and the tone of public investment. Markets and NAB are looking for +0.8% q/q.

Internationally, the trade talks between the US and China, now due to get under way on Wednesday, will be keenly observed.  And then at the end of the week the Kansas City Fed holds its annual Jackson Hole Economic Policy Symposium (24-25 Aug) where the great and the good of the central banking world get together. This year’s conference title is ‘Changing Market Structure and Implications for Monetary Policy’.  FOMC minutes from the August 1st meeting are due in the early hours of Thursday Australian time. Eurozone ‘flash’ PMIs on Thursday’s are arguably the main economic event this week. 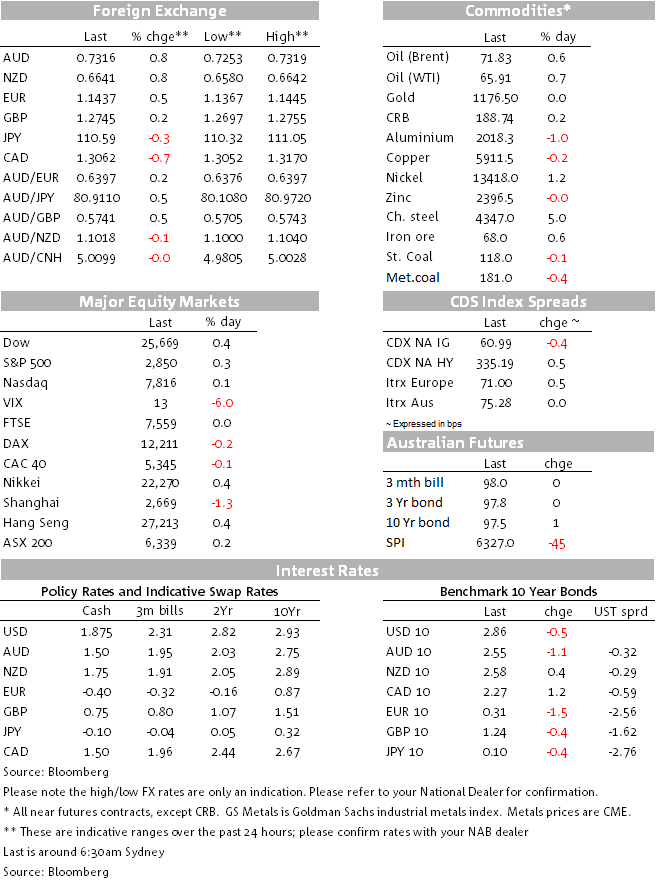