The US dollar is a little weaker this morning as the deadline for US tariffs on Chinese goods looms.

News that US trade negotiators have asked for a stable yuan policy as part of the China trade talks and a tentative agreement by China has triggered a broad USD sell off with AUD and NZD benefitting from the move. US equities are a bit higher on Walmart’s earnings, but European equities close lower on car tariff concerns and banks. GBP is the G10 outperformer amid Brexit speculation while UST yields are tad lower notwithstanding solid housing data.

The USD is weaker across the board with the overnight selloff initially triggered by a GBP rally following comments from a  government minister (Harrington) saying if May can’t get a deal then Parliament will take control and he  doesn’t see a no deal Brexit. PM May  meeting on Wednesday with European Commission President Jean-Claude Juncker in Brussels has been described as a significant meeting by UK officials with many expecting/hoping for legally binding changes to the so-called Irish border backstop. Although EU officials have downplayed the prospect of a breakthrough, GBP is the G10 outperformer over the past 24 hours, up  1.14% and currently trading at 1.3065. Yesterday’s news of Labour defections are also supporting the pound with the defections seen as lowering the chances of a possible Corbyn government in the event of new elections. UK data releases overnight showed UK wage inflation growing at the fastest in a decade and strong employment leaving the unemployment rate at 4%, levels not seen since the 1970s.

Early this morning the USD came under additional downward pressure following news that US negotiators are asking China to keep the value of the yuan stable as part of trade negotiations. The Bloomberg report also notes that both sides have tentatively agreed a stable yuan will be part of the framework of any final deal to be approved by both Presidents.  Although the AUD and NZD were already benefitting from the broad USD weakness sparked by the GBP rally, just before midnight, the stable yuan news gave both antipodean currencies another leg up with both pairs more than erasing the losses recorded during our day session yesterday. AUD now trades at 0.7170 (+0.52%) and NZD is at 0.6882 (+0.48%). Australian wages data is the domestic data highlight today and our economists expect a decent outcome of 0.6% rise for the quarter, taking the  yoy reading to 2.4% vs an unchanged outcome of 2.3% expected by the market.

After initially trading down to an overnight low of 1.1276, the EUR has also benefitted from the GBP rally and USD sell off. The pair now trades at 1.1348, in spite of mostly negative closes for major European equity indices. Europe’s Stoxx 600 decline 0.2% overnight with the market wary over the potential of US tariff on EU cars while the prospect of a delay in ECB interest rate increases has weighed on the banking sector with the sub index falling 0.9%.

JPY and SEK have also had a volatile 24 hours. Sweden’s SEK is the weakest (-0.41%) with CPI data much lower than expected – core inflation at 2.0% y/y against 2.3% expected and 2.2% previously. That said, after trading up to 9.4180, the SEK has staged a decent recovery down to 9.3034 amid the softer dollar theme mentioned above and commentary by Sweden Riksbank Governor Ingves saying that he still favours rate increases and isn’t concerned about a weak inflation report. Meanwhile USD/JPY is little changed at ¥110.64,after an up and down move following dovish comments from BoJ Governor Kuroda. Speaking before the Diet, the Governor said the Bank would consider extra monetary easing if a stronger yen affected inflation and the economy.  Options included lowering bond yields and increasing asset purchases.  We see this as a bit of an empty threat, with Japan’s 10-year rate already below 0.1% and little to show for its massive balance sheet expansion and market reaction seems consistent with our view.

Walmart reported its best holiday sales quarter in at least a decade, assuaging fears that US retail spending had fallen into a hole, suggested by official retail sales data.  The recent data showing a surprising plunge in December retail sales was brushed off by most at the time as unbelievable and likely reflecting seasonal adjustment and trading day issues.  Walmart’s strong sales support that view. In other data, sentiment among US homebuilders rose in February for a second month, exceeding all forecasts, supported by lower mortgage rates. The S&P 500 looks set to close in positive territory (+0.30% with Walmart share leading the gains within Consumer staples, +3.71%)

US Treasury rates have drifted lower, despite the positive Walmart and housing market news.  The 10-year rate sits 2bps lower at 2.64%.  The Fed’s Mester said that she would be comfortable slowing or stopping the Fed’s balance sheet reduction programme by the end of 2019, supporting the view of the Fed’s Brainard and Daly.

News of a trucker strike in Lima Peru has boosted copper prices given the prospect of delay in copper shipments as well as food and fuel supplies delays for Peru. Peru is the world’s second largest copper producer, as well as a major supplier of zinc, silver, gold and lead. Copper is up 2.62%, gold is 1.59% and oil prices are little changed. 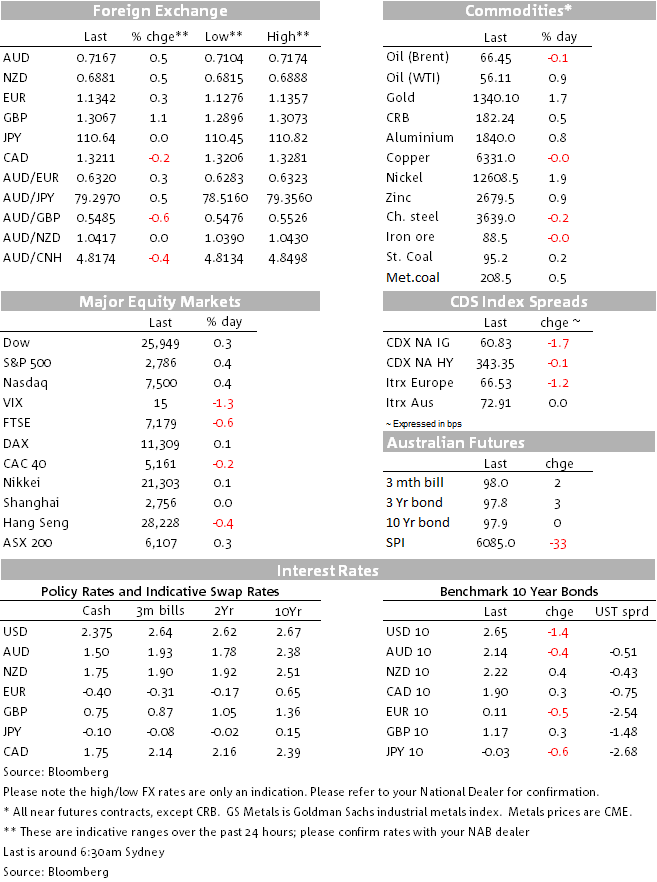 Markets Today: The battle to be king of the doves

Despite the increasing dovishness of central bankers the markets have been selling government bonds like they are going out of fashion.