The pound soared higher today whilst the Aussie dollar suffered.

Overview: Make me smile (Come up and see me)

Sterling jumped the best part of a big figure and a half overnight on the Barnier headline, from around 1.285 to over 1.30 this morning, AUD/GBP down from 0.566 to 0.561 on the move, the Aussie having faded yesterday afternoon after Westpac announced a rise in its mortgage rate of 14bps.  The bounce in Sterling came after overnight comments from EU Chief Brexit negotiator Michel Barnier that “we are prepared to offer a partnership with Britain such as has never been with any other third country”. Conciliatory headlines for sure, an olive branch, hopes of some give and take.

Without wanting to be too gloomy, the extent of the jump in the GBP/USD likely reflected a response to already evident short positioning.  As my colleague Gavin Friend has reported overnight, this news should not imply something significant is actually on offer or something even remotely close to what May proposed in her July 6 Chequers proposal.  Note also that November is now seen to be the month for an agreement between the UK and the EU (previously October when the European Council is scheduled.  The clock is ticking to 29 March 2019; only 211 days to go.

Barnier also went on to day that “the single market means the single market; this is not negotiable”.  Hosing down hopes or expectations that the EU was about to break its own red lines, the German Foreign Ministry in a Twitter post said that there would be no special rules for a post-Brexit UK, EU cohesion is a top priority, and that the EU won’t diminish the single market.  Likewise, French Economy and Finance Minister Le Maire said that the UK can’t be outside and in the EU at the same time.

As something of a counter, German Finance Minister Olaf Scholz said in a speech in Paris that he hopes “we can proceed fast” in negotiating a “manageable Brexit.”  “We must find a way to maintain a close, trusting and balanced relationship with the U.K. in the future. Everyone should be aware that “no deal” is no solution”.  Economies, societies have grown too close together.

For now at least, Sterling’s bounce on the give and take Barnier headline has been sustained, the AUD/GBP sitting back at just above 0.56.  At the minimum, the Europeans appear to be cutting PM May some slack to ease her political pressures.

Elsewhere in the currency space, the Argentinian peso tumbled to a record low after President Mauricio Macri asked the IMF to speed up disbursements from its $50 billion credit line to ease the country’s finances.  This spilled over into some selling for a time of the Turkish Lira, the Mexican Peso and the South African rand, not to mention some background headwinds for the AUD.

US-Mexico-Canada trade news was also getting a run with Canadian Foreign Minister Freeland saying that she’s optimistic on progress this week, PM Trudeau chiming in, saying that there is a possibility of a NAFTA deal by Friday.

The big mover in the commodity space, WTI and Brent up 1¾% on the back of another larger than expected weekly drawdown of US crude inventories. Elsewhere, the LMEX base metals index declined 0.31% (copper was down 0.99%), gold was little changed while the bulks were softer.

It was a quiet night for economy news, the US revising up slightly Q2 GDP from 4.1% to 4.2%, ahead of expectations it would be shaved to 4.0%.  US Pending Home Sales declined 0.7% against expectations it would rise 0.3%.  With another positive night for equities on both sides of the Atlantic (in the main; more records in the US), bond yields generally inched a little higher, in well-worn ranges. Aussie bond futures were accordingly two points heavier in price. 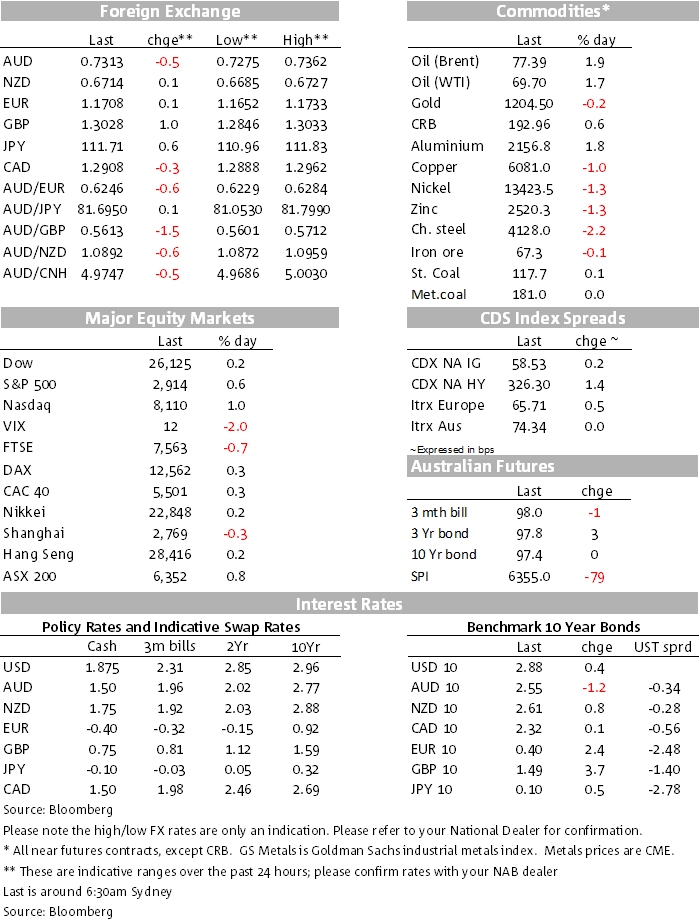