The FOMC lifted interest rates in the US this morning with the expectation of another hike in December.

In the beginning I misunderstood, But now I’ve got it, the word is good – The Beatles

Markets trod water ahead of the FOMC and with the Statement and projections in line with expectations we have seen limited reaction post.  The removal of the word “accommodative” did elicit an initial wiggle in UST yields and the US dollar, but with the dot projections unchanged for 2018,2019 and 2020 and affirmation by Fed Chair Powell that the removal of the word “accommodative” didn’t mean a tighter policy path ahead, markets settled down into the close. UST yields drifted lower with the move led by the back end of the curve, the USD is little changed and US equities ended the day modestly lower. CAD is the G10 underperformer following Canadian officials suggestion that a NAFTA deal is unlikely to be agreed before this week’s deadline. This morning the RBNZ left its policy rate and guidance unchanged as expected.

The Fed raised the Funds rate by 25bps to a range to 2-2.25% as expected and removed the word “accommodative” in the Statement, the removal of the word was a nod to the widely held view that the policy rate is getting pretty close to neutral. That said no longer been accommodative, does not mean policy will be turning restrictive with the Fed’s projections for the Funds rate essentially the same as before. Another hike in December looks like a done deal with 12 of 16 members now favouring a move (in June we had 8 out of 15), the median dots for 2019 ( 3.125%) and 2020 ( to 3.375%) are unchanged and still suggests three hikes should be expected next year and two more in 2020. The market currently prices around a 75% probability for a December hike and almost two more hikes are priced in 2019.

It is also worth noting that in order to raise the median forecast for rate hikes next year to four, at least four FOMC members need to lift their forecast, so for now that looks like a high hurdle. As for the new 2021 dot, like 2019, the median dot is also at 3.375%, but with a wide 2.125%-4.125% range. Finally the longer-Term dot was raised to 3% from 2.875%, may be reflecting an improvement in productivity (as per fed Brainard’s view) and also may be reflecting the inclusion of a new dot from Fed Clarida.

Outside of the removal of the accommodative policy stance, the Statement was basically unchanged. That leaves the FOMC describing economic activity rising at a strong rate, while the labour market, household spending and business investment have all grown strongly. GDP forecasts for 2018 were raised to 3-3.2% from 2.7%-3.0%, while 2019 was pushed up from 2.2-2.6% to 2.4-2.7%. That likely reflects growing suspicion the tax cuts and reforms have a way to go yet before the supportive impact fades. Growth returns to a level more consistent with trend of 1.8%-2.1 in 2020, before 1.8%-2.0% for the longer-run.

Although the USD went up and then down post the FOMC announcement, the net effect sees the USD almost exactly where it was prior to the announcement. In G10 AUD is little changed and it has essentially erased yesterday’s intraday gains which came about from a jump in Chinese equities and a better than expected NZ business activity/confidence readings. The AUD now trades at 0.7262 with the downtrend line from the late January high still unchallenged. A weekly close above 0.7285/00 is now needed to get tech analyst excited that a break higher is likely.

NZD is also little changed after no surprises from the RBNZ, the Bank left the OCR unchanged at 1.75% and still expects to keep it steady right the way into 2020 (as per what it said last time). The RBNZ also retained its up-or-down language around the OCR’s next move. In spite of an acknowledgement to the strong Q2 GDP print, the RBNZ still sees risk of GDP growth not doing well enough in the future. Overall, a balanced statement, which keeps options open and as we expected. NZD now trades at 0.6663.

The CAD has come under pressure overnight following news that this week’s NAFTA deadline could come and go without a deal. Speaking in New York PM Trudeau said that  “We will keep working as long as it takes to get to the right deal for Canada,”. The U.S. has said it will sign a deal with Mexico by the end of November, with or without Canada. CAD now trades at 1.30, 0.50% lower relative to levels this time yesterday.

US Treasury yields were drifting lower ahead of the FOMC announcement and after an initial spike, the move lower in yields continued into the close with longer dated tenors leading the way. 10y UST yields ended the day 5bps lower at 3.048% and the 2y rate closed  down 2.4bps at 2.817% with a net curve flattening result. The 2y10y curve now trades at 23bps.

US equities ended the day lower with all three major indices losing grown into the close and after the FOMC announcement. The S&P was -0.33%, Dow was -0.40 and NASDAQ closed -0.21. Early in the session European equities closed higher across the board and Chinese equities were the outperformers in Asia, buoyed by news that MSCI was considering increasing the weights of Chinese shares in its global indices

It has been a quiet night for commodities and notably  oil prices didn’t get much support from US Energy Secretary Rick Perry remarks that  U.S. strategic oil reserves won’t be tapped to expand global supplies 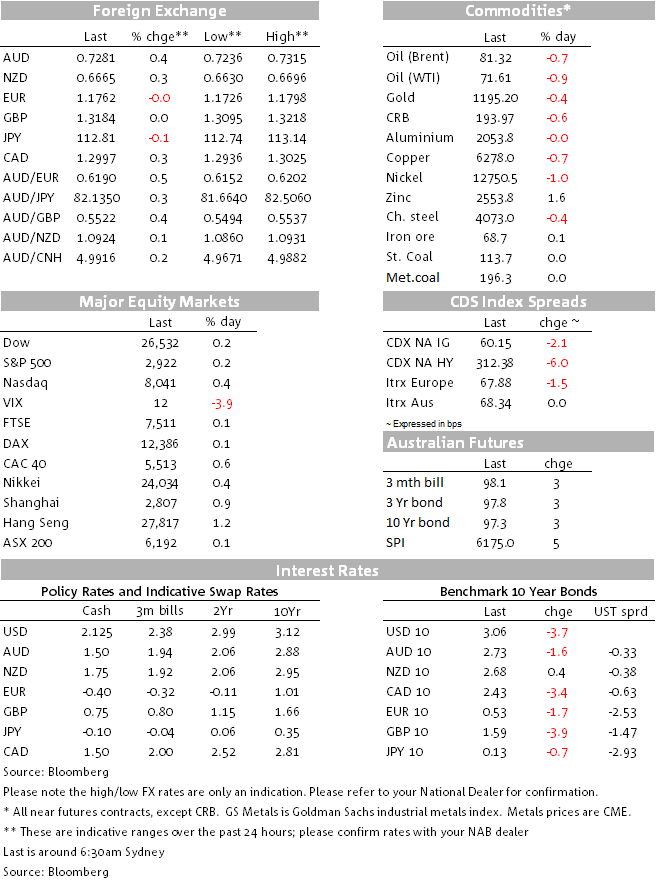