No further news on tariffs overnight calmed down emerging markets overnight and gave the Aussie dollar a short reprieve.

Markets overnight have been quite benign.  There has been no news on US tariffs from the White House and no first tier data to trouble the scorers.  Most major currency pairs have been relatively contained.  The AUD/USD has traded in a 35 point range since yesterday’s open, while equities have been mostly higher, with very little change in major bond yields apart from Italian bonds that have rallied further.

The big mover has been Sterling that’s had a strong opening to the week.  Notwithstanding some acerbic press commentary over the weekend from political protagonist Boris Johnson about the PM’s Chequers plan, Sterling has responded positively to another slug of conciliatory comments from head EU Chief Brexit negotiator Michel Barnier, offering words that would have been music to PM May’s ears.

Barnier told a conference in Bled, Slovenia that it was “realistic” and “possible” to get an agreement by the start of November to allow time for the deal to be approved by both the British and European parliaments. “I think it’s possible” to get a deal by the start of November, he said at the conference. “We are not far from agreement.” Despite still contentious issues to be resolved – the Irish border, getting the deal approved by the UK Parliament  two big ones – there’s been no denying the recent pattern of EU conciliatory gestures, testing the nerve of GBP shorts.  Barnier said last week that there are “lots of useful things” in the Chequers plan.

Separately, the FT reported that EU leaders would give new instructions to Barnier at the 20 September mini-EU summit to get a deal across the line, in the hope it can be agreed by mid-November (in time to be signed off by the respective parliaments).

Sterling immediately jumped by a big figure on the reporting of Barnier’s comments and is holding to its overnight highs.  With the AUD/USD range bound, AUD/GBP has pulled back to the mid 54s on the Sterling move.

Sterling’s gain spilled over into some support for the Euro that has also benefited from somewhat receding concerns over Italy’s fiscal policy.  There was a further sizeable rally in Italian bonds (10y yields eased 12.5bps to 2.91%) with Italian Finance Minister Tria saying over the weekend that the government recognised that a larger deficit would result in higher yields and greater interest expense.  The Milan stock market rose 2.30%, well above a flat FTSE and a 0.22% rise in the DAX.

There was only second tier data overnight, virtually nothing out of the US, several releases on the UK economy suggesting that growth remains choppy to positive into the September quarter.  The UK notched up a  much lower than expected trade deficit in July, monthly GDP for July rose 0.3%, up from 0.1% in June, industrial production in July rose 0.1% (F: 0.2%), but construction output rose 0.5% (F: -0.5%), together pointing to some positive momentum through the summer.

Speaking in Georgia, Atlanta Fed President Raphael Bostic (a voter on the FOMC this year) said that once the Fed gets to neutral, “let’s stay there and see”.  He also repeated some anecdotes suggesting that trade uncertainty was hampering investment and slowing the positive changes expected from tax reform, tariffs also adding to inflation.  He said that price increases is already happening in industries where tariffs went into place the earliest.

Other than rises in coal prices, it has been relatively contained.  The LMEX base metals index is down 0.17%, oil prices are little changed overall, soft commodities have been mostly higher, while gold has been steady.  In the bulks space, iron ore is lower, but coal prices have risen.  Bond yields are little changed. 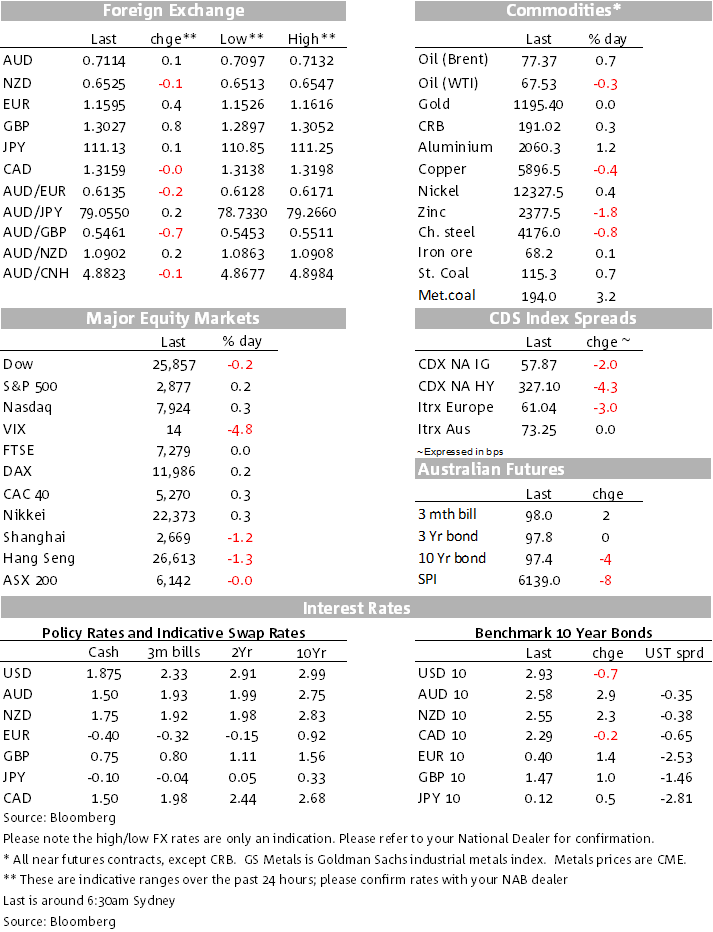