The week’s got off to a quiet start.

Overview: Ain’t got nothing’

Scenes of fire ripping through France’s Notre Dame Cathedral are currently capturing the world’s attention far more than anything going on in financial markets.

The ongoing decline in equity and currency market volatility has shown up in disappointing trading revenue in the quarterly earnings of both CitiiGroup and Goldman Sachs overnight even though both Wall Street titans exceeded their street earnings per share estimates (is it ever thus?). Weakness in the financial sub-sector has weighed on broader equity indices, though the S&P 500 has closed with a loss of just 0.06% (the Dow and NADAQ both by 0.1%). Strength in consumer staples, health care and consumer discretionaries have been the primary offsetting forces to the 0.62% drop in financials.

Bond markets have a quieter session after Friday’s relatively sharp run up in yields, US 10 year Treasuries are just half a basis point down on Friday’s 2.56% close and with very little by way of intra-day volatility to note. Incidentally, latest US ‘TICS’ (capital flows) data for February just released shows that while foreign central banks continue to sell down holdings of US Treasuries (-$16.5bn) foreign private entities continue to buy them (+$36bn), for now holding at bay the ‘twin deficit’ narrative that we continue to think will come back to bite the US dollar (and potentially US Treasury yields) at some point in coming quarters – or possibly only years.

US economic data hasn’t been a mover overnight, confined largely to the Empire (New York State) manufacturing survey which improved to 10.1 from 3.7 in March – this is still only half the level we were recording either side of year end however, while the prices related components were soft. We also had Chicago Fed President Charles Evans speaking overnight, who is lamenting the fact inflation looks to be back trending below 2% and say that the Fed could plausibly be on hold at least through the Autumn of 2020 (we agree with him).

In currencies, the ‘big’ mover overnight – a term we are now using advisedly such is the general lack of volatility – was CAD, hit by a weak Bank of Canada Business Outlook Survey, down to -0.6 in Q1 from 2.2 in Q4 2028 and to its weakest since Q3 2016.  Also March existing home sales, which at +0.9% failed to show much a recovery after a 9.1% plunge in February housing sales. The upshot is that Canadian money markets are now flirting more seriously with the idea of the next move in rates from the Bank of Canada being a cut (there are now 6bps of easing in the OIS curve for December 2019, from just 2bps at the end of last week).

FX moves elsewhere have be slight with the EUR, NZD, AUD, JPY as well as Scandinavia currencies all less than 0.1% away from where they were at the New York close (AUD/USD range has been less than 25 pips and is currently exactly where it was on Friday night, 0.7172).

RBA Minutes at 11:30 AEST which in the wake of the April   10th speech from deputy Governor Guy Debelle, will probably less interesting and market sensitive than they otherwise might be. A key paragraph in the most recent Minutes was:

“Taking account of the available information on current economic and financial conditions and how they were expected to evolve, members assessed that the current stance of monetary policy was supporting jobs growth and a gradual lift in inflation (my emphasis). However, members noted that significant uncertainties around the forecasts remained, with scenarios where an increase in the cash rate would be appropriate at some point and other scenarios where a decrease in the cash rate would be appropriate. The probabilities around these scenarios were more evenly balanced than they had been over the preceding year.

In the post April meeting statement, the last paragraph was changed to read: “Taking account of the available information, the Board judged that it was appropriate to hold the stance of policy unchanged at this meeting (again my emphasis). The Board will continue to monitor developments and set monetary policy to support sustainable growth in the economy and achieve the inflation target over time”.

Given Debelle made clear last week that the last paragraph in the Statement was change to acknowledge the need to get a handle on the conflicting signals from GDP related data (weak), labour market data (still strong) and business surveys (somewhere in between). So it’s doubtful we’ll come away from the Minutes very much the wiser.  Thursday’s labour market data will probably be far more market sensitive

Also up in our time zone are China new home prices.

BAML, Netflix and Johnson & Johnson are among the S&P 500 companies reporting. 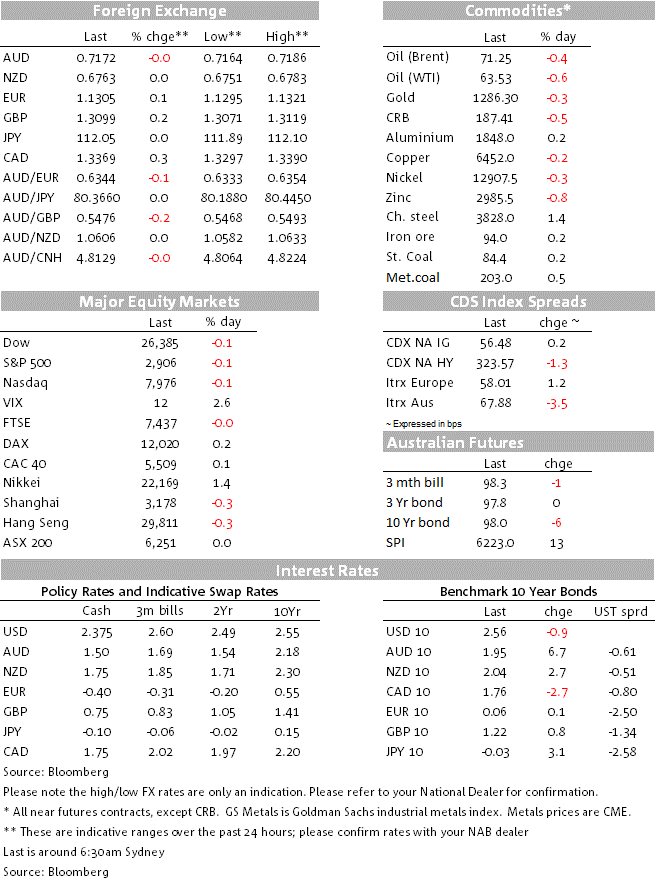