Markets Today: US consumers happy even as clock ticks on so many deals

US consumer confidence is the highest its been in 18 years, even as the US trade deficit worsens, largely through weaker agriculture exports.

While European equities had a mixed night, US counterparts managed to close with minuscule gains. The USD is flat in index terms and US Treasury yields are higher on the back of mostly solid US data releases. After yesterday’s comments by President Trump, that “it’s just not the right time to talk [to China] right now”, overnight Commerce Secretary Wilbur Ross said the US was focused on sorting out trade agreements in “our own neighbourhood” before moving onto China. AUD trades a bit softer amid market concerns over the lack of US-China trade talks progress while CAD and MXN give mixed signals on NAFTA. CAD outperforms on hopes Canada will join Mexico on agreeing a new NAFTA deal, but MXN more than reverses its recent gains amid concerns a new NAFTA deal may not get over the line.

CAD (+0.25%) and CHF (+0.345%) are the big performers over the past 24 hours with the USD little changed in index terms over this period. CAD appears to be benefiting from hopes that Canada will agree to a revised three way NAFTA deal. While there remain a number of sticking points between Canada and the US, including the protections afforded to the Canadian dairy sector, the market seems to be viewing recent developments positively for now.

MXN in contrast is down 1.69%, more than reversing gains achieved over the past couple of days and it is now back trading above 19. MXN underperformance can be attributed to numerous reports (examples here and here) suggesting the preliminary trade agreement with the US is far from complete and it still needs US Congress approval. In a nutshell it seems that many contentious issues remain unresolved and there is a very tight timeline that needs to followed if a NAFTA deal is to be ratified by the current US Congress.

Meanwhile the AUD has essentially traded sideways, after reaching an overnight high of 0.7362, the Aussie now trades at 0.7338, 0.19% lower to its level this time yesterday. AUD’s weakness can be largely attributed to a delay reaction to President Trump remarks denting expectations of a quick trade resolution with China. Yesterday Trump said that he doesn’t see a quick end to trade tensions with China adding that “They want to talk,”. But “it’s just not the right time to talk right now, to be honest.”. US Commerce Secretary Wilbur Ross reinforced this view overnight, noting US was focused on sorting out trade agreements in “our own neighbourhood” before moving onto China.

The EUR initially moved up towards resistance near 1.1750, but it has since retraced back towards 1.17 (+0.2% on the day).  Meanwhile, the GBP weakened 0.2% against the USD with the lingering risk of a ‘no-deal brexit’ continuing to hang over the market.  Overnight, Theresa May quoted the head of the WTO in saying “he said about a no-deal situation that it would not be a walk in the park, but it wouldn’t be the end of the world”, and she added “I’ve said right from the beginning that no deal is better than a bad deal.”  The market’s concern is that a no-deal brexit is being gradually destigmatized and can no longer be ruled out

Unlike the USD, US Treasury yields showed a bit of life in a night where US data releases were mostly better than expected. The July trade deficit was worse than expected, but consumer confidence and the Richmond Fed Manufacturing survey beat expectations (see more below). US Treasuries sold-off another 3bp and the curve steepened a touch. 10yrs are at 2.88% – still well within the 2.80-3.01% range that has held since early June. A 5y note auction met reasonable demand.

Earlier in the session, Italian yields rose to fresh recent highs of 3.20% following comments from one of the two Deputy PMs’ (Di Maio) that he could not rule out Italy breaching the 3% EZ budget deficit limit with the 2019 Budget. In addition Italian stocks fell after the other Deputy PM Salvini was involved in a stand-off on immigration over the weekend. Italian Finance Minister Tria has since said the the country plans to keep deducing its debt to GDP ratio and is not planning to breach the 3% deficit limit.

US equities managed to record small gains for the day, after trading in and out of positive territory during the overnight session. The S&P500 briefly rose above the 2900 mark for the first time ever, but closed the day at 2897. European equities had a mixed night, Japan equities recorded small gains and the Shanghai composite closed with a small loss.

Brent crude dropped 0.3% to $75.96 a barrel and WTI fared worse, losing 0.44% ending the NY session at $68.53. Metal prices did OK with the LMEX index climbing 0.92% and aluminium was the outstanding performer gaining 1.84%. Copper gained 0.48% on the back of reduce risk of supply concerns amid positive wage resolution in a Chilean mine. 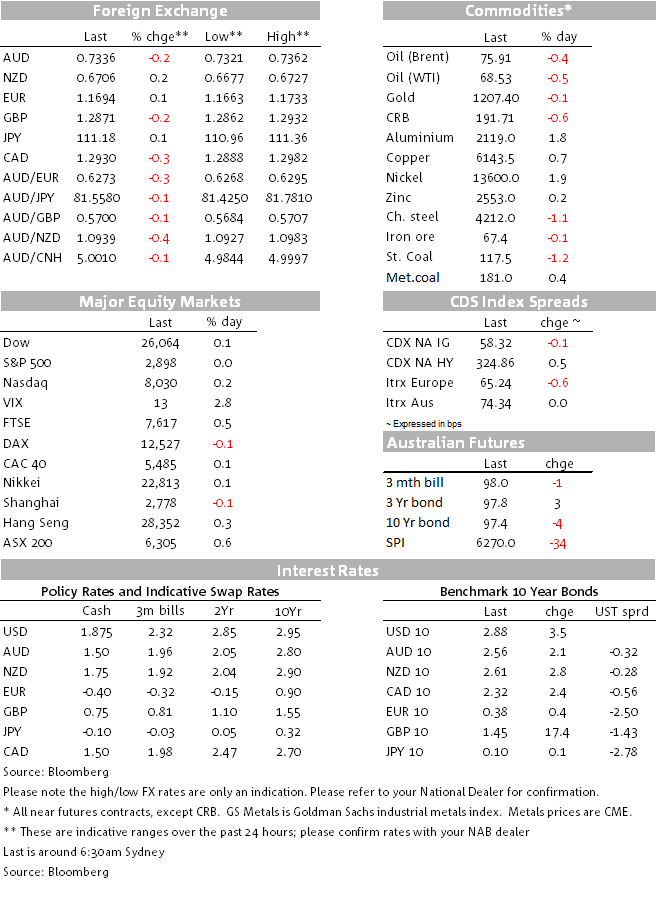