The positive news regarding China has seen stocks rise in the US today but there has been little movement on Treasuries or the US dollar.

On first impressions it has been a quiet risk positive night in markets, US equities have closed higher, 10y UST yields are little changed and the USD is almost exactly where it was this time yesterday. But just like Maxïmo Park’s The Undercurrents, there are a few themes simmering in the background suggesting not all is well. While commodity currencies are outperforming with the AUD leading the way, Italian politics are a concern in Europe and a weigh on the euro, GBP is the biggest G10 loser amid Brexit and political uncertainty and last but not least oil prices are higher amid heightened geopolitical tensions.

News over the weekend that the US will hold off on imposing trade tariff on China while negotiations remain ongoing has helped risk sentiment overnight with industrials and telecommunications shares leading the gains in US shares. US Treasury Secretary Steven Mnuchin has been on the wires stressing the good news while also reminding everyone that if the negotiations aren’t successful, “the president can always put tariffs back on,”. Not to be undone President Trump has also been busy tweeting, stressing that “China has agreed to buy massive amounts of ADDITIONAL Farm/Agricultural Products – would be one of the best things to happen to our farmers in many years!”.  That said, there has also been quite a lot of reports highlighting tensions within US top trade officials, US Trade Representative Robert Lighthizer and Director of Trade and Industrial Policy Peter Navarro lead a  group that wants to take a harder line with China and are more willing to use sanction even if they disrupt the market. Good and bad cop? May be, but worth noting that on a separate statement release overnight Mr Lighthizer  said that “Getting China to open its market to more U.S. exports is significant, but the far more important issues revolve around forced technology transfers, cyber theft and the protection of our innovation,”.

So while there is a cautiously optimistic theme coming out of the US, politics in Europe are taking centre stage and weighing on sentiment in the old continent. 10y sovereign Italian bonds jumped 15bps overnight and the spread to 10y Bunds widened another 21bps to 185bps. Italy’s Five Star and League coalition is aiming to form a government and met President Mattarella with relatively unknown Italian lawyer Giuseppe Conti being seen as a possible PM. The major concern here is that the coalition doesn’t have the money to fund its expansionary plan and the idea of introducing a new class of short-dated government notes (‘mini BoTs’) that would be created specifically to pay state arrears has spooked the market. This mini BoT’s are effectively like a parallel currency and could in theory circumvent the strict rules in the EU Stability and Growth Pact.

ECB’s Nowotny overnight said Italy’s plans are creating a lot of nervousness and hence it is not surprising that the Euro traded to a new year to date low of 1.1717. The equity led improvement in risk sentiment helped the euro recovered a little bit in the end and now the pair trades at 1.1790.The soft activity and inflation readings so far this year has seen the ECB shift its proactive stance to a more reactive wait and see mode. The euro has been on a steady decline since early April and now politics are an additional weight on the currency. The preliminary PMI data releases out on Wednesday, if positive, could shift the focus back onto the economy and help the euro in the process.

Meanwhile on the other side of the channel, the pound has come under renewed pressure with weekend press reports raising the possibility of an autumn election amid Brexit impasse within the Cabinet and the conservative party. Brexit negotiations resume this week and it is unclear if any progress has been achieved in terms of the Irish border and EU trade arrangement. The pound has been the worst G10 performer overnight, the pair traded to an overnight low of 1.3392, a level not seen since late December last year. Technically speaking GBP continues to prove a move below its trend line support of 1.31416, the pair now trades at 1.3431, but a move below its trend line support would open the prospects for an easier path for sub 1.30.

So amidst the EU and GBP political uncertainty, AUD has been the top performer overnight, gaining around 60 pips over the past 24 hours and the pair now trades at 0.7582. Risk sentiment has helped the aussie with the VIX index drifting down to 13.02 from 13.42, but the performance of commodities has probably been a bigger factor. Oil prices have remain supported amid geopolitical tensions and Venezuela’s woes, but it has also been a good night for copper (+1.13%),lead has outperformed (+3.43%) while coal and iron ore have consolidated recent gains. Based on our fair value model, we think the AUD deserves to trade a little bit higher with risk sentiment and commodities more than offsetting the negative influence from higher US yield.

Worth noting too that the AUD is not just looking comfortable against the USD. While NZD has also benefitted from the improvement in risk sentiment, the AUDNZD cross is back above 1.09 and from a technical perspective it still has room to move higher. EURAUD has now broken below its trend line and with Italian tensions unlikely to go away any time soon, the AUD can probably make more inroads against the euro. Similarly, GBP looks vulnerable and after decisively climbing above its 100 DMA the AUDGBP cross is also looking constructive. Last but not least ADUJPY, is now trading back above ¥84 for the first time since December last year. Higher US treasury yields and improvement in  risk sentiment have played against the yen and more of the same looks likely. USDJPY is back above ¥111 and also has room to move higher. 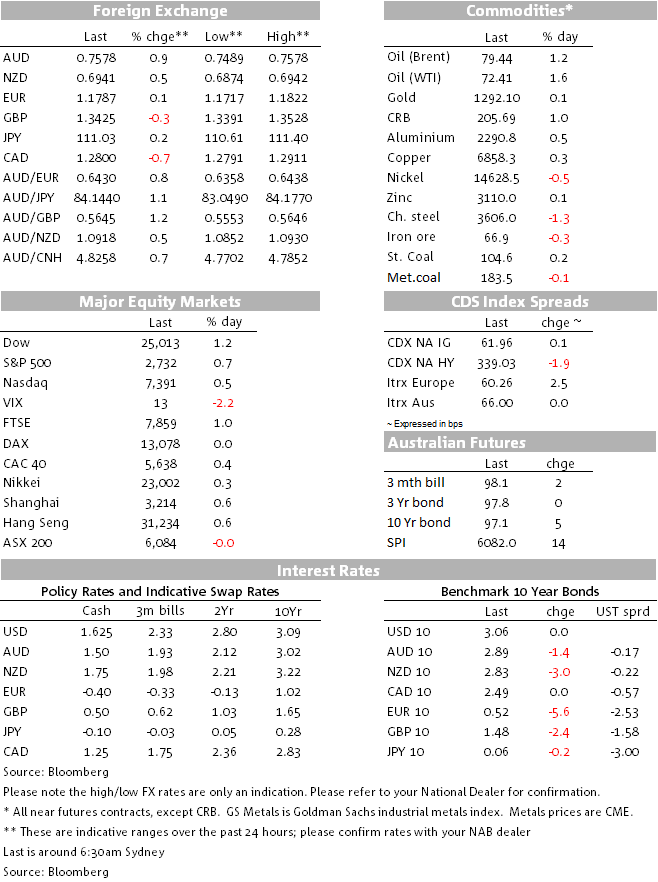