Markets Today: US warning on China & the Fed’s new neutral

President Trump has threatened China again, suggesting the prospect of tariffs at the year end is real.

Not often one can say there is a bonus to coming to work early, but this morning I had a dry run on my way in and I just missed the storm. For those in Sydney take it easy out there!…

Can you hear the drummer slowing? One step closer to knowing – U2

The market mood has turned cautious once again amid a flurry of trade headlines pointing to the prospect of a new round of trade tariffs ahead. European equity indices closed mildly in the red while US equities are trading in and out of positive territory. The USD is stronger across the board with Brexit news weighing on GBP while the kiwi is the sole USD outperformer on no news. UST yields are unmoved and for a change softness in the commodity complex has been led by copper and zinc with oil relatively stable. There was little reaction to Fed speakers with both Fed Clarida and Bullard noting policy is now “much closer” to a neutral.

The USD is still the king. After yesterday’s Trump threat to impose more tariffs on China if a deal is not agreed at the G20 summit this weekend, early in the European session the market mood briefly turned positive  following  a headline from China’s Foreign Ministry noting China and the US had agreed to reach mutually beneficial agreements (on trade), but then the mood quickly unwound when China clarified this was a reference to Trump and Xi’s call early in November. Then we had German headline  (Wirtschaftswoche) citing “EU sources” as saying a U.S. Department of Commerce investigation report was on Trump’s desk, adding: “Trump will possibly decide on tariffs as early as next week after the G20 meeting in Buenos Aires.”

So the market seems to be jumping at shadows at the moment and against this backdrop of uncertainty the USD remains the prefer option for weathering the storm. The narrower DXY index now trades at 97.35 (+0.28%) and it is just 20pips below the YTD highs reached half way through November. BBXD is ups 0.18% and is also close to its YTD highs.

The pound is at the bottom of the G10 pile, not helped by a flurry of mostly negative Brexit headlines. a) President Trump’s comments yesterday that May’s proposed deal could threaten a bilateral trade deal with the US didn’t help, b)DUP leaders have again confirm that they won’t support May’s Brexit plan, c) PM May could quit soon after Brexit day on March 29 would help to pacify Tories and d) according to senior Labour sources, Corbyn is close to agreeing that shortly (days) after the loss of the meaningful vote by May, he would formally make his party the champion of another referendum or People’s Vote – on the basis that if there is no consensus in parliament on what comes next, the question has to go back to the people’. So after all that GBP now trades at 1.2737 about one big figure lower on the day. All that said there appears to be a consensus growing on a willingness to avoid a hard Brexit. So if a hard Brexit is avoided, a deal or referendum  outcome suggest either way GBP is more likely than not to be higher in a few months’ time. The EUR was 0.3% lower to 1.1294, in sympathy with the moves in the GBP.

Relative to this time yesterday, AUD is little changed at 0.7225. The trade China headline referred above, saw the AUD briefly trade to an overnight high of  0.7269 while softer commodities later in the session appear to have contributed to the AUD’s overnight low of 0.72 on the figure. So true to form the AUD remains very susceptible to US-China trade headlines, as such more of the same should be expected ahead of the Trump-Xi summit this weekend. That said from a fundamental perspective the broader softening within the commodities space is something that we are watching closely, as trade tensions have intensified in recent months the resilience of Australia’s main commodity exports has been one factor supporting the AUD, So further softening in commodities deserve some attention. AUD FV model is starting to suggest the AUD is starting to look expensive.

The NZD has been the only currency to appreciate against the USD over the past 24 hours, albeit only slightly, and currently sits at 0.6790.  As we are about to press the send button, the RBNZ has published its  Financial Stability Report headlines are hitting the screen noting the Bank will loosen mortgage lending restrictions the start of next year – owner occupiers 20% (prev. 15%) and investors 30% (prev. 35%). Our colleagues in New Zealand note that at the margin easier LVR policy opens the door a bit more for (eventual) rate hikes

US equities have traded in and out of positive territory and now major equity indices are up between 0.20% and 0.30%. Trade tariffs headlines not helping sentiment with industrial and material shares the underperformers including Caterpillar and 3M.

Early in the session, the Europe’s STX 600 index closed 0.26% lower while its auto sub index fell 2.52% not helped by the Wirtschaftswoche headline suggesting US car tariffs could be on their way next week.

Moves in UST have remained pretty subdued with Fed vice Chair Clarida’s much-anticipated speech having little impact 10y UST yields now trade at 3.057% while the 2y rate is at 2.831%.

Clarida highlighted the robust fundamentals of the US economy but said that policy would need to be more data-dependent going forward given the Fed funds rate is “much closer to the vicinity” of neutral.  In contrast to his speech earlier this month, he didn’t mention risks to the global growth outlook, nor did he discuss recent market volatility.  A December rate hike by the Fed is still very likely (the market prices upwards of 80% chance), if for no other reason than it reaffirms the Fed’s independence in light of the criticism coming via the President’s Twitter feed.  But the Fed policy outlook in 2019 is more uncertain.  Fed Chair Powell’s speech tomorrow morning will be closely watched.

For a change oil prices are relatively stable ( Brent -0.15% and WTI +0.06%). Meanwhile Lead, Zinc and Copper are down between 2.1% and 1.5% dragging the rest of the complex into negative territory. 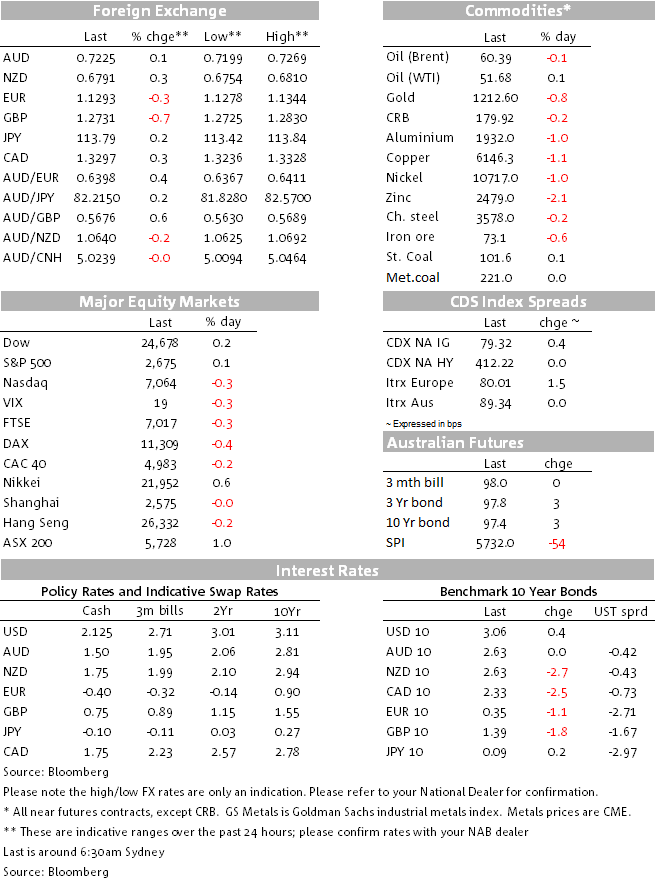 US equities rose sharply overnight despite the news unemployment claims in the US have risen to 3.2 million for the week to March 21.

Equities are on the rise in the US and Europe.

Markets Today: brief respite on hopes of US stimulus deal

Markets reversed a little overnight with US and European equities rising.