The markets are quiet ahead of tomorrow morning’s FOMC meeting. Meanwhile, there seems to be a further waiting game on Brexit and NAFTA.

Overview: Moving on up

Not a huge amount of market volatility overnight, as is typically the case in front of an FOMC meeting when a rate change, new economic projections, Fed ‘dot’ plot and press conference from the Fed chair are all on scheduled.  US yields continue their grind higher – to new post-May 2018 highs – as to do oil prices with Brent approaching $82.  But the US dollar in index terms continues to languish near the bottom of its mid-June to date range and contributes to the AUD going nowhere.  NZ Business confidence of particular interest for ANZ market this morning

Heading into today’s 2nd day of the FOMC meeting and where the outcome will be know at 2pm US East Coast time, 10-year US Treasuries have made a new post-May 2018 high of 3.11 (3.09% now). This is a 30bps increase on where we were a month ago before rates started moving higher, during which time the 2-year note yield is up about 26bps.

This surely means that any ‘hawkish tilt’ from the Fed tonight, whether in the form of upward revised growth projections for this year and next, a higher skew to the dot ‘plot’ (even if the median dots don’t move higher) and possibly even a lift to the Fed’s median view of the long run (neutral) rate, are by and large discounted.

And if the rates market wants to take a leaf out of the FX market’s reaction to last Monday’s news that more tariffs on China were definitely going ahead, a ‘buy the fact (i.e. lower yields) response to the Fed should not be seen as a big surprise.,  If we’re wrong, our rates strategists see 3.12-3.13% on the 10-year note yield as the significant level (the May highs) above which thoughts will inevitably turn to a move to the 3.25% round number level.

Higher bond yields have gone hand in hand with higher oil prices of late (Brent crude from $70 in mid-August to a high of $82.50 overnight – $81.50 now) though more than half of the rise in nominal yields has been in real terms (i.e. break-evens have risen by less than 10bps). Further signs perhaps that the move up owed something to expectations of a somewhat more hawkish Fed affair tonight.

On oil, President Trump was particularly belligerent in his comments about Iran in his address to the UN general Assembly a few hours ago as well as accusing OPEC of ‘ripping off the world’. Whether this contributed to the further move up in oil I can’t say, though on the other side we have reports of Europe working hard to be able to circumvent the approaching re-imposition of sanctions on Iranian oil exports come November.  Were they to succeed could mean less of a drop in Iranian output relative to the 2015 pre-sanctions lifting level.

Commodity prices elsewhere are mixed though base metals are mostly lower, including copper (-0.6%) and iron ore (-0.1%)

Oil and bond yields may be moving on up, but the big dollar is not.  The DXY index is -0.04% on the day at 94.15 so still languishing near the bottom of the range in which it has been confined since mid-June.  Indeed, higher oil prices and a lower US dollar is the historic norm, something we will putting a note out on shortly, in the context of rising expectations that oil could be headed back to $100 later this year. Watch this space.

The biggest FX mover in G10 overnight has been Sterling, up about 0.5%. This is on combination of: (i) Comments from German chancellor Merkel that a Brexit deal is still possible in October or November; (ii) the UK Labour Party conference and the possibility of 2nd referendum being endorsed as party policy in the event that Labour can’t succeed in bringing down the government and so forcing an early General Election; and (iii) Comment from BoE Vlieghe suggesting one to two rate rise a year (against the prevailing guidance suggesting only one).

The Euro gave back a little more of the gains seen after ECB President Draghi on Monday night comments that he sees a ‘relatively vigorous’ pick-up in underlying inflation, after chief economist peter Praet was out sating Draghi’s comments were nothing new.

A quiet night with US indices closing narrowly mixed, the Dow and S&P down smalls and the NASDAQ +0.18% so recovering a little of its recent underperformance that was driven by the likes of Alphabet and Facebook on antitrust concerns. 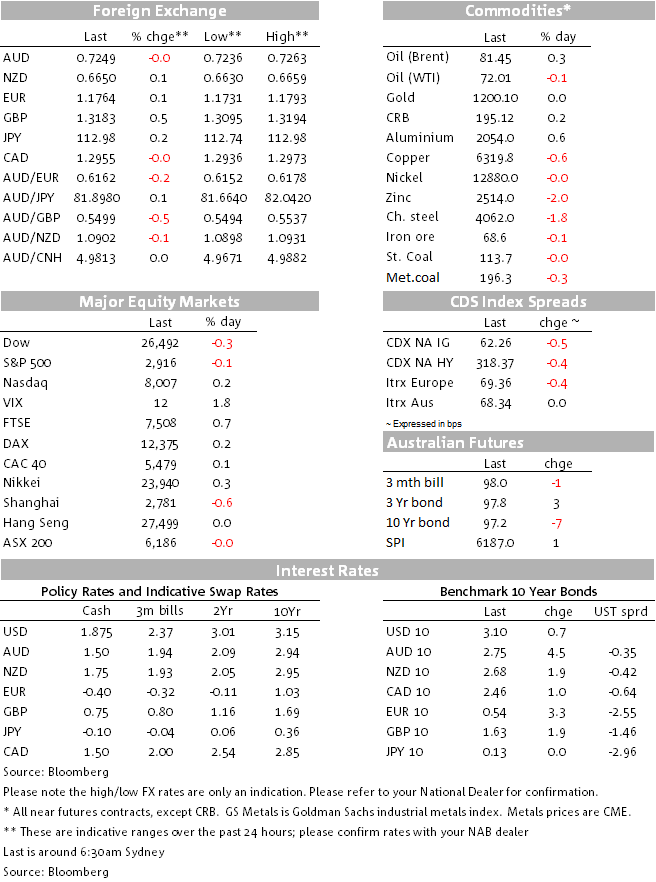