Take a closer look at the Chart 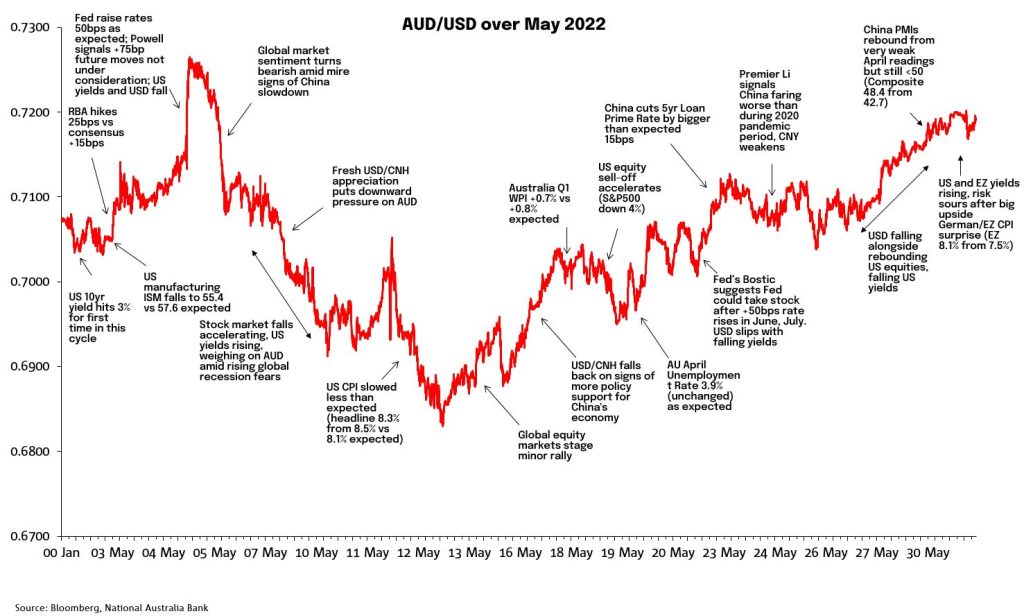 AUD/USD hit a near two-year low of 0.6829 on May 13 after hitting its highest May prints earlier in the month (0.7266, seen on both May 4 and 5).  AUD slippage from high to low reflected the influence of two key drivers – risk aversion and CNY weakness  – and which followed an early-month bout of USD weakness/AUD strength. The latter followed an ‘as expected’ 50 bps rate rise from the Fed but accompanied by comments from chair Powell indicating that bigger (75bps) rate rises were not under consideration. As a result, US bond yields fell back, hurting the USD.

AUD also drew a early-month support from the RBA initiating its rate hiking cycle with a 25bs lift to the Cash Rate (consensus had been for +15bps) and where RBA Governor Lowe described the 25bps move as signalling a return to ‘business as usual’.  Subsequently, large falls in US equities, culminating in the benchmark S&P500 index briefly entering ‘bear market’ territory with a fall of more than 20%, saw the USD attracting significant safe-haven support, in turn hurting AUD. Profit warnings from some major US retail chains and revenue warnings from Social Media companies, were part of the story.

Alongside, in China, the PBoC offered no resistance to fresh upward pressure on the USD/CNY exchange rate. The rise in USD/CNH from below 6.40 to around 6.60 between mid-April extended to above 6.80 early in May. These moves came in conjunction with more evidence of hits being inflicted on the domestic side of the Chinese economy from its ongoing zero-covid policy and lockdowns in large parts of Shanghai and Tianjin plus growing fears of a similar outcome in Beijing. The USD/CNH high point of 6.84 on May 13 coincided with the low point for AUD/USD on the same day, proof of the enduring correlation between CNY and AUD, evident since early 2017.

The AUD trend in the latter half of May was more upwards than downwards, driven by falls in the USD off its May 13 high. Here, a fall back in US bond yields was one key driver, following comments from Atlanta Fed President Bostic suggesting the Fed could pause to take stock after 50bps June and July rate rises and which received some succour in the subsequently released FOMC May meeting Minutes. Lower yields helped support risk sentiment/US equities in the latter part of May, in turn supporting AUD. After briefly touching 0.72, the very end of the month saw AUD slip back on souring risk-sentiment and a renewed rise in international bond yields following big upside surprises in May EU CPI data.

In month-on-month terms, our NAB Online Retail Sales Index contracted again in May.