The surprising nation that leads the world in innovation

Its population is under nine million but Switzerland has topped world innovation for nine years running. Why? 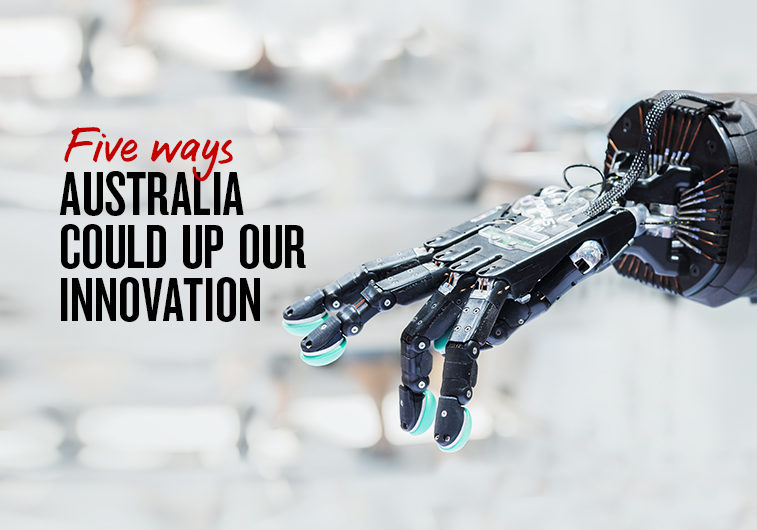 Black box flight recorders, spray-on skin, wifi – just a few of the revolutionary inventions Australia can lay claim to. But is that pipeline of innovation drying up?

In the two years since the Federal Government published its plan for Australia to thrive in the global innovation race, we’ve gone backwards. The latest Global Innovation Index, co-authored by Cornell University, INSEAD and the World Intellectual Property Organisation (WIPO), put Australia in 22nd position, down from 17th in 2015.

“It’s clear from the Index that this has nothing to do with our relatively small population size,” says Andrew Loveridge, Customer Executive, Emerging Sectors, Business and Private Banking at NAB. “Some of the most successful countries are very small, even in comparison with Australia.”

Switzerland, for example, has Europe’s highest number of patent applications relative to population size, with an impressive record of bringing innovative products to market. It invests heavily in innovation, particularly start-ups and new technologies – over 300 start-ups are founded each year. World-class Research and Development (R&D) establishments collaborate with educational institutions and universities, and there’s also a focus on the green economy including clean technologies and power production.

So what can we learn from those taking the lead?

Switzerland is well-placed to attract and retain talent, says Dr Massimo Garbuio, Associate Professor in Entrepreneurship at the University of Sydney. “For example, it pays well and offers a good quality of life.”

It also looks to nurture its talent. For his recent book, The 6 Blocks for Successful Innovation, Garbuio interviewed four leading innovators from countries including Sweden and Denmark. One of the most notable findings was the importance of supporting talent as it emerges.

As the war for talent continues to heat up globally, highly-skilled people are getting harder to find. Australian businesses could benefit by thinking ahead – recruiting people with potential then providing the education and training they need to develop critical skills. This could be the key to building a loyal team of innovators.

Switzerland has built a strong educational foundation and, importantly, a robust apprenticeship system. Nearly two-thirds of young people pursue a vocational program, and those who gain a diploma or certificate can take on professional education and training to prepare them for highly technical roles.

“Many will be equipped to help translate academic research into practical applications,” Garbuio says. “This may be the key to unlocking product and service innovation.”

Global research has found that businesses that invest more in their people’s training have more engaged staff, and that organisations with more engaged staff deliver better financial results. What’s more, according to LinkedIn’s 2018 Workforce Learning Report, 93 per cent of employees would stay at a company longer if it invested in their careers. Consider the learning and development opportunities currently on offer in your organisation or team. Is there more that could be done to formalise the offering, communicate it and increase your people’s learning?

There’s a chance that Australia is being hampered by its own good fortune.

“I once heard that resource-rich countries tend to be quite risk averse,” says Garbuio. “After doing my own research in this area I believe that’s true. I think that countries like Israel, Sweden and Switzerland, with few natural resources to fall back on, are more prepared to take the kinds of risks that drive innovation.”

The latest NAB Australian Business Innovation Index 2019, which measures how businesses are doing things differently, more quickly or more cost efficiently, found that Australian business leaders have become even less willing to take risks and explore new ideas in the face of tougher economic conditions. Heightened uncertainty around global trade tensions and growth is also weighing heavily on businesses as they focus more on shorter-term cost objectives and outcomes.

“Even at a larger or more established corporate level, many Australian businesses are excessively focused on the short term,” says Garbuio.

Garbuio believes that a cultural stigma attached to failure is another barrier to innovation.

“Failure still isn’t appreciated as a learning mechanism,” he says. “It’s getting better, but we are still a long way from Silicon Valley, Israel and some European countries.”

He is also concerned that management and boards tend to focus on compliance at the expense of big ideas and the long-term growth of companies for the benefit of societies at large.

“There has to be a balance of course – you can’t be all innovation and no compliance,” he says. “But, overall, there is too little of the former and too much of the latter.”

Another theme to emerge is the importance of collaboration.

This is something Loveridge is optimistic about. “We’re definitely seeing a trend towards more collaboration in Australia, with governments, academia and industry coming together in dedicated growth precincts,” he says.

Universities Australia Chair Professor Margaret Gardner has made it clear that, by tapping into university talent, business can source new ideas, get the jump on early stage research and cut the time it takes to bring new products to market. And modelling by Cadence Economics for Universities Australia released in 2018 demonstrated that the 16,000 companies already partnering with universities derive $10.6 billion in revenue from their collaborations.

The NAB Innovation Index found the outlook for innovation over the next 12 months is relatively positive, with around 40 per cent of businesses planning to invest more in innovation than they did in the past year. The new Australian Business Growth Fund could support this ambition.

“It’s just been announced that the four major banks, plus Macquarie and HSBC, will contribute capital to a fund to help mid-sized SMEs access finance,” Loveridge says.

“This is a very encouraging initiative. It will boost other sources of growth capital in the marketplace by providing capability support for innovative and fast-growing companies.”