Five years since switching from winemaking to vinegar-making, Ian Henderson has gone from being a one-man start-up to opening a multimillion-dollar world class facility to keep up with international demand. 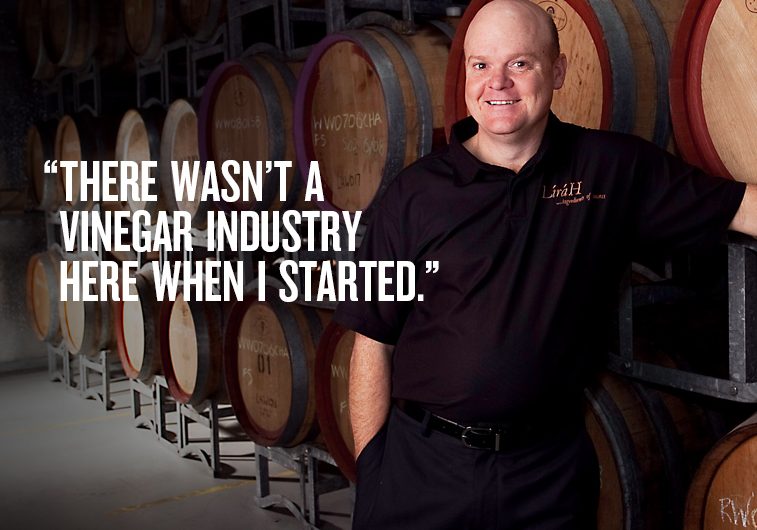 Winemaker Ian Henderson had never considered making vinegar, until he picked up the phone one day at his family’s Queensland vineyard.

“A friend from the US called to ask if we’d ever made vinegar, and would we consider making vinegar for their import business,” says Henderson, also a physics and mathematics graduate whose first career was in IT.

“I said, ‘Sure.’ I had some surplus wine, surplus equipment and surplus time, so I started to work at making vinegar.

“It took me 18 months to produce our first batch – ruining a lot of good wine along the way. I was self-taught from a German paperback I translated for reference.”

Twelve years later, Henderson heads up Stanthorpe-based Australian Vinegar, the business he’s grown from that first 100-litre barrel made in a dirt-floored shed into a booming multimillion-dollar enterprise that supplies hundreds of thousands of litres of quality vinegars to domestic and export markets.

Six months ago, Henderson took the business to a new level with the opening of a multimillion-dollar state-of-the-art production factory. Four years in the planning, the hi-tech facility increased Australian Vinegar’s production capacity twentyfold. Since moving in, the company’s production has already risen by 25 per cent and its growth has even Henderson pinching himself.

“Five years ago I was working on my own in a shed on my farm, making vinegar,” he says. “Today we’ve just built this facility that we’re going to scale up to 20 million litres a year – more than 20 times what we produce now. I have PhD university graduates on staff and we supply the biggest food companies in the world. It’s amazing.”

That first barrel, an Australian aged-shiraz vinegar, bottled and labelled by hand and shipped to the US, gave rise to the company’s first major break.

“I took it to a trade show in the USA, and the first person who came by was a buyer from a very large grocery store chain, Whole Foods,” recalls Henderson. “We went into 600 grocery stores overnight – and we’ve never looked back.

“My original goals for the vinegar business ­­– which I’d thought I could achieve in a lifetime – I achieved in one year. So I started setting the goals higher. Demand has never been an issue; it’s always been about capacity.”

A Churchill scholarship for vinegar-making was another boost, allowing Henderson to learn from the best in Europe.

“That was life-changing,” he says. “It gave me enrolment in a vinegar-making course in Austria, and eight weeks’ work experience in Europe. I came back with a vision of what a vinegar industry in Australia could look like. There really wasn’t a vinegar industry here when I started. I saw the future in Europe and came home to build that future here.”

“The knowledge I acquired enabled me to use the equipment I already had more efficiently – better, faster and more consistently,” he says. “I made a 1000 per cent improvement on our productivity with no change to our manufacturing equipment. We went from making a couple of hundred litres to 20,000 litres at a time with the same equipment. Education is the key.”

Over the next three years Australian Vinegar focused on meeting demand from its big US customer, but with increased production capabilities it was also able to supply the domestic market – primarily food manufacturers and then the food service industry, as chefs discovered that they could buy top-quality Australian-made vinegars.

These days, exports account for only around 15 per cent of Australian Vinegar’s business. With the new factory, however, Henderson is once again eyeing overseas contracts – in the US and North Asia in particular.

“Where we were in the frustrating position of having to say no to people – new customers and opportunities – we can now say yes,” Henderson says. “We’re able to go back into our expansion cycle. We’re especially excited by the great North Asian markets of China, Japan and Korea. We expect export sales to double within the next six months.

“At the moment, most of our R&D activity is in the health food space – developing health food products based on vinegar and proving their efficacy,” says Henderson. “Functional foods are the future – nutritional, healthy foods as medicine. That’s the next growth area for us.”