Why venture capital is more important than ever for investors

Venture capital is too important for investors to ignore as it occupies an increasingly large part of the global economy and provides opportunities not available elsewhere, experts told the 2019 Association of Superannuation Funds of Australia. 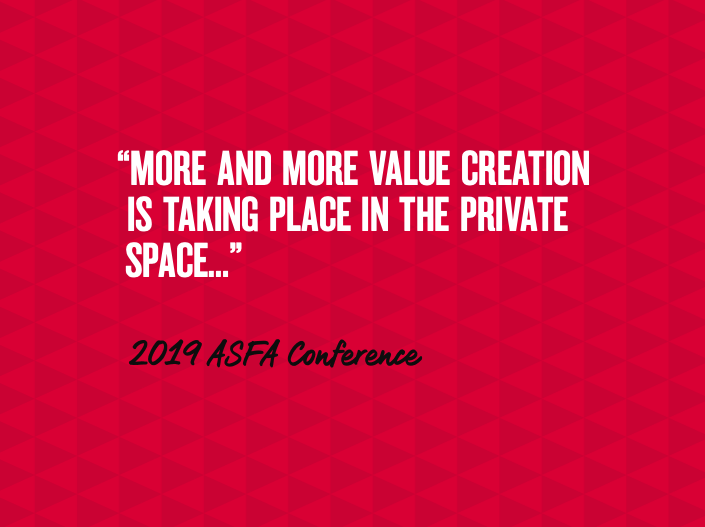 In a session titled Silicon Valley’s private market machine, the audience heard that private technology is expanding in three directions.

The first is that it’s affecting a wider range of industries. “When you go to Silicon Valley, you quickly realise there are areas like real estate tech, ports and logistics tech, government tech, defence tech, there’s tech for just about everything you can think of because you can apply software, data analytics and increasingly artificial intelligence to almost any industry,” one panellist said.

It’s also spreading beyond Silicon Valley, as the global tech hub runs out of space and other economies develop. Tech companies are popping up in Toronto, Texas, Beijing, Shanghai and Hong Kong, India, Berlin and London, to name a few.

Thirdly, private tech investment is spreading along the lifecycle of companies because companies are staying private for longer and delaying their share market listings. “More and more  value creation is taking place in the private space, so it just feels too big and too important not to get involved now,” an investment manager said.

There’s also the issue of shrinking listed markets. For instance, in 2007 there were over 8,000 listed companies in the US, but now that number is down to just 5,500.

The sector is growing in Australia, where there are 74 venture capital firms which between them manage A$5.6 billion and have made 1,200 start-up investments.

A new way of thinking

Venture capital (VC) also requires a new way of thinking for investors because the rules that normally apply in public investing often don’t apply to VC. There’s often no book value, discounted cashflow or even a market value because the market the investors are addressing doesn’t exist yet.

What separates a good VC fund manager from an ordinary one isn’t that they make fewer losses – even the best managers make a high number of losing investments – but the size of the “wins”.

“It’s only the hits that matter. Failures don’t matter,” the audience heard.

The graph of a successful VC fund looks like a hockey stick. The investments that go bust typically do so within a year or two, dragging overall fund to a loss position, and it can take six or seven years for the winners to move the fund back into positive territory.

“As an investor you have to be willing to ride through the first three or four years when the lemons have been harvested but the winners haven’t come in yet,” one of the panellists said.

He outlined the way venture capital investors think, saying they might only know five of 20 different things other investors would want to know, but are prepared to invest in a start-up based on the “fire in the belly” of the founders and that they’re developing an idea that’ll be big if it works.

“It’d scare the pants off most late stage investors.”

Investment managers will have to accept that life can’t always be forecast and the things that really matter in terms of changing the future are precisely those things that can’t be forecast.

In fact, investing in venture capital is a people business, because it requires company founders who have what it takes to ride through the pain and frustration of getting an innovative company off the ground. “It takes a special personality to be an entrepreneur and part of the job of an early stage investor is to assess that personality and the good investors I know spend a lot of time listening – they’re good at EQ,” one of the panellists said.

Less exposure to the economic cycle

One fund manager outlined the rationale for investing in venture capital. Investments are less exposed to the economic cycle and more exposed to the “technology cycle” and provide access to sectors which aren’t available anywhere else.

VC companies are probably disrupting sectors that investors own in other parts of their portfolios, so these investments can be an important source of information on a whole of fund basis, which can change the way the total portfolio is managed.

Finally, the increasing importance of the asset class means investors risk missing out on the strong returns it can deliver.

In terms of investment fees from venture capital funds there’s little choice but to accept them, be that  2 and 20 (a 2% management fee for the investment value and 20% of the gains) or even 2 and 30. One investor said there was room for these fees in a portfolio when fund managers deliver excess returns.

They warned that attempts to avoid fees by making co-investments direct into new ventures carry the risk of missing out on those one or two investments that produce the huge returns that lift a whole VC into positive territory.

There’s more optimism today that countries are reaching the peak of COVID-19, which is pushing US equities higher.

Australian wellbeing levels have fallen to survey low levels as anxiety climbs in response to rapid daily life changes due to Coronavirus.

Optimism is being driven by the infection and fatality curves for COVID-19 in Europe and the US.