March was a month of two halves for the AUD/USD.

March was a month of two halves for the AUD/USD. In the first half, the AUD/USD traded higher amid an improvement in risk sentiment boosted by expectations of a watering down of US trade tariffs on steel and aluminium along with easing of tension in the Koran peninsula. This backdrop saw the AUD/USD trade to a monthly high of 0.7914 on the 14th of the month. Then, news that the US was planning to impose import tariffs on Chinese goods along with the departure of key White House personnel heightened trade war concerns, denting sentiment and dragging the AUD/USD sub 77c for the first time since December last year (monthly low of 0.7644 on March 29). Late in the month, wobbles in US equities led by technology shares also weighed on risk sentiment and the AUD/USD.

The AUD/USD began the month on the back foot following confirmation President Trump was planning to impose trade tariffs on steel and aluminium. However, a few days later this downward force on the currency began to unwind following reports of tariff exemptions, which eventually also included Australia. News that North and South Korea had agreed to meet at a summit for the first time in more than a decade also boosted sentiment which was then further enhanced following news President Trump had agreed meet North Korean leader Kim Jong Un.

Half way through the month reports that the US was mulling import tariffs on China marked a turning point on the AUD/USD with the pair sliding almost 2 ½ cents in seven days. Sentiment was also dented by the firing of US Secretary of State Tillerson, which along with the departure of Gary Cohn as Chief Economic Adviser early in the month, raised concerns of a shift towards a harder line by the US administration in both trade and foreign affairs. Later in the month, comments by US Treasury Secretary Mnuchin that he was “cautiously hopeful” China tariffs could be averted helped sentiment, but US equity wobbles emerged as a new concern.

As for monetary policy, in March the US Fed lifted the Funds rate by 25bps to a range of 1.50-1.75%, as expected, and kept three hikes in the forecast for this year. Meanwhile, the RBA left the cash rate unchanged in March (now on hold for 19 months) and should remain on hold until it sees evidence of a decline in the unemployment rate toward NAIRU and a meaningful lift in wages. 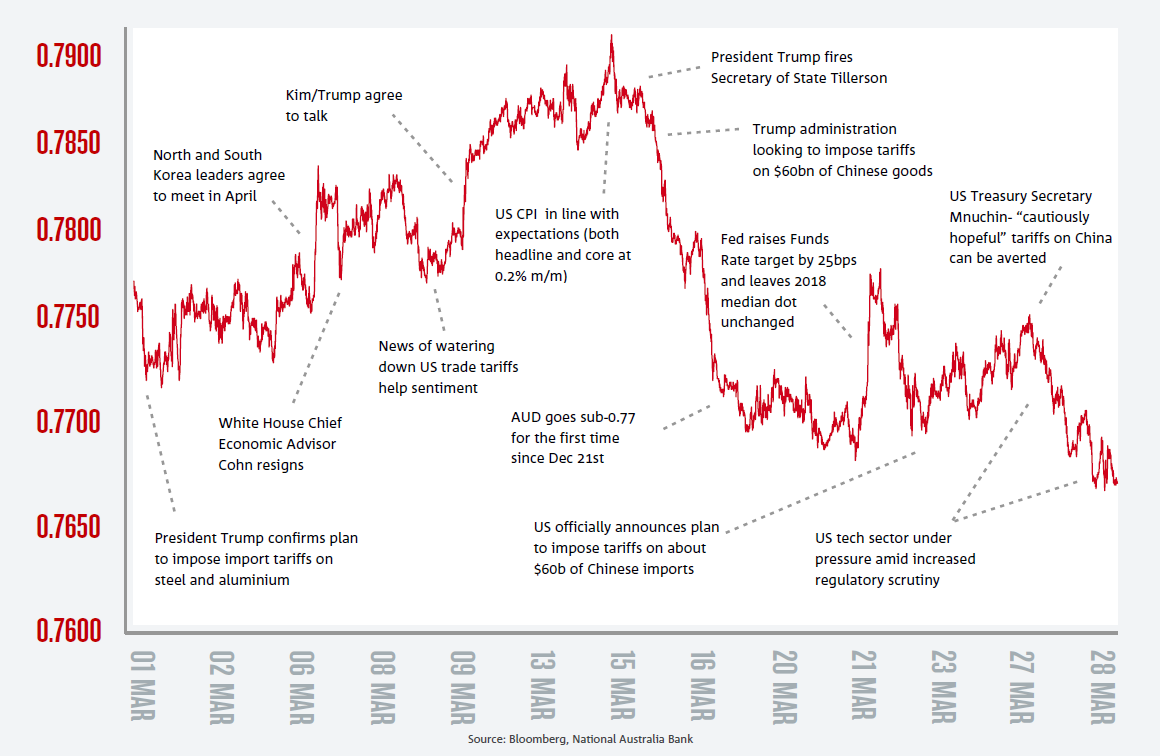 Our Short Term Fair Value (STFV) drifted about 1 cent lower during March, ending the month at 0.76. Meanwhile AUD/USD spot closed the month at 0.7679, little changed relative to the 0.7662 level recorded at the end of February.
In March, the AUD/USD was well contained within its +/-1.5 std. dev. fair value range with the decline in the STFV estimate largely explained by a decline in commodity prices.

Declines in Aluminium, our proxy for base metals, along with coal and iron ore prices weighted on our STFV estimate while rise in oil prices were an offsetting force.
Although quite volatile during the month, the VIX Index, our risk appetite proxy, was little changed and the AU-US interest rate differential had a small negative impact on our STFV estimate, as the Fed hike in March while the RBA was on hold again.

Markets Today: Turning up the rhetoric