Charge your glass: Aussie wine exports are on the rise

After surviving multiple challenges to their market share in recent years, the nation’s wine producers have bounced back and look set to enjoy vintage times.

Ten years after the Global Financial Crisis, the Aussie wine industry is once again on the march. In 2018, Australia ranked fourth in the world for wine exports – and 2019 got off to a flying start. Over the 2018-19 financial year, wine exports increased four per cent to $2.8 billion driven by a low Aussie dollar, favourable trade deals and China’s appetite for Australian wines. And it’s some appetite. China is the world’s fourth largest consumer of wine and the fifth largest importer by volume.

Data from industry group Wine Australia reveals that exports to China – including its special administrative regions Hong Kong and Macau – set a financial-year record, increasing seven per cent to a total value of $1.2 billion. Certainly, the removal of import duties on Aussie wine under the China-Australia Free Trade Agreement (ChAFTA) appears to have been a boon to local producers. At the time of writing, Australia is the top exporter to the country by value, having dethroned France, the traditional powerhouse du vin, in early 2019.

“ChAFTA has undoubtedly been good for Australian businesses exporting goods to China, and winemakers have certainly benefited from the deal,” Associate Director, Economics, at NAB Phin Ziebell says. 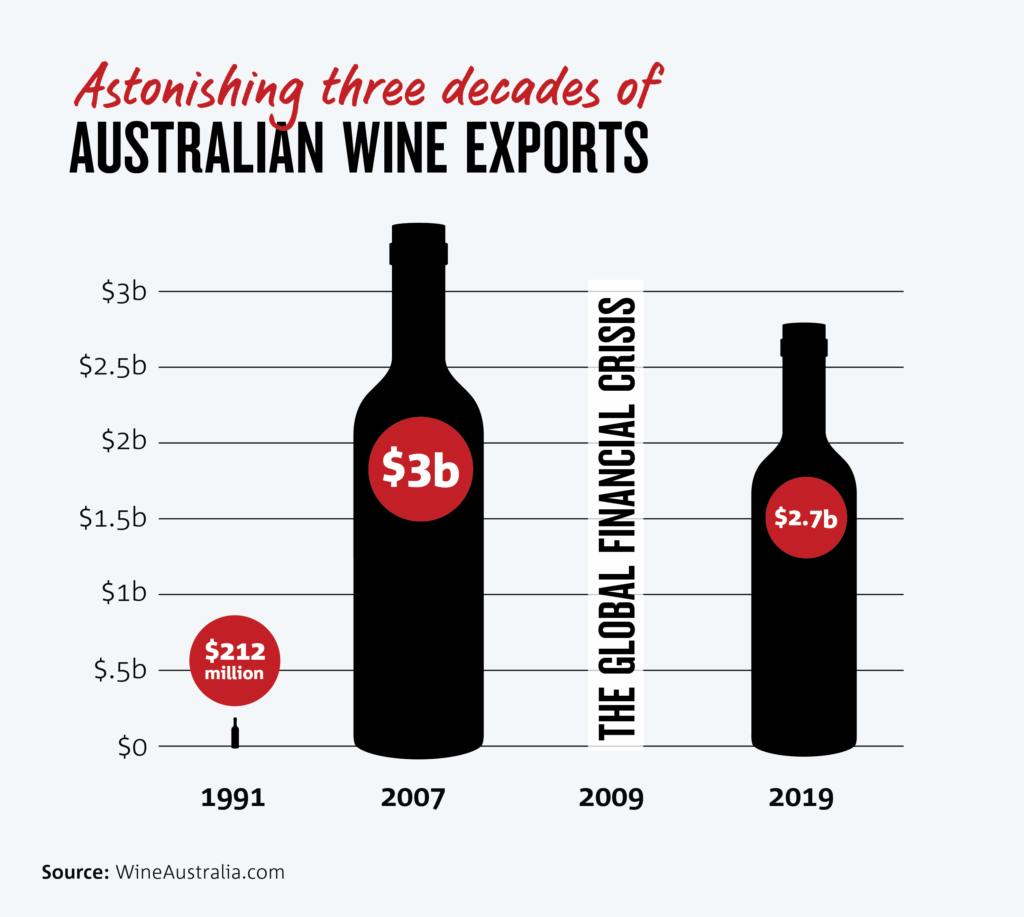 Making the most of Chinese demand

The performance of Aussie winemakers is impressive by any standard, but there is room for further growth.

According to the International Wine and Spirit Record (IWSB), China’s annual per capita consumption of wine has held steady over the past five years. In 2018, it was 1.2 litres. To put that figure in perspective,
US consumption sits at 9.9 litres per head while Australians drink almost three times as much per year (29.6 litres). But despite China’s comparatively modest rate of consumption, Wine Australia Market Insights Manager Peter Bailey sees plenty of upside for Australian exporters.

“The rising [Chinese] middle class has certainly made a significant impact on the growing population of wine drinkers,” Bailey says.

Indeed, Wine Intelligence reports that China’s population of urban, upper-middle drinkers of imported wine has been growing at 15 per cent annually since 2012. If that trend continues, and China’s burgeoning middle class continues to expand, there will be a significant increase in demand for imported wine. The big question is: could Aussie winemakers cope with such an increase? 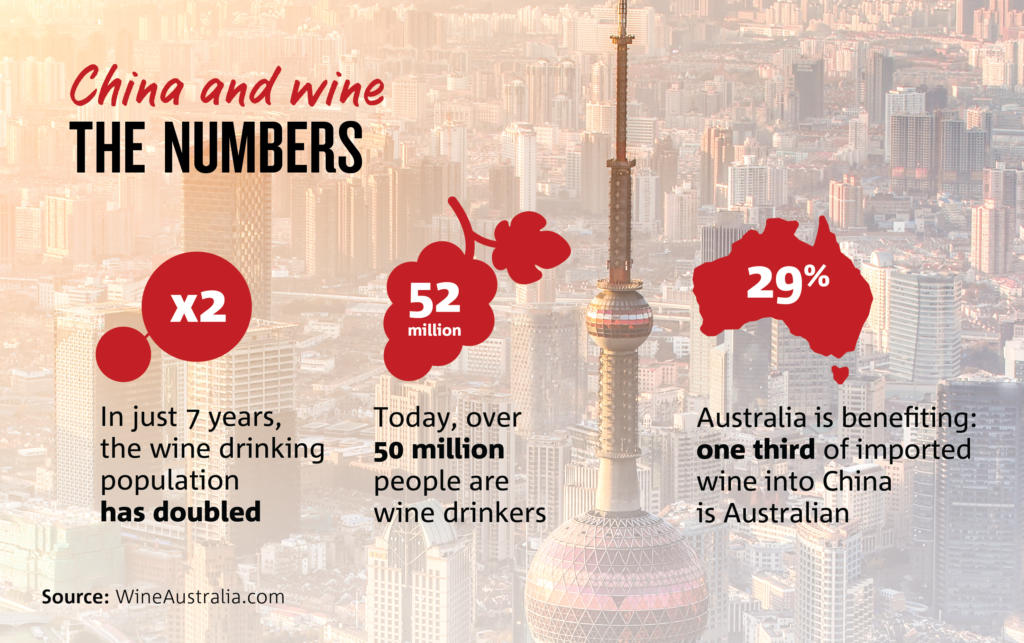 Are we primed for success?

The impacts of climate change and drought have been felt by Australian growers from Margaret River to the Barossa and beyond. While there has been speculation that the current drought could lead to some great wines – dry conditions give rise to smaller grapes, which typically boast more intense flavours than plump, well-watered grapes – the general consensus is that climate change presents a real challenge to the local industry. Bailey, however, cautions against alarm.

“Australia has a history of stable conditions and, with harvests consistently within five per cent of the 10-year average of 1.76 million tonnes, is well aligned with demand,” he says.

Moreover, many winemakers are ahead of the curve on climate change. Over the past several years, winemakers have begun experimenting with different varietals to deal with changing climatic conditions, while others have diversified their operations and established vineyards in places like Tasmania.

So, what should winemakers be focusing on as they size up export opportunities? According to Ziebell, it comes down to one word: quality.

“My overall sense is that we’re not really positioned to compete on price,” he says. “While there is good margin to be made on bulk wine, that margin will come under increasing pressure, so we’re more likely to do well when we focus on quality.”

Ziebell’s thinking is supported by the evidence, with top Australian wines highly regarded among Chinese, American and European consumers. The challenge for winemakers is selling more of it, which comes down to tactics.

In the United States, a change of tack is needed if Australian winemakers are to regain market share. In 2007, Australian exports to the country were around $1 billion. Today, the figure is less than half that as a result
of the Global Financial Crisis, increased competition and a high Australian dollar during the mid 2000s. But things are starting to improve.

“The value of exports to the USA appear to be slowly turning around,” Bailey says.

For the year to June 2019, exports to the US increased by two per cent in value to $432 million, even though the overall volume dipped slightly. Interestingly, the average value increased six per cent to $2.83 per litre, which suggests that Australian winemakers might do well to focus their energies on the upper end of the market. With young US consumers spending more on wine, and premium wines selling well, Australian producers might be well advised to target those who routinely spend upwards of US$15 a bottle. Of course, the opportunities for local winemakers don’t end with China or the US. Australia exported to 125 markets in 2018-19 and plenty of them are primed for further growth. However, there are a number of emerging markets that enterprising exporters are already looking to. Thailand, Brazil, Russia, India and the United Arab Emirates all rate a mention in Wine Australia’s reporting thanks to their sizeable wine-drinking populations and favourable economic conditions.

However, the best news for exporters has to be NAB’s Exchange Rate Forecast, which sees only modest increases in the value of the Aussie dollar over the next few years.

“The low Australian dollar, more than any other factor, has helped Australian winemakers significantly, and that trend looks set to continue,” Ziebell says.