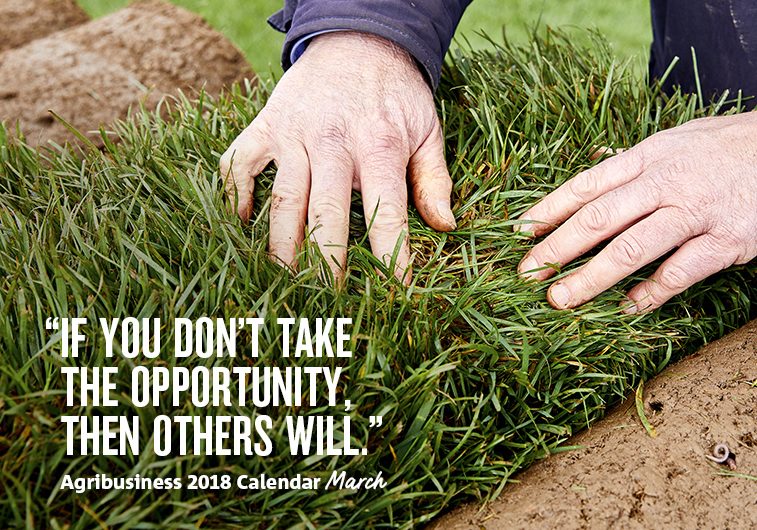 It all began with Hamish and Gavin Sutherland’s grandfather farming sheep and cattle in Victoria in the 1940s. Twenty years later, their father Ross began to grow the first turf seeds on the same property for the home lawn market.

When Hamish and Gavin came home from university with degrees in financial administration and farm management, they brought new life, determination and dreams to the business, establishing the HG Turf Group in the 1990s.

“We wanted to do more than just supply home lawns and commercial jobs,” explains Hamish. “We wanted to get into the sports market.”

From backyards to world-class stadiums

The sports market, however, wasn’t easy to crack. To supply world-class stadiums, you need a ‘ready-to-play’ surface, unlike residential turf which lacks the stability and consistence of ready-to-play stadium turf. They also needed advanced logistics to grow, transport and lay the surface quickly, sometimes overnight.

As Hamish explains: “We had to find the right surface, so we looked at technologies being used in overseas stadiums and there was a technology in the US that we were able to license. In 1998, in collaboration with US-based The Motz Group, we started off by offering this technology to our multi-purpose stadiums in Australia.”

Very soon the brothers improved the US technology and patented Eclipse Stabilised Natural Turf, a natural grass with artificial grass through it, attached to a backing.

“Once the Eclipse is installed, it’s instantly stable, and it’s supplied in a roll that’s 10 metres long by one metre wide. It’s 40 millimetres thick, so it’s heavy. Having the artificial fibre and backing in the roll creates a very stable surface as soon as you lay it. It doesn’t need to root in before play,” Hamish says.

The pair took the product to the Australian stadium market, selling its benefits and demonstrating that they had the knowhow and expertise (through their partnership with Motz) to install it quickly. Then, with the right product and partner, they decided to go big and pursue the stadium turf contracts for the Sydney Olympic Games in 2000.

“It was new technology for our market, so we had to work with the market – introduce it to them and let them understand it. When you’re dealing with organisations like the Sydney Organising Committee for the Olympic Games (SOCOG), they want to limit risk; they have big expectations and tight programs to meet.”

When the company finally secured the contract for the Sydney Olympic Games, there was no time for trial and error.

As soon as the lights went out on the opening ceremony, the HG Sports Turf team had to come in and begin laying the new turf, in readiness for the athletics and gold medal soccer.

HG Sports Turf had their own local resources, but also teamed up with The Motz Group for labour, with two crews working around the clock harvesting (cutting up and rolling the turf for transport to the stadium) and two crews installing.

“It takes a big workforce to fit out an Olympic stadium,” explains Hamish. “Our extended family chipped in; they helped with the meals and organised where the team were staying. It was a great family effort. We work together day in, day out, so you’d have to say we’re close.”

Adapting technology for the game

A big competitive advantage for HG Sports Turf is their ability to adapt their technology for the climate and the sport.

“We’ve innovated quite a bit,” explains Hamish. “We’ve developed a new product called HERO Hybrid Grass, and we’re now using that in the Asia Pacific and the Middle East, and selling this new technology to like companies in the UK, Europe and the Middle East.

One turf doesn’t fit all

Along with the Olympic Games, HG Turf has installed turf for the Commonwealth Games, the Asian Games, the Rugby World Cup and the Cricket World Cup, to name a few. Each installation has to suit the event and the venue.

“In multi-purpose stadiums, the pitch often has to support all their events. We have the philosophy that we’ve got to find the right solution for the customer; one size doesn’t fit all.”

When asked what their late grandfather, who started the original farm business some 80 years ago, would think of their success, Hamish laughs. “He would have enjoyed it, for sure. He, like us and our father, was an entrepreneur.”