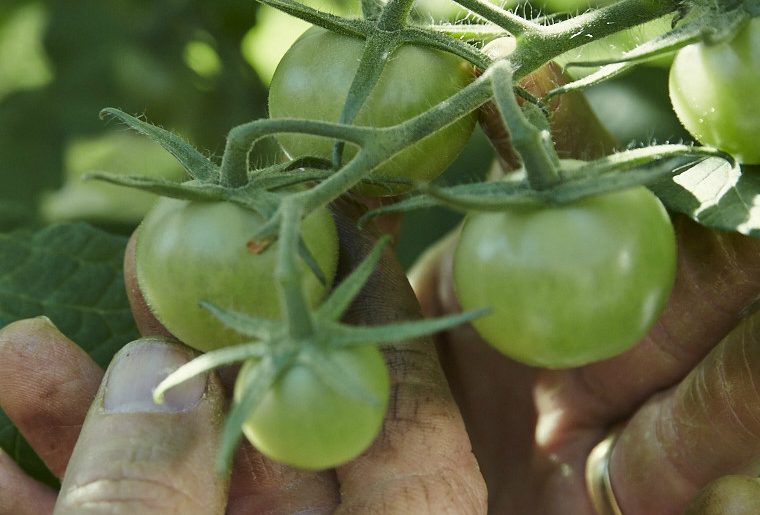 In the south of Tasmania the Cracknell family grows tasty, vine-ripened truss tomatoes most of the year. Nick Cracknell has used technology and sustainable practices to transform the family’s farm, increasing production almost fourfold.

Nick Cracknell and his wife Sue had been growing tomatoes in Tasmania’s Derwent Valley for 28 years when they decided something had to change.

“There’s a lot more pressure to grow for a longer season than when we started out,” says Cracknell. “When our oldest son Matthew joined the business we took a long, hard look at what we were doing and realised we had to modernise to survive.”

They decided to replace their low, poorly ventilated greenhouses with a state-of-the-art glasshouse heated by a biomass boiler.

“This enables us to grow tomatoes for most of the year, so we’ve practically quadrupled production,” says Cracknell. “As the boiler burns discarded timber from landfill sites we’ve also reduced our input costs, our carbon footprint and the amount of waste that was going to landfill.”

Run-off water is recycled and disinfected with ultraviolet light, which leaves the nutrients intact.

“As a result, we need much less fertiliser – a saving of about $15,000 a year,” Cracknell continues. “We’re also looking closely at ways of capturing energy, whether that’s solar or wind power, as a way of reducing our energy costs.”

The Cracknells can now control the growing environment 24 hours a day to achieve rapid and even growth, with tomatoes ripening on the vine.

“I was very concerned that we’d lose flavour when we stopped growing the plants in soil,” Cracknell says. “Instead, we’re constantly getting letters, emails and phone calls from customers telling us how much they love the taste.”

The way of the future

The Cracknells have about half a hectare under glass. This is quite a small area by mainland standards but big enough for them to supply all 32 Tasmanian Woolworths supermarkets with vine-ripened truss tomatoes for most of the year. And, as the farm is only five minutes from the company that transports product to Woolworths’s distribution centre in Launceston, tomatoes can be delivered the day they’re picked.

“I’m convinced now that hydroponics and greenhouse horticulture, or protected cropping, as it’s known, is the way of the future,” says Cracknell. “It’s grown by leaps and bounds over the past decade – the farm gate value in Australia is well over $3 billion a year.”

As he gets closer to retirement, Cracknell is encouraging his son to expand the business.

“Once you have the facilities, you can grow anything,” he says. “Tomatoes, cucumbers, capsicums, eggplants – the only limit is your imagination.”

Cracknell advises anyone considering the protected cropping industry to do a lot of research, ensure there are markets for what you want to grow and be prepared to embrace the latest technology.

“What we’re doing now bears absolutely no resemblance to what I did in the past. I’ve probably learnt more about the science of growing in the past seven years than I did in the previous 28.”

This article was first published in Business View magazine (Winter 2015). For more articles and interactivity, download the iPad edition of Business View for free via our app, NAB Think.

Podcast: What can we expect from the this year’s Federal Budget? Listen to Alan Oster, NAB Group Chief Economist, provide his Federal Budget Preview for 2020.

Find out how the 2020 Federal Budget could affect your business in our pre-budget round-up.