A landmark PPP refinance meets the needs of investors for a low-risk investment as well as the needs of borrowers for longer-dated debt. 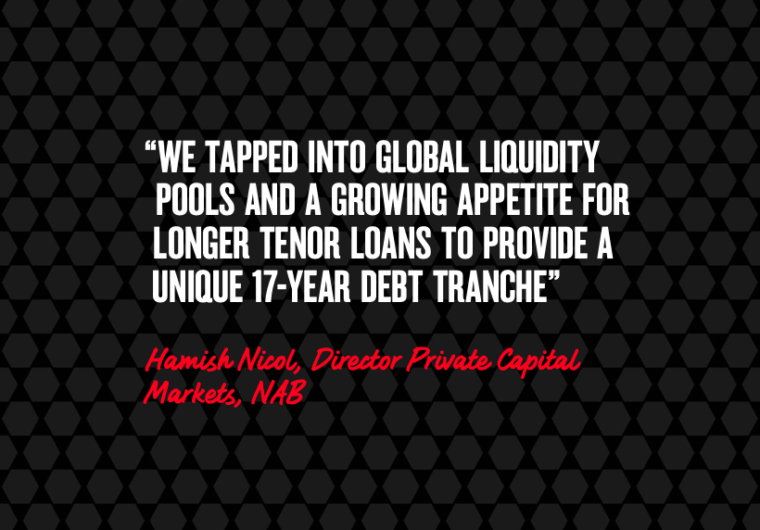 Issuers and investors are increasingly looking to longer-dated debt solutions than the Australian market has traditionally offered – providing greater certainty for issuers and more attractive yields for investors.

The 17-year refinancing of the AgriBio, Centre for AgriBioscience, in Melbourne taps into this trend and takes refinancing risk off the table for the research facility.

AgriBio – a joint initiative of the Victorian Government and La Trobe University – is Australia’s premier biosciences facility, supporting the agricultural sector by focussing on cutting-edge research to improve productivity, fight disease and reduce environmental impact.  It comprises of 30,000-square-metres of research laboratories, glasshouses and office accommodation for more than 400 scientists, students and support staff.

The facility came about as a result of a 2009, $288 million public-private partnership (PPP) between the Victorian Government and the Plenary Research consortium – comprising Plenary Group as financial arranger, investor and asset manager, contractor Grocon, services provider Honeywell and investors CDPQ and Palisade Investment Partners – to design, build, finance, and maintain the facility for 25 years.

NAB was a lender for the initial financing of the PPP, and so were a natural partner when it was time to refinance the $230 million facility last year.

“We were able to tap into global liquidity pools and a growing appetite for longer tenor loans to provide a unique, single 17-year debt tranche for the consortium,” said Hamish Nicol, Director, Private Capital Markets at NAB.

Plenary Head of Origination Paul Crowe said the structure is a first for a PPP refinancing in Australia. “Aligning the tenor of the refinancing with the end of the PPP concession completely removes the refinancing risk for the equity investors and the Victorian Government,” Mr Crowe said.

Along with providing certainty for AgriBio, the deal has allowed Plenary Research to lock in the base interest rate and the margin at the current attractive rates and liquidity is high for the remainder of the life of the PPP deal.

A flexible form of capital

By tapping into demand from global institutional investors for longer-dated debt, the deal overcomes the restrictive five to seven-year tenor that typically comes with Australian bank debt.

Demand for longer-dated debt has been spurred by prevailing low interest rates globally as investors chase yield. As a result, investors are willing to take illiquid unrated debt close to bond market rates for moving into a loan compared with a tradeable bond.

Non-rated, non-tradable debt has a couple of advantages for some corporates. Firstly, they don’t have to go through the distraction and expense of seeking a credit rating and providing financial updates. Secondly, they are able to keep the financing provision of their projects private.

The deal also marks a broadening of the liquidity pools that Australian projects can access.

Two or three years ago, most longer tenor funding into projects would have come from bonds sold to US life insurers via the US private placement market. While the USPP market remains an important source of funds, investors who need a more flexible form of capital now have a broader range of options.

The bulk of the funding for the AgriBio deal came from Japanese institutions, who are willing to invest at what look like competitive rates compared with their domestic rates. The funding was supplemented by funds from a domestic asset manager and from European institutions.

“We expect to see more of these project financing arrangements in the future, as they neatly bring together the needs of investors for a secure low risk investment with the needs of borrowers for longer-dated yet flexible debt,” said Vijendra Singam, Acting Head of Energy & Utilities at NAB.

In fact, NAB has already completed a similar transaction. Following on the successful AgriBio refinancing, Palisade has since used the same structure in the refinancing of the Hallett 1 Wind Farm in South Australia with a $160 million, 13.75-year debt facility. The loan was syndicated to institutional investors in the Japanese life insurance market and like the AgriBio deal, removes the refinancing risk.

These can be complex deals.

Our understanding of the AgriBio project and the sponsors meant we appreciated the structuring elements that needed to go into the transaction to make it attractive for them. It also gave us the depth of understanding of the underlying project and the credit settings to help make the investors we brought into the transaction comfortable with it as well.

We also brought together several capabilities from across the NAB Corporate and Institutional Bank to bring the deal to fruition – including long-dated swaps, project finance, and capital markets origination and distribution.

For AgriBio, the deal means they can put their focus into their important research supporting Australian agriculture.
Speak to a banker

Trends in card based procurement