Markets Today: A longer Brexit (maybe), a boost for US banks & a bad night for the AUD

Theresa May has won the confidence vote in her government, so she can battle on with Brexit.

The UK government has just survived the no-confidence motion tabled yesterday by opposition leader Jeremy Corbyn; to no-ones surprise hence Sterling is little moved. We now await the government ‘Plan B’ response to developments that are supposed to come by Monday, the backdrop to which is mood music coming out for Brussels suggesting that they will be amenable to a request for an extension of Article 50 – possibly until 2020 – so delaying the day when the UK formally leaves the EU beyond March 29 this year (if at all, of course).

Nothing has happened in the last 24 hours to dissuade us from the view that we are headed in the direction of an Article 50 delay, softer Brexit (than May’s Withdrawal Agreement implied) or no Brexit.  But it remains too soon to be buying Sterling with your ears pinned back, even if substantially higher levels are in prospect in coming months. After all, Jeremy Corbyn has made clear his no-confidence motion might not be ‘one and done’ with still some chance that members of the hard Brexit Tory ERG could yet decide that binging down the government is preferred to either a very soft or no Brexit scenario.

In the wider world, it’s proving to be a good night for US stock markets, with banks leading the broader indices higher after both Goldman Sachs and Bank of America/Merrill Lynch (BoAML) reported better than expected earnings, albeit both suffered from extreme Q4 market volatility in their FICC businesses. Within the S&P 5500, currently up 0.5%, financials are up 2.6% but no other sector by more than 0.75%. Ford lost more than 5% after revising down its full 2018 earnings guidance to $1.30 a share from the $1.33 prior street consensus.

US economic news has seen the NAHB Housing Index improve to 58 from 56, with the recent decline in mortgage rates (tied to the fall in longer term US treasury yields) cited behind the improvement.

The Fed’s Beige Book just released (ahead of the Jan 29/30 FOMC meeting) reports 8 out of 12 districts reporting modest to moderate growth with outlooks generally positive in most districts if as less optimistic than previously  All districts noted that labour markets were tight and that firms were struggling to find workers at any skill level. So no real signs of economic slowdown here. The Philly Fed survey will be the main economic point of interest tonight.

In FX, the NZD is currently the worse performing G10 currency of the past 24 hours, down just under 0.5%.  While our BNZ colleagues were fairly dismissive of yesterdays’ very weak credit card spending data likely to have been impacted by the fewer number of business days in December, there are some suggestions that weakness overnight might owe something to positioning in front of next week’s important Q4 CPI numbers and the risk of weak numbers.

AUD is also weaker (low of 0.7162) falling below the local session lows we saw after yesterday’s weak consumer confidence reading, perhaps for the same reason (Q3 Australia CPI is out of January 30th). There were also some comments from US trade representative Robert Lighthizer yesterday suggesting he’d seen little sign of movement from China on some of the key trade issues, which might have produced a bit of delayed reaction on AUD and NZD.  This morning we’ll get details of Australia’s November home loan data.

Bond markets see US 2-year Treasury yields up about 1bp and 10s +2bps, consistent with more positive risk sentiment.  Earlier Wednesday, UK gilt yields ended up almost 6bps at 10-years, on the view that risk of an economically debilitating hard Brexit have receded.

Commodities are all showing modest gains, be they oil, base metals, iron ore or precious metals, nickel (-0.4%) the one exception (see table below). 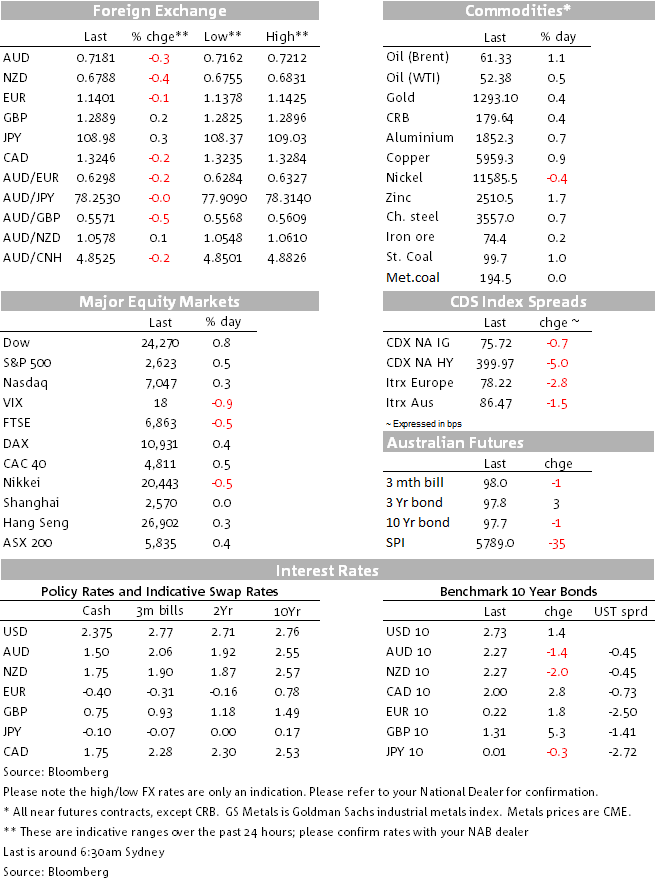 Australia’s population growth is expected to slow sharply over the next two years, primarily due to net migration given closed international borders.

Markets are waiting to see the outcome of two on again off again decisions, both with sizeable economic consequences.