What more can central banks do to help stabilise the global economy?

Overview: Back down south

US equities had another down day on Friday

Leaving the S&P 500 and NASDAQ with a third consecutive weekly decline. In spite of the risk off tone in equities, the USD and UST yields were little changed. GBP remains volatile, down on Friday, but outperforming on the week.

JPY and NZD are the other winners on the week while the AUD lost a bit of ground on Friday, but closed unchanged on the week.

Early in the afternoon session the S&P 500 and NASDAQ fell sharply, close to 2% and 2.5% respectively. There was no apparent reason for the swift move lower, but in the end both indices managed to recover a little closing the day down 1.12% and 1.07%. The declines on Friday erased all hopes for a tepid turn around in US equities, instead both the S&P 500 and NASDAQ recorded their third consecutive weekly decline. The S&P 500 is now down 5% for the month after gaining 7% in August while the NASDAQ is down almost 10% in September.

In a sharp contrast

The Chinese equity market had a good day on Friday and it was also comfortably the outperformer on the week. The Shanghai Composite and CSI 300 indices rose by just over 2% on Friday and gained a little bit more over the week. The CNY also had a solid week, up just under 1% against the USD. China’s economy is well ahead in turns of it recovery path out of the pandemic, not only in terms of economic rebound, but also in terms of the country’s ability to contain the virus.

Indeed part of the rationale for the turn in fortunes for the US and European equity markets may be due to the virus dynamics. The surge in virus infection in the US and Europe could be one reason for the  increase in in cautiousness by investors. After trending down below the 40k mark, US infections have crept up again, meanwhile in Europe France and Spain are recording daily infection numbers above 13k and the UK is just over 4k. UK Health Secretary Matt Hancock said the country is at a “tipping point” and more measures will be taken unless people comply with rules to contain the resurgent coronavirus. PM Johnson is expected to announce new restriction measures on Tuesday.

Elevated equity valuation probably also means that investors have become a bit more sensitive to uncertainty. So on this score we have to add the US elections early in November, plus the Fed’s decision to refrain from increasing its bond buying at the September FOMC meeting, which evidently disappointed some market participants, and the continued stalemate in negotiations over a new fiscal package.

So against this risk off backdrop in equities

Somewhat interesting to note is the relatively muted reaction in the rates and FX markets. UST yields and the USD did not enjoy a safe haven bid on Friday when US equities were heading back down south. On Friday,10y UST yields climbed 1bp, to 0.69% and looking at the week the UST curve had a mild bear steepening bias, but overall key tenors such at the 10y and 30y remained well contained within recent ranges.

Economic data releases didn’t elicit much of a market reaction

The US consumer appears to be in rude health with the final August reading comfortably beating expectations. The Current Conditions index rose 4.6, to 87.5, while Expectations rose 4.8, to 73.3, both are now at their  highest level since March. Interestingly, the write up on the survey noted that the survey improvements came in spite of increasing impact of the elections on expectations and said that volatility in the several months could step up based on how the election is decided and how timely vaccines can be obtained. The survey commentary plays to the growing view that risk assets are likely to face some turbulence ahead.

The USD was little changed on Friday, but looking at the intraday chart both the DXY and BBDXY indices gained a little bit of altitude late in the NY session. The DXY index looks to be forming a base just below the 93 mark and although the BBDXY index is still in a downtrend, it is off its lows.

GBP remains volatile, losing ground on Friday (-0.43%), but outperforming on the week (up close to 1%). Cable opens the new week at 1.2936, in addition to the virus news and potential reintroduction of lockdowns, EU-UK trade negotiations remain in focus as the October 15 ( hard?) deadline approaches.

JPY outperformance over the week has been the other big FX theme, USD/JPY now trades at ¥104.525, true to form the pair is showing its safe haven attributes, particularly when we look at the performance of US equities in recent weeks.

The NZD was another outperformer in the FX market

Despite the falls in equities (the NZD tends to be positively correlated with equity market moves and broader risk appetite).  On Friday, Finance Minister Robertson told Bloomberg TV that that the RBNZ had provided “clear certainty” by saying it won’t move OCR “until at least March next year. ”  Robertson’s response, which was simply a reiteration of the RBNZ’s forward guidance, caused a bit of activity in short-term interest rates, given the market has been speculating the RBNZ could cut as soon as February.  February OIS ticked up from 0.07% to 0.09%, bank bill futures rates increased by around 3bps and the 2-year swap rate by 1bp, to 0.05%. Robertson painted an upbeat picture of the economic outlook and said the RBNZ would take these positive factors into account “when they come to think about their decisions post March next year.”

The NZD reached its highest level since April 2019, very close to 0.68, early evening on Friday before paring those gains in offshore trading.  It ended up 0.1% on Friday and 1.4% on the week, at 0.6760, the second-best performer, after the JPY.

The AUD has essentially been a bystander, staying comfortably within its 0.7250 -7350 narrow trading range, that has confined the pair since September 9. Further declines in US equities are a risk for both the AUD and NZD, meanwhile RBA and RBNZ are also going to be in focus this week with deputy RBA Governor Debelle speaking tomorrow and RBNZ policy decision on Wednesday (see more below).

We also had a few Fed speakers providing us a bit more clarity on their own perspective over the Fed new AIT Strategy ( Yes we have new acronyms, in addition to QE, YCC and others, we now have AIT – average inflation targeting, its hard to keep up!!). In a written comments, Minneapolis Fed President Neel Kashkari, who was a dissenter on Wednesday’s FOMC rate setting, said that the  he felt, was setting itself up to make the same mistake it has in the past of reacting too quickly to inflation “ghost stories” and risked nipping off job growth too soon. Kashkari added that the Fed instead should switch its focus to core inflation, a slower moving variable that excludes volatile commodity prices, and ensure that it reached 2% on a “sustained basis.”

In contrast the other dissenter, Dallas Fed President Robert Kaplan argued the central bank should keep its options open to raise rates sooner if needed – a sign of the broad debate now taking place over just what the new framework will mean in practice.

Fed Bullard offered a slightly different perspective noting inflation may move higher on its own if, as he suspects, the economic recovery gains traction at a time when global supply chains are being reorganized, monetary policy is loose, and governments are issuing record levels of debt to finance pandemic-related spending.

In news over the weekend

The FT reported that the ECB had started a review of its PEPP (pandemic bond buying programme).  The review is expected to address how long the programme should run and whether older ECB bond buying programmes, which are running in parallel with the PEPP, should also be afforded more flexibility (like the ability to skew purchases towards vulnerable countries like Italy).  The latter is likely to meet strong resistance from the more hawkish members of the Governing Council. 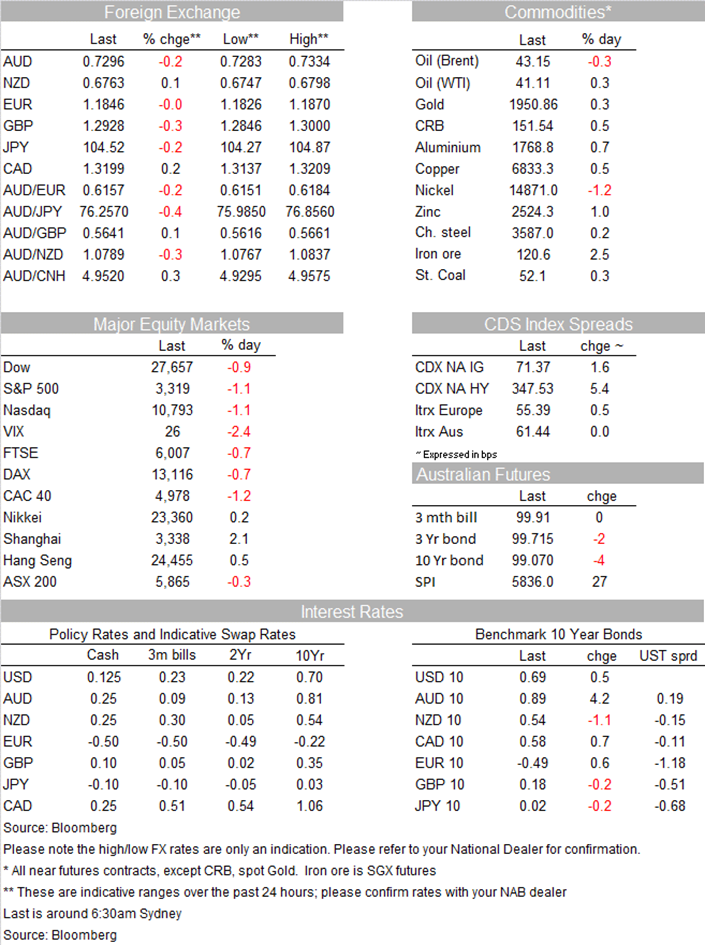