Markets Today: All eyes on Portugal, the Gulf & US

What picture will Mario Draghi paint of the European economy at the ECB forum today and what does he intend to do about it?

There’s been no let-up in concerns about trade tariffs overnight, quite the opposite in fact judging from comments from US Commerce Secretary Wilbur Ross and with the plunge in the NY Fed’s Empire manufacturing survey – linked to the Mexico tariff threat – a salutary reminder of what could be the impact of broadening tariffs to all Chinese imports and/or imposing tariffs on all auto imports, as Ross insists is still a distinct possibility.

Stock markets are generally unfazed by this – and too the news that Iran says it will beach agreed stockpile limits for low grade uranium in days as it tries to get Europe to muscle up to the US given its public position of still supporting the 2015 nuclear treaty. But if it does, doesn’t that just raise the risk of the US moving on auto tariffs, after the Mexico threat demonstrated Trump’s willingness to use tariffs to advance his geopolitical agenda?

The main piece of economic news overnight has been a record plunge in the NY Fed’s Empire Manufacturing survey, to -8.6 from 17.8 (11.0 expected). Superficially alarming, but largely explained by the fact that most responses will have been received in the week after Trump announced his intention to slap tariffs on all Mexican imports, and before he rescinded the threat on the evening of 7th June.

Nevertheless, the survey probably tells us something about how manufacturers across the country will react if Trump announces further tariff action against China – which will of course now be concentrated on consumer goods – and/or proceeds to raise the threat-level on auto tariffs (that Ross has said could be imposed on all auto imports, not just those from Europe). 10 days of hearings on the plan to tariff all Chinese imports began in Washington on Monday.

Also out last night was the NAHB homebuilders sentiment survey, which fell to 64 from 66 against 67 expected, the tariff threat also cited in responses.

US equity indices have all ended in positive territory (only just for the Dow and S&P, more so for the NASDAQ). Sector wise it’s a very mixed picture; financials have fared worse (-0.9%) while energy, real estate and communications sectors are all up by over 1%.

US Treasury yields are higher in a mild bear flattening move, 2s up by 2.7bps and 10s by 0.7bp to 2.09% (the latter a move that had already occurred during our time zone yesterday).  This is as the FOMC kicked off its two day meeting (outcome at 4:00 AEST Thursday) and where there is a fair bit of chatter around that the Fed won’t be dovish enough out of the event, even though no-one expects them to come out swinging and endorse prevailing market pricing for the best part of 100bps of rate cuts over the coming year or so.

In FX, it’s the GBP followed by the AUD that sit at the bottom of the G10 scoreboard, the latter to a low of 0.6849, a year-to date (ex flash crash) low but still just above the 0.6828 January 2016 low post-GFC low.  There’s been nothing news wise to knock the Aussie, as best I can tell. EUR/AUD demand could be to blame.

GBP/USD has lost another half a cent or so on top of the nearly one-cent drop last Friday, As we head into the next round of the Tory party leadership ballots on Tuesday. Ongoing concern that Boris Johnson will emerge victorious and try to march the UK out of the EU on October 31st, and that if he can’t it may end up precipitating a General Election, look to be weighing. Yesterday the British Chambers of Commerce warned that British companies look set to cut their investment by the most in 10 years in 2019 as the Brexit saga drags on.

There not a lot of movement elsewhere.  The PBoC continues to set the daily CNY fixes such that there is no inclination for the market to take USD/CNY or USD/CNH higher for the moment (i.e. pre-G20) while the US dollar in general look to be in holding pattern ahead of the FOMC outcome, DXY ranging between 97.40 and 97.60.

In commodities oil is actually down by over one percent despite the Iran news, base metals are mixed while iron ore futures are 0.2% down. Gold is little changed at $1,338.

The RBA June meeting minutes are the local highlight this morning, but after Governor Lowe’s speech straight after the June 4th rate cut, it’s unlikely we’ll be much the wiser on whether July, August or later is the most likely date for another cut, that Lowe said at the time was ‘not unreasonable’ to expect.

We also have a speech by Jonathan Kearns, Head of Financial Stability, at the Property Leaders’ Summit 2019, Canberra (09:15 AEST)

AU House prices (Q1, ABS version) – will be seen as very outdated given monthly Core Logic data (the latter shows prices in Sydney stabilising and even rising slightly in the aftermath of the election).

Draghi is due to speaks at the Sintra central bank conference (18:00 AEST) and later on panel including the BoE’s Carney (00:00 AEST). One point of interest is whether he will endorse the suggestion from former IMF chief economist Oliver Blanchard who spoke in Sintra last night and said the ECB has little room to act if the economy falls into recession and that fiscal policy is the weapon that should be used in the next crisis.

Final EZ HICP (preliminary was 1.2% for headline, 0.8% for core, both expected unchanged on this). Of more interest should be the latest German ZEW survey

The US has housing starts 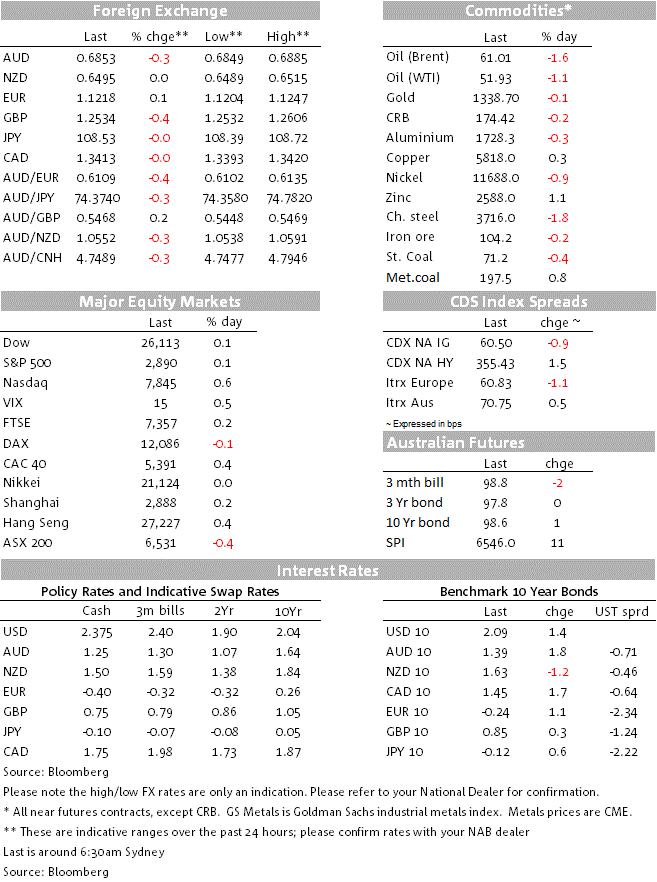