Markets Today: All the ex-President’s men

There’s absolutely no surprise that Donald Trump has been acquitted in Washington,

Overview: Lift me up

The US 10yr yield closed above 1.20% for the first time in almost a year as markets continue to price reflation and hedge for inflation risks. Around half of the 4.5bps move in the 10yr yield came in the wake of the 1yr inflation expectation reaching a 6½ year high out of the Uni Michigan Consumer Confidence survey, highlighting the market’s wariness of inflation lifting on the back of aggressive stimulus.

Such as aggressive stimulus may become more widespread with Treasury Secretary Yellen urging G7 countries to “go big ” on fiscal support on Friday.

Equities for now remain unperturbed by yield moves in what was a quiet Friday ahead of the 3-day US holiday with the S&P500 up 0.5% to a new record high. FX moves were modest with the USD (DXY) +0.1%.

The AUD was little moved on Friday +0.1% to 0.7761, reversing the weakness seen in the wake of Victoria’s 5-day lockdown.

Reflation and inflation fears remain the major theme for markets

Trump’s acquittal in his impeachment trial (entirely on party grounds with only 7 Republicans crossing the floor) now allows politicians to focus back on stimulus.

Democratic House Speaker Pelosi said she expects the House to pass the $1.9 trillion bill before the end of February, where it is likely budget reconciliation will see it in the Senate with approval by early to mid-March.

There has been little public push back on the spending envelope by moderate Democrats, suggesting the final package is likely to be close to the 1.9 trillion envelope in the end.

Markets accordingly have likely shifted their expectations higher on the final envelope from where they were earlier in the week. Fiscal stimulus is also unlikely to be just isolated to America, with Treasury Secretary Yellen calling on G7 countries to “go big” on fiscal support.

On the week 10yr yields are up 4.6bps, with around half of that (2.8bps) driven by the implied inflation breakeven which closed at 2.2263%. Some of Friday’s moves came in the wake of the Uni Michigan Consumer Confidence survey where the 1-year inflation expectation rose to a 6½-year high of 3.3% (from 3.0%).

The more important 5-year ahead expectation though was unchanged at 2.7%.

It is likely the move in the 1yr expectation reflects higher oil and gas prices, though will be worth watching closely for any sustained moves, while the reaction in markets highlights the degree of wariness around inflation.

Looking at the charts

A further lift in yields is possible on inflation fears with not much resistance on the charts between 1.20% and 1.50%.

GBP remains one of the better performers, up 0.3% on Friday and up some 0.8% over the past week.

UK Q4 GDP rose by double market expectations at 1.0% q/q, while vaccine news in the UK is positive with one report noting the latest COVID19 reproduction factor or “R0” value dropped to 0.7-0.9, the lowest since July, giving confidence that the UK is getting on top of the infection rate.

Although the AUD was little changed on Friday

Over the week it was the best performing, up 1.1%.

The NZD remained range-bound all week and was flat for the day around 0.7220.

Draghi officially became Italy’s latest Prime Minister with a big majority, after winning the backing of almost every large political party and giving the country hope for the future.

EUR was tightly range-bound and finished the week at 1.2120

Employment on Thursday dominates domestically with consensus of +30k jobs in January and for the unemployment rate to tick down one-tenth to 6.5% from 6.6%.

NAB sees upside risks and has pencilled in an above consensus print of +50k jobs and a fall in the unemployment rate to 6.4%.

Supporting the case for a strong print was the PM announcing that JobSeeker numbers fell 100k in January, while the JobKeeper program may have kept some people employed who would have normally been seasonally retrenched in the holiday period.

Retail Sales on Friday is the other significant piece of data with consensus at 2.0% m/m with NAB broadly similar at 1.5%.

The RBA Minutes are also out, though we are unlikely to glean any new insights given Governor Lowe’s extensive remarks in recent speeches and in testimony.

Most focus will be on the proposed US $1.9 trillion stimulus package and how likely this is to pass via budget reconciliation – latest guidance is early-to-mid-March.

The focal point will likely be the FOMC Minutes on Wednesday.

A few media outlets have noted that Fed Officials are looking to refine their newly adopted average inflation target, including on the suitable averaging period and whether there is a ceiling, in order to help clarify uncertainty around the inflation outlook.

As for tapering talk

That has been firmly pushed into 2022 by recent Fed talk, though the Minutes will likely contain some discussion.

Some insights on the Fed may be gleaned from speeches by Rosengren, Brainard, and Bostic.

US Retail Sales, PPI and Industrial Production are out on Wednesday.

For Core Retail Sales the first increase since September is expected with consensus at 0.9% m/m.

The Global PMIs on Friday will provide insight into momentum as countries continue to ramp up their vaccine progress.

No data domestically and it is very quiet offshore given the Lunar New Year Holidays in many parts of Asia, including in China and Hong Kong.

Japan is the exception with Q4 GDP figures.

It is also quiet in the northern hemisphere with the US out with the Presidents Day Public Holiday. Details below: 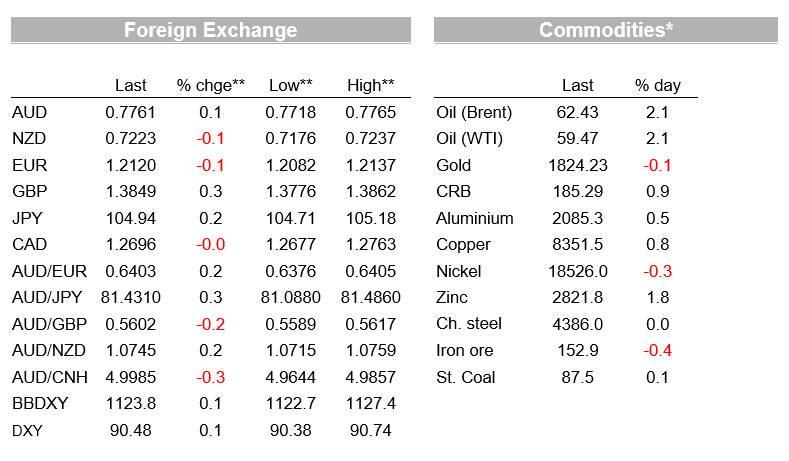 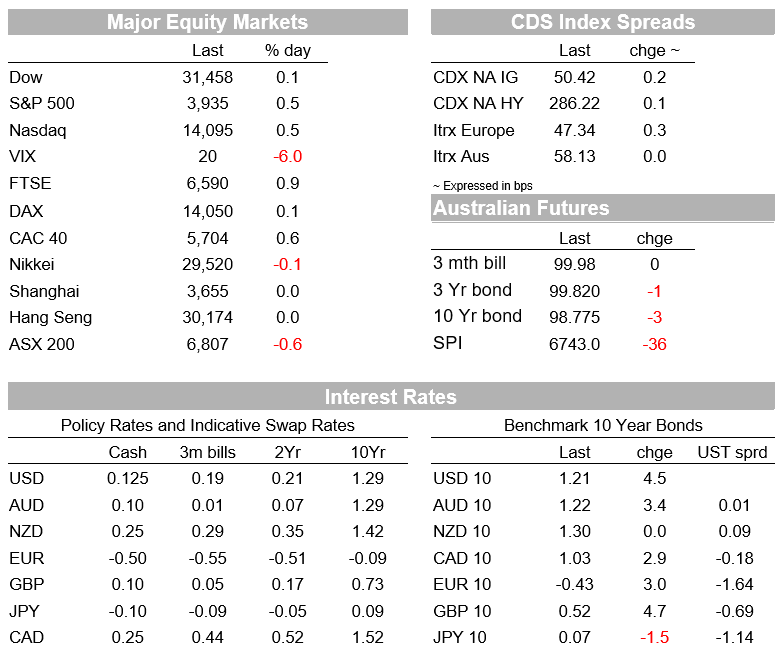