President Trump has indicated if no stimulus deal is reached he’ll use his executive powers.

“Don’t you worry child” was Swedish House Mafia’s 2012 dance hit. Little known is that the song was actually an Australian inspiration, being developed during their 2012 Australian tour. So it was overnight with markets not overly worried about the lack of progress on a US fiscal package with Pelosi reassuring “we will” have an agreement. Equities closed higher with the S&P500 +0.6%, brushing off the soft European session (Euro Stoxx50 -0.9%). Helping underpin sentiment was the surprisingly sharp fall in US Jobless Claims (1.186m v 1.4m expected and 1.4m previously) and the US State Department lifting its advisory against all international travel. In contrast bonds were little changed with US 10yr yields -1.2bps to 0.54%, while gold continued its rally +1.6% to $2,063. The USD was also little changed (DXY -0.0%) with GBP reversing gains following the BoE with Governor Baily clarifying negative rates are “in the toolbox”. Commodity currencies outperformed with the AUD and NZD best performing in G10 FX, both +0.5% with the AUD currently sitting at 0.7237. Looking ahead it is busy with the RBA SoMP, while offshore China has their trade balance and all eyes are on US Payrolls amid a wide consensus (from -0.6m to +3.2m).

First to the US stimulus package

No further progress was made overnight, though markets continue to be cautiously positive on an outcome given the proximity of the November elections. Democratic House Leader Pelosi reinforced this point for markets, stating “we will” have an agreement. Republic Senate Majority Leader McConnell also reinforced this point: “Exactly when that deal comes together I can’t tell you, but I think it will at some point in the near future”. Talks continue with leaders set to meet later today. President Trump meanwhile said he would act on measures if lawmakers cannot agree telling staff to work on an executive order covering a payroll tax cut, eviction protections, unemployment benefits and student loan repayments.

US data surprised to the upside. Initial Jobless Claims were 1.186m v 1.4m expected and previously. The fall in initial claims is the largest improvement in almost two months and acts as a counter to some of the other high frequency data that was suggestive of the recovery having stalled. It is likely that some of the improvement is due to layoffs associated the virus resurgence in the Southern parts of the US now starting to ease. Some are also speculating with the data being for the week to August 1, the expiration of the $600 a week unemployment benefit supplement at the end of July may also be a driver. Continuing claims which lag by a week also were better than expected, falling to 16.1m against 16.9 expected, though the fall in continuing claims is probably affecting by some states only requiring bi-weekly filing.

Putting aside the better than expected prints

Analysis of recent jobless claims still suggest a second wave of layoffs. Analysis of data in California notes 57% of people who filed a new claim for benefits during the week of July 25 were those who had lost their jobs or had their hours cut after having return to work (see CNBC for details).

Is a notion that lockdowns in the US may be less likely in the future. Dr Facui in Politico noted that the US can survive COVID-19 without another shutdown if risk mitigation strategies are followed: “I think we can get through this without having to revert back to a shutdown” if Americans uniformly wear masks, physically distance, avoid crowds and follow hand-hygiene recommendations (see Politico for details). The Fed’s Kaplan overnight also repeated this point “we don’t need to lockdown to manage this”, “I think people are now in a more widespread way wearing masks and more businesses are making it a requirement. People are just being more careful because of the resurgence”.

In FX the USD was little changed

GBP did temporally rise in the wake of the BoE meeting (high of 1.3186, now 1.3143), but mostly reversed the moves as Governor Bailey noted negative rates were still in the toolbox (“What I can tell you is that other analysts are essentially right, in the sense of saying it is in the toolbox. But, there is no plan at the moment to bring it out of the toolbox and put it to work”) and that the outlook was highly uncertain with risks skewed to the downside. Like many places around the world, GDP is not projected to be above pre-pandemic levels until the end of 2021.

There continues to be more talk around the reserve currency status of the USD and the impact that government debt and Fed asset purchases may have on that status. The Fed’s Kaplan noted: “We’re able to manage all this because we presume the dollar will always be the world’s reserve currency and we’ll be able to finance this”. “That may be true, and I’m hopeful about that. But I think it’s dangerous to rely so heavily on that presumption that that will continue indefinitely”. Continued talk over the USD’s reserve currency status will likely play to a weaker USD view.

With the AUD and NZD both up around 0.5%. The outperformance of the AUD came despite Australian Treasury estimates of the Victorian virus resurgence dragging up to $12bn or 2.5% points off Q3 GDP. Treasury also re-estimated the peak of the unemployment rate to be around 10% from 9.25% forecast in the July 23 economic statement. Around 250-400k people could be affected by the measures and the effective unemployment rate which takes into account those working zero hours and those leaving the labour force could rise from just over 11% to the high 13s. Due to the Victorian virus resurgence, JobKeeper eligibility has also been tweaked with businesses no longer having to show a fall in turnover in both the June and September quarters, from now on business will only need to show a fall in the September quarter compared to the same quarter in 2019 (see AFR for details).

Yields were little changed on net

Though did move a little intraday. US 10-year Treasury yields fell more than 4bps testing lows around 0.502 before bouncing back to be currently sit around 0.54down about 1.3bp on the day. 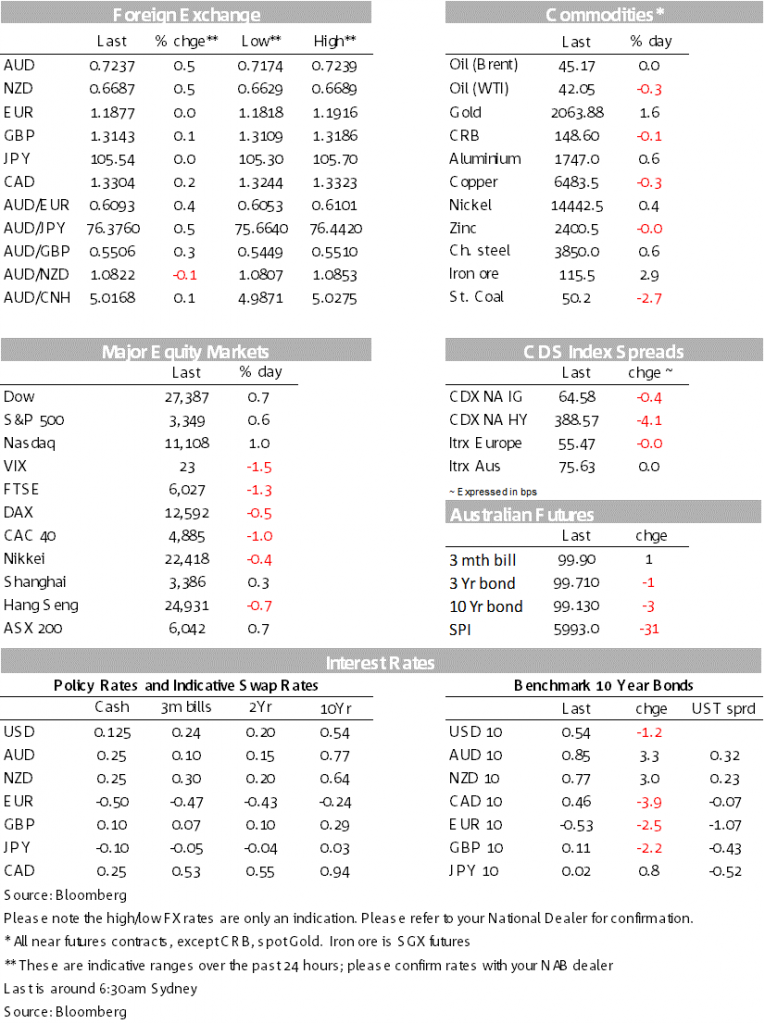