Overview: The winner takes it all

As currency markets open this morning, the AUD popped initially higher to a high of 0.6939 after the Coalition pulled off a remarkable victory, defying predictions from the polls and betting markets.  It’s very likely that the Coalition will either have an outright majority (76 seats needed of the 151 seat House) or in minority Government.  The ABC is projecting the Coalition at 75 seats, Labor at 65, six independents, and five yet to be decided.

It seems there were a mix of factors leading to the result: The Prime Minister ran a strong campaign, the Opposition Leader was not seen as the preferred PM, the electorate not liking the Opposition’s policies on changes to franking credits and capital gains tax, a big swing to the Coalition in Queensland where locals resenting interference over the proposed Adani coal mine, along with supportive preference deals.

There will also be a close eye on the stock market when it opens later this morning to see whether a positive response is evident there too.

After popping higher, the AUD has given back some of those initial gains ahead of the tantalising prospect of a speech on the economy and monetary policy from the RBA Governor Lowe tomorrow at lunchtime, with the market looking for confirmation of a firm monetary policy easing bias and the read through that June is “on”.  Trade war news is also present as a headwind.

NAB changed its rate call on Friday, now expecting that after last week’s soft readings on the labour market the RBA will cut rates in June, last week’s numbers pointing to a risk that labour market spare capacity will not reduce putting the RBA’s getting back to target inflation forecast at risk.  NAB expects another follow up cut in August.

Had it not been for the election, it would have been difficult for the AUD to resist the headwinds from trade wars and with Dr. Lowe’s speech looming and that might yet prove to be the line of least resistance for the AUD in the first part of the week.

On the trade war front, the mood music out of China late last week has been less than friendly, a WeChat blog run by the state-owned Economic Daily noting that “we can’t see the U.S. has any substantial sincerity in pushing forward the talks. Rather, it is expanding extreme pressure, adding that “If the U.S. ignores the will of the Chinese people, then it probably won’t get an effective response from the Chinese side”.  The blog reiterated tariff removal, achievable purchase plans and a balanced agreement text as China’s three main concerns.

Adding to the unsettling trade news, there were more unsettling developments on the US auto tariffs front on Friday.  Following a report that the US Commerce Department had found that auto imports are a threat to national security, President Trump agreed and has proclaimed a 180 day period for negotiations.

“Domestic conditions of competition must be improved by reducing imports,” the proclamation stated. Toyota responded forcefully, saying the proclamation “sends a message to Toyota that our investments are not welcomed, and the contributions from each of our employees across America are not valued.” Consumers will pay more and have fewer vehicle choices if import quotas are imposed, the automaker said.

Woking to sooth nerves with its neighbours, Trump announced Friday that the US is lifting steel and aluminium tariffs on Mexico and Canada, Canada responding in kind, opening the door for Congress to ratify the U.S.-Mexico-Canada Agreement.

Meanwhile, while last week’s US Retail Sales report was ordinary, the UoM Consumer Sentiment Survey for May jumped to its highest level since January 2004.  It’s a clear indication that the US consumer is doing just fine and should assuage concerns, especially given the still strong labour market and the rebound happening in the US housing market.

The Pound continues to eke lower. Writing in The Sunday Times, PM May said she will “not be simply asking MPs to think again” on the same deal that they have repeatedly rejected – but on “an improved packaged of measures that I believe can win new support”.

The PM said she wanted MPs to consider a “new and improved deal with fresh pairs of eyes – and to give it their support”.  A Cabinet meeting tomorrow is apparently to consider plans for a series of “indicative votes” by MPs to establish which proposals could command a majority.  Sounds familiar.

The plan at the moment is that the House will vote on a Withdrawal Amendment Bill in the week of 3 June.  More immediately, the European elections loom later this week (23 May) in which both the Tories and the Labour Party are expected to take a hammering. The polls point to voting for the Conservatives down to a paltry 9%, Labour not too much better at 15%.  Nigel Farage’s Brexit Party is polling at 35% and the Lib Dems at 16%.

UK Retail Sales loom at the end of the week, while BoE Governor Carney speaks tomorrow. 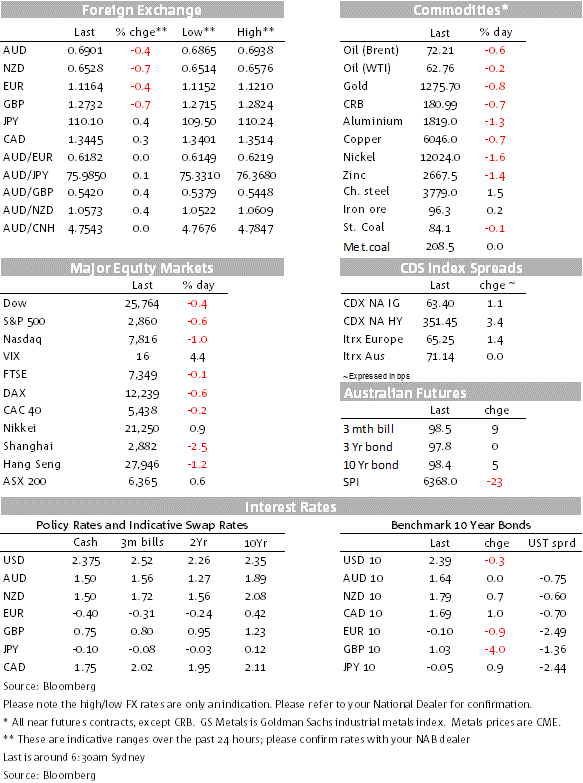