Markets Today: An optimistic ECB despite everything

The Euro rose today after the ECB spoke little of new measures to combat the economic downturn.

Major Central banks’ policy thinking remain as one of the key themes in markets while we await on Trump’s next tariff move. The ECB was the focus early in the session and although we did have forecast downgrades, Draghi failed to endorsed the current dovish market stance, EU share reversed early gains while the euro briefly popped above 1.13. Later in the session news that the US was considering a delay on Mexican tariffs boosted equities and lifted UST yields, notwithstanding US officials noting that the most likely outcome is still for  a 5% tariff to take effect next week. Fed Williams is losing  conviction on the “patience” mantra and the WSJ suggest June is a live Fed meeting.

The early part of the overnight session was all about the ECB. Ahead of the meeting EU shares were on the rise and the euro was relatively steady around 1.1220.  As expected ECB forecasts revealed a downgrade to growth and inflation forecasts for next year, the Bank also outlined details of its latest cheap long-term loans to banks that begin in September, but the numbers underwhelmed as the rates turned out to be less generous than those applied to the previous programme. ECB extended forward guidance on rates, pledging that it would keep its policy rates at their present levels “at least through to the first half of 2020” (previously through to the end of 2019, but this six months extension was the minimum investors were looking for). Then the killer punch came at the press conference with President Draghi disappointing market’s dovish policy pricing with a series “optimistic “ remarks. Draghi said that the ECB “didn’t see any substantial worsening in the outlook”, adding that “The data are not bad”, alongside repeating many of the more optimistic lines from prior ECB statements such as further employment gains, increasing wages and a growth outlook still only, “tilted to the downside”. Draghi then noted that financial conditions have become only “slightly tighter” and when asked about inflation expectations, which as measured by the 5-year/5-year, now sit at 1.28% and matching the EZ’s Brexit-led lifetime low, Draghi said, “Of course we are concerned but we see no signs of deflation. The ECB is not resigned to having a lower inflation rate forever.”

One line of thinking is that the ECB genuinely does not think “things are that bad”, another  is that the Bank is running out of rabbits to pull out of the hat, so best to keep that party trick when “things are really bad”. Given the major uncertainties surrounding President Trump’s trade war, there is also the argument for the Bank should wait a little bit longer. But with inflation and inflation expectations heading south, unemployment ex Germany and Netherlands not looking rosy and an ECB hierarchy likely entering a limbo state until October ( when the new President takes over), the risk is that once the ECB realises things are really bad, it will find itself well behind the curve.

In the meantime reaction to the ECB/Draghi saw the euro momentarily rise above 1.13 (now at 1.1275) . Germany’s 10-year rate rose as much as 4bps to minus 0.19% initially, but then reversed that move closing just 1bps above its record low rate of minus 0.24%. The disappointment was also evident in the equity market with the STX Europe 600 index closing at -0.02%, after being up by as much as 0.72% early in the session.

Moving on to the US and the latest on tariffs. Bloomberg reported overnight that the US is considering delaying Trump’s threatened tariffs on Mexico as talks continue, with Mexico pushing for more time – quoting one US official saying that the most likely outcome is still that a 5% tariff goes into effect but US negotiators recognise that Mexico is taking the talks seriously and working quickly to address Trump’s concerns. “If the 5% tariff is triggered but Mexico follows through on promises to crack down on migration, the duties could be short-lived”. On the US-China trade war, Trump said that he’ll make a decision on whether to impose tariffs on another $325m of Chinese imports after the G20 meeting at the end of the month.

The slightly better tone to the Mexico immigration negotiations has seen all US major equity indices end the day in positive territory, although there was a small pull back in the last half an hour of trading. After the close US vice president Pence poured cold water on poured cold water on the positive vibes confirming that at this point Mexico tariffs will be imposed Monday… “Upside down Boy, you turn me inside out….” Sorry I digress..Hard to tell how the US –Mexican stand-off will play out, but ignoring the good cop- bad cop US sketch, the commentary coming from Mexican official still plays to the view that a resolution will be found even if is not as early as next week.

UST 10y yields have ended the session at 2.117%, essentially unchanged on the day and reflecting the fact that we are none the wiser on Tariff man’s intention. Focus now turns to non-farm payrolls report were a soft number would play into the current aggressive Fed easing pricing that currently shows 64bps of easing by December.  The market expects reasonable employment growth of 180k after the strong gain in April, but the “whisper” number will be a lot lower after the shockingly low private sector ADP employment figure released Wednesday ( see more below).

Just on this topic, the WSJ run an article overnight suggesting the June FOMC meeting is live while speaking over night NY Fed President Williams joined the party of FOMC officials that have adopted an easing bias, giving a nod to current market pricing for rate cuts in suggesting that is was “important for us to keep an open mind….may need to keep rates same, may need to adjust them”. Meanwhile, earlier on the day Dallas Fed chief Robert Kaplan said “I think risks to the downside have increased but I think it’s too soon to make a judgment about whether any actions would be appropriate,” he said. “I want to give this a little more time and let” events unfold.

The USD is a little bit softer in index terms, largely reflecting a European currencies strength (DXY at 97.00, -.29%) while the AUD and NZD are little changed relative to yesterday’s levels. AUD now trades at 0.6977 and ZD is at 0.6622. Both traded in a narrow range overnight and today both antipodean currencies are likely to remain at the fortunes of external factors, namely US economic outlook and trade headlines.

Our headline models suggest two very contradictory reads. The model that includes ADP Employment (ADP Employment was just +27k in May and the weakest since 2010) points to +140k, while the model that excludes ADP wants +237k. The other factor that could weigh this month is the weather with the San Francisco Fed’s Weather Adjustment suggesting last month’s Payrolls were 60k too strong – and some payback may have occur this month. Accordingly we take the average of our models and trim this for some possible weather impact which gives us +160k, a little below the market consensus of +180k.

Assuming Payrolls print a solid 160k, the unemployment rate is likely to be unchanged at 3.6%. As for wages. our model points to downside risks due to the calendar effect of having the 12th of the month on a weekend. Our mapping suggests a 0.2% m/m and 3.1% y/y, which is one-tenth below the 0.3/3.2 consensus 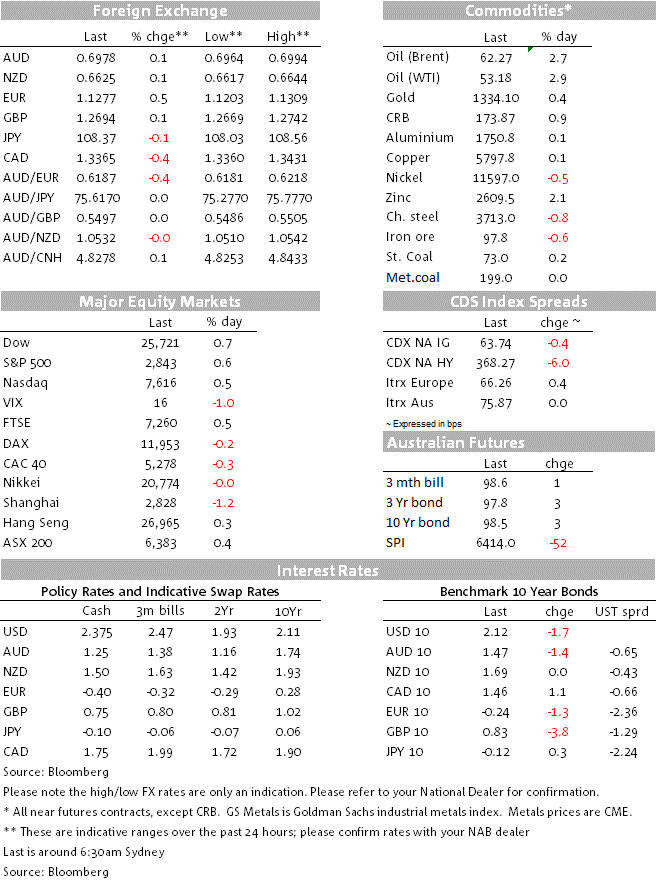