Markets Today: And another one

Markets have been lifted higher on further vaccine news, with Moderna saying their trials have shown 94.5 percent effectiveness.

Overview: Two is better than one

So maybe it’s true, that I can’t live without you,
Well maybe two is better than one – Boys like Girls and Taylor Swift

The positive start to the week during our APAC session yesterday got a shot in the arm overnight following news that Moderna’s Covid-19 vaccine recorded a 94.5% efficacy rate in preliminary numbers from a large late-stage clinical trial. European and US equity indices are showing positive returns for the day with cyclical and small caps leading the gains. Core global bonds yields are modestly higher, and the USD is broadly weaker. Commodity linked currencies are the G10 outperformers and the AUD begins the new day above 73c.

The Moderna news overnight is the second positive vaccine news following Pfizer/ BioNTech results last week. Arguably, however, Moderna’s preliminary results are even better and provide a massive boost to the fight against the pandemic. The effectiveness ratio exceeds the 90% reported by Pfizer/BioNtech, importantly too only five participants who received two doses of the vaccine became sick, compared with 90 coronavirus cases in participants who received a placebo. There were no severe cases among people who got the vaccine, compared with 11 in volunteers who received placebo shots. From a logistical perspective Moderna’s vaccine can be stored and shipped at normal freezer temperatures, unlike the Pfizer vaccine which needs to be kept at -75 degrees until five days before it is used.  Additionally, the Moderna’s vaccine can be kept at regular refrigerator temperatures for up to 30 days, making the logistics around its distribution and storage more straightforward.

Moderna also said that it expects an emergency authorization to be based on a final analysis containing 151 cases. Given the current pace of the trial the final analysis could be delivered by the end of this month. Similar to the Pfizer/BioNtech vaccine, once the final results are presented, then the US regulator requires 2 months of safety follow-up data before it can give the green light to the emergency authorization. These are all very encouraging news, meaning that by late January/early February we could have vaccines being distributed to those in most need. Like doctor Fauci said last week, the end of the COVID-19 pandemic is within sight, although the virus could remain endemic for many years.

Equity markets were already traveling with a spring in their step during our APAC session aided by weekend comments from two of President-elect Biden’s advisors noting they didn’t favour a full nationwide lockdown in the US. US equity futures and APAC equities opened the new week higher and then the moderna news lifted all boats although there was a clear preference for cyclical and small caps.

All that being said, some of the initial euphoria has eased somewhat with the S&P 500 initially showing gains close to 2% and now they are below 1%. A similar pattern is discernible in the bond market with the initial spike higher in yields reversing somewhat over the remainder of the overnight session. Prior to the news, 10y UST yields were trading at 0.87%, post the Moderna news the benchmark yield traded to a high of 0.9275% and now its looks to be settling just above 0.90%. Meanwhile 10y Bunds closed 0.4bps higher at -0.547% and 10y Gilts climbed 1.1bps to 0.3460%

Moving onto FX land, the USD is broadly weaker consistent with the greenback losing some of its safe haven appeal amid an improvement in risk sentiment. The BBDXY USD index is down 0.2%, taking it close to its recent 2½ year low and DXY is down 0.15% and trading at 0.9260%.

The Norwegian krone tops the currency leaderboard overnight, appreciating more than 1% on the back of a 3% increase in Brent crude oil prices. NZD is up 0.75% and is toying with the idea of a move above 69c, currently trading at 0.6893. The AUD is not far behind up 0.66% and now trading at 0.7312, with the RBA and RBNZ ultra easy policy well priced, both antipodean currencies are now likely to be driven by risk sentiment and the tussle between negative virus news and positive vaccines news.

On the virus news

The US surpassed 11 million coronavirus cases on Sunday as Florida reported the most new infections since July and new cases in California hit a three-month high. Deaths and hospitalizations are also rising. For now, markets at travelling with the hope that effective vaccines will prevent a severe downturn, hopefully healthcare services can cope with the increasing rate of hospitalisations before vaccines become widely available.

RBA Governor Lowe was speaking last night, you can see our report here, but the main theme was a reiteration of the Bank’s commitment to continue to provide support until we see a meaningful reduction in unemployment. “The challenge facing Australia over the next few years is much more likely to be the creation of jobs, rather than controlling inflation pressures,” Governor lowe said. Adding that the “gravitational pull” of easing by other central banks globally “has been very strong” and the RBA responded to this by also lowering its policy rate. “If our interest rates were higher than in the major countries there would be stronger inflows into Australian dollar assets and this would put upward pressure on our exchange rate,” he said. “In turn, this would make it harder to make the needed progress on jobs.” 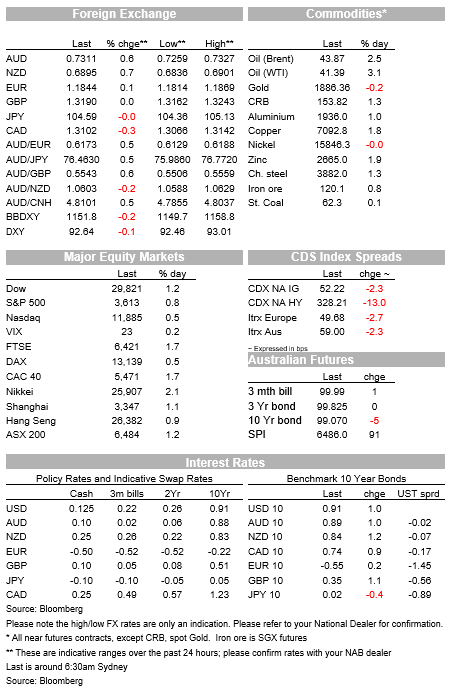