Markets Today: And back to the safe havens

Markets have switched back to risk-off mood.

Health authorities now see containment as “an unlikely outcome” and there have been more reports of community transmission in the US. Worldwide the number of cases is approaching 100,000 (97,426 cases) with 3,345 deaths.  A wedge has also opened up between governments with US health officials stating the mortality rate for COVID-19 was more likely between 0.1-1.0%, lower than what other health organisation have estimated (WHO 3.4%, note seasonal flu is 0.1%). Such differences in interpretation is likely to drive a less co-ordinated response to the virus. Expectations of substantial fiscal stimulus may also need to be pared with MNI reporting sources close to EZ finance ministers being sceptical that significant fiscal stimulus will occur despite recent pledges. Markets are likely to remain volatile as they continuously re-assess the probable economic impacts largely based on headlines.

Yields are back to fresh record lows with the US10yr yield briefly below 0.90% at 0.8976, and now -13.4bps to 0.92%. Pricing for Fed easing at the March meeting has extended with another 50bp rate cut now fully priced compared to yesterday’s 39bps. Equities have erased much of yesterday’s gains with the S&P500 -4.0% after Wednesday’s +4.2%. Stock declines are broad based. Headlines also suggest credit markets are starting to be affected with investors said to have pulled $12bn from one US corporate bond fund, though spreads are mostly contained.

Oil prices are also down sharply, with WTI -2% to $45.84. While OPEC met, delegates noted they would only agree to a 1.5m barrel a day cut if Russia also joined (note proposed 1.5m cut would come on top of existing 2.1m curbs agreed last year, though Russia has so far indicated it is only prepared to roll over the current cuts for three months). Also in commodities China’s CNPC has declared force majeure on all prompt LNG and pipeline natural gas imports after having delayed deliveries.

G10 FX has seen broad USD weakness (DXY -0.6% to 96.82) with the Fed still having the second most amount of ammunition of the G10 central banks and its carry advantages eroding as markets price further rate cuts. EUR is up 0.7% and GBP 0.8%. USD/YEN continues to show its preeminent safe haven status down -0.9% to 106.41 and coming closer to the 105 level that would start to worry the BoJ.

The AUD underperformed, down -0.2% and trading just below 0.66 at 0.6592. With policy rates so low in Australia and only one bullet left of conventional easing which markets expect to be used in April (90% priced for a 25bp cut), attention is turning to the probability of QE in Australia. RBA whisperers were in full flight yesterday with a series of articles citing the RBA’s preference to use Yield Curve Control (YCC) (see AFR, How the RBA would do quantitative easing).

YCC is seen as the RBA’s least-worst option given the difficulty central banks internationally have faced in trying to unwind bloated balance sheets. YCC would entail the RBA setting a target on part of the yield curve, with the RBA only buying government bonds when the market tested the RBA’s credibility in maintaining the target. The end result would likely be an even flatter yield curve which could lower longer-end borrowing rates and perhaps risk premiums by reinforcing the commitment to keep the cash rate low for an extended period. The move may also stem upward pressure on the AUD should the US Fed continue to aggressively cut rates and embark on further unconventional policy.

Of course the RBA’s most preferred option would be a significant fiscal stimulus package. To date the government has been reluctant with signs of only a measured stimulus package ahead in the “billions”. The latest hints in the press suggest such a package will focus on wage subsidies (proposal for businesses to be given assistance so they can pay the minimum wage to employees that have been stood down), as well as tax breaks to help with cash flow and a business investment allowance to stimulate investment (see AFR, Jobs subsidy plan to bust recession fears).

Data continues to take a back seat, being seen as dated

US Jobless Claims were as expected and remained low at 216k, while Factory Orders disappointed -0.5% m/m in Jan against -0.1% expected. The NFIB Small Business Survey’s labour market indexes released ahead of Payrolls later today also suggests the labour market remained solid in February, though most are expecting some deterioration to come as COVID-19 starts to impact the economy. Yesterday Australian January trade data beat expectations, though was mostly due to an unexpected fall in imports ($5.2bn surplus v $4.8bn expected).

Finally in US politics

Elizabeth Warren has formally dropped out of the Democratic nomination race though is yet to endorse a front runner. Betting markets have moved swiftly following Biden’s Super Tuesday performance with Biden now a 85% chance of getting the nomination with Sanders falling back to a 16% chance (note Sanders was at 57% only a week ago). Perhaps more importantly, the Congressional outcomes are now also swinging Democratic with a 35% chance of the Democrats getting both the House and Senate compared to a 22% chance just a few weeks ago.

Retail Sales domestically are likely to dominate, though given the data is for January it is unlikely to pick up much of the impact of COVID-19 which intensified only at the very end of January. Focus then shifts to US Payrolls and the OPEC+ meeting later today. 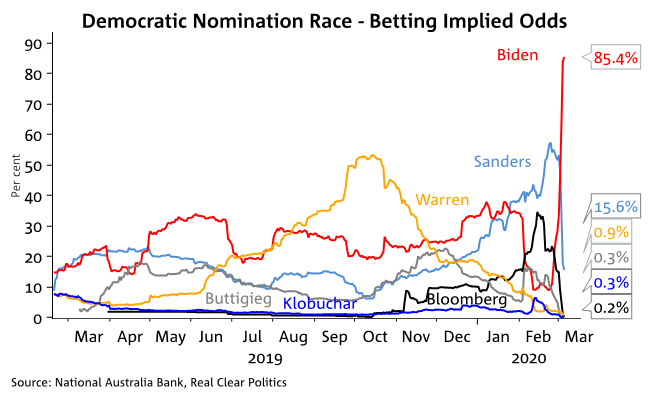 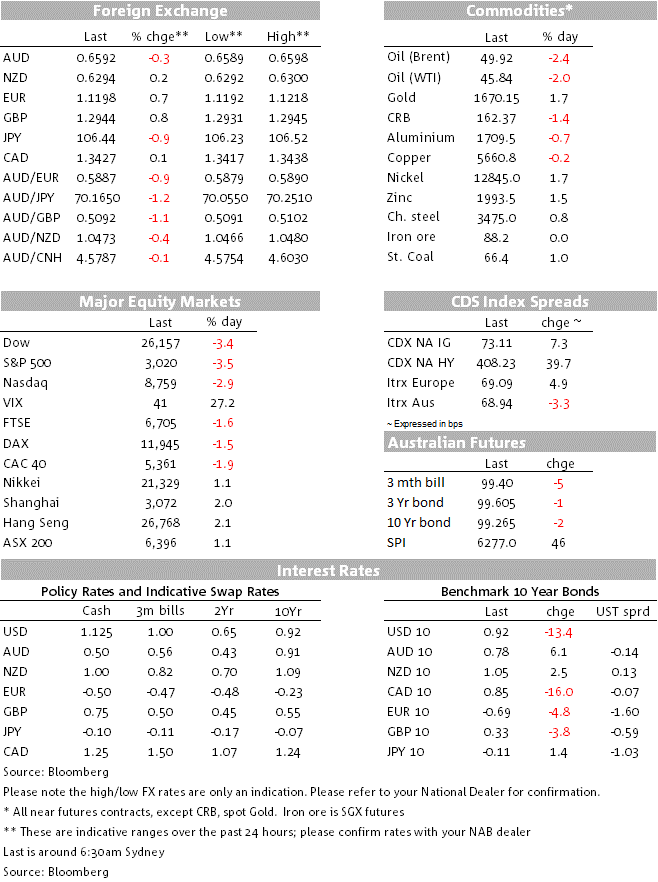 Momentum continued to build across Australian housing markets last month, as values rise at the fastest rate in seventeen years.