Markets Today: Another day of extremes

Big falls in equities and oil, as well as widespread selling of government bonds, even gold is being ditched.

“Would you rescue me? Would you get my back?; Would you take my call when I start to crack?”, Fontella Bass, 1965

It was another wild overnight session with sizeable moves across most asset classes. Equities are down sharply with the S&P500 -8.3% to 2329, around 32% below the Feb peak and mostly erasing all the gains seen under the Trump presidency. Bonds are also selling off with US 10yr yields +11.8bps to 1.20%, and more sizeable moves in Europe with UK Gilts yields +24.2bps, German Bunds +19.7bps and Italian BTPs +7.5bps (and at one stage were up an eye watering 64bps!). The bond sell-off is likely being driven by expectations of significant bond issuance as governments ramp up stimulus measures (Italy talked of allocating 20% of GDP to fight COVID-19; US has a 5% of GDP package being formulated; Canada announced a 3% of GDP package), as well as forced selling associated with losses incurred by some bond funds  (e.g. risk parity funds) and ETFs as well as redemption requests. The move in gold lends credence to the later with the safe-haven metal down -2.8% overnight. Oil also saw very sharp moves with WTI -19.4% as Saudi Arabia continues to direct Aramco to produce at a high level over coming months.

The USD squeeze continues amid the volatility with DXY +1.4% to 100.98. Safe havens outperformed, but importantly still fell and highlights the USD squeeze (USD/Yen +0.6%; USD/CHF +0.6%). Given such an environment, it is likely the Fed will extend USD swap lines to other central banks, and central banks themselves are/will likely intervene in an attempt to smooth out some of the volatility and will be worth watching closely today, particularly for the AUD (-3.4%), NZD (-3.4%) and GBP (-3.9%) which fell sharply overnight. The move in GBP was significant, with it temporality hitting the lowest level since 1985 and was down some 5% at one stage (low 1.1453).

In terms of the biggest mover overnight, it was NOK (USD/NOK +7.9%) driven by both the USD squeeze as well as the sharp fall in the oil price. Brent (-8.6%) and WTI (-16.6%) are down sharply, driven mostly by Saudi Arabia sticking to its increased supply targets (pledging to do this “over coming months”) at a time when global oil demand is falling. WTI is now the cheapest since Feb 2002 and many oil analysts are tipping a move below $20 being likely (currently $22.48).

AUD also moved sharply overnight, -3.4% to 0.5793 and now firmly below the 0.60 level. The AUD (and NZD) remain the global growth whipping boys, while Australia has generally lagged the policy response seen overseas – one illustration of that being AUD/NZD temporarily trading through parity overnight.

The RBA is expected to act, cutting rates by 25bps to 0.25% and taking the cash rate to the RBA’s effective lower bound. A QE package is also widely expected to be announced. Press briefings prior to today suggested the RBA’s preferred QE method was yield curve control, and the papers note the RBA would likely take the yield curve targets from where yields have recently been trading. A funding for lending scheme has also been mooted – modelled on the BoE’s recently unveiled measures. The Australian government is also expected to announce a 2nd stimulus package, while APRA could announce some capital relief for banks in terms of loans to ensure rollover of loans during the next six months where many businesses are likely to come under intense cash flow pressures.

Policymakers around the world are doing what they can, but it is unclear whether that is enough in economies that are likely to be in lockdown for an unknown number of months. Your scribe will be watching the experience of China and South Korea closely to see how successful the gradual lifting of containment measures will be, and whether they can avoid re-infection. If they can, then containment measures should also be able to be gradually lifted elsewhere following containment of the virus – the experience of China and South Korea is that it takes 15-30 days to achieve containment.

Both former Fed Chairs Bernanke and Yellen wrote  an op-ed in the FT recommending that the Fed should seek Congressional approval to buy corporate bonds directly, as the BoE and ECB already do.

Finally, in terms of bonds the move in Italy is worth highlighting. After rising more than 60bps initially, Italian bonds have outperformed significantly on the day amidst reports of significantly increased ECB purchases.  The 10-year Italy yield ended only 7bps higher on the day.  There are also reports that European policymakers are looking into whether a number of European governments (including Italy) should activate the European Stability Mechanism (ESM) fund.  This would then allow the ECB to make purchases through its OMT arrangement, allowing for potentially unlimited purchases.  Such a move would be politically contentious and represent an effective mutualisation of debt across the Euro zone, but the crisis appears to have opened the door for such a move.

All eyes on the RBA who are expected to cut rates and launce a QE program. The government is also expected to announce a second round of stimulus. Attention then turns to Germany and the US for the first possible impacts of COVID-19 on the economy through the German IFO for March and US Jobless Claims. 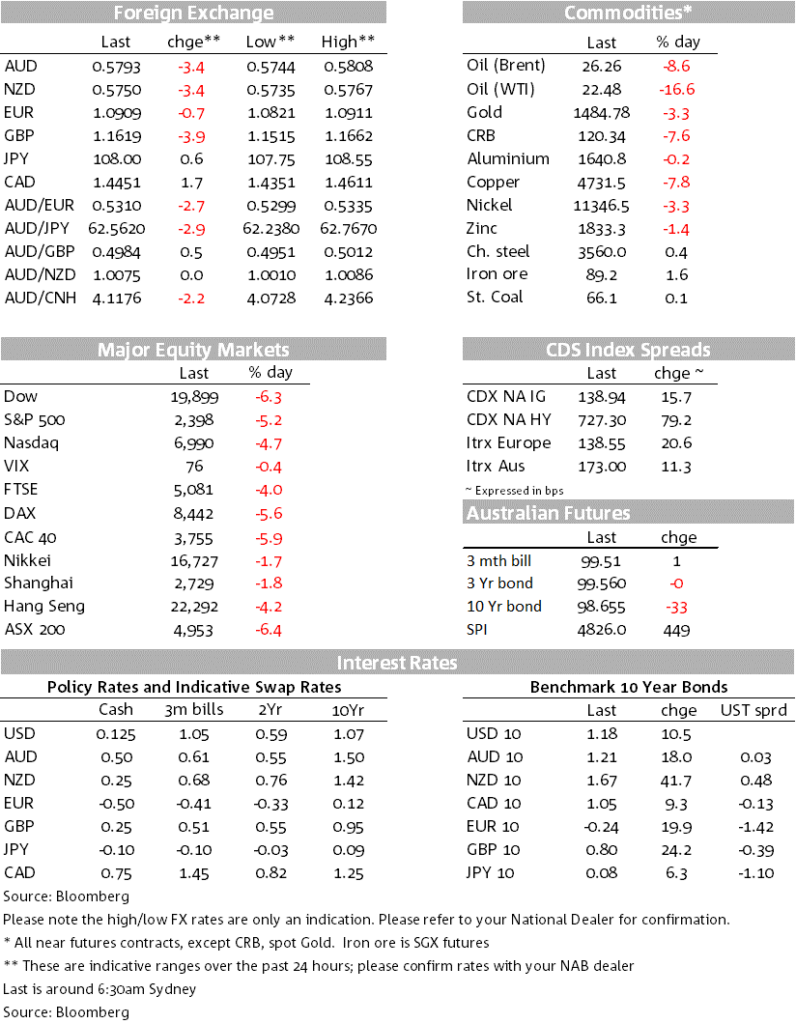