Markets Today: Are we set for a year of higher growth?

In our first podcast of 2020, Ray Attrill discusses the week’s economic news and the broader prospects for the year ahead.

Having posted record closing highs last Thursday once it became clear that military hostilities between US and Iran were over for the time being at least, US stocks eased back on Friday, the S&P and NASDAQ both by 0.3%, following a slightly underwhelming U.S. employment report. The S&P nevertheless ended the week with a gain of 0.94% and the NASDAQ an even more impressive 1.75%.

The ASX was actually the best performing developed world stock market both on Friday (+0.8%) and on the week (+2.9%). Friday’s much better than expected November retail sales figures (+0.9% – more below) was part of the story beyond Friday’s gains. It was also in part behind the improvement in the currency back to the 0.69 level as at Friday’s NY close, from an intra-week low (on Wednesday) of 0.6849. Post retail sales, market implied odds of the RBA cutting the Cash Rates to 0.5% on February 4 came down to about 43%, having been as high as 60% earlier in the week linked to concerns about the negative economic impact of the bushfires. Before Christmas, recall, the odds a rate cut were little more than one third.

Friday’s US data showed non-farm payrolls up by 145k in December, below the 160k expected, alongside which November was revised down to 256k from 266k and October to 152k from 156k. Employment in manufacturing fell by 12k with the trend here close to zero. Together with last week’s dire manufacturing ISM, it confirms that this sector – albeit only 12% of the economy – is still mired in rescission thanks in large part to the ongoing impact of US tariffs (and bear in mind here that even with the Phase 1 trade agreement, average tariffs rates on Chinese imports from the U.S, and on U.S. exports to China, will be higher than either 2018 or 2019. Furthermore, the influential U.S. National Bureau of Economic research (NBER) noted in a report last week that U.S. companies and consumers are paying almost the full cost of U.S. tariffs, and the impact of those duties on import volume magnifies over time. It said “the 2018 tariffs – many of which were applied in October – are only now having their full impact on U.S. import volumes”).

The U.S. unemployment rate held steady at 3.5% as expected, but average hourly earnings rose by just 0.1% not the 0.3% expected, to push annual growth down to 2.9% from 3.1% in November. Often in the past, a soft earnings number such as this has been followed by a bigger than average jump the following month (or has been revised up) so no-one was rushing to conclude on Friday than underlying hourly earnings growth was necessarily moderating. Following the numbers, and also Friday’s wholesale inventory numbers, the Atlanta Fed kept its Q4 GDPNow estimate unchanged from January 10 at 2.3%.

A somewhat noisy picture yet again from latest Canadian labour market data, with employment up a stronger than expected 35.2k (25.0k expected and after the 712k plunge in November).  The unemployment rate fell back to 5.6% from 5.9% and 5.8% expected, but hourly wages growth has come in to 3.8% from 4.4% previously and 4.2% expected. Last week, Bank of Canada Governor Stephen Poloz remarked that he would be looking at labour market data closely to see if recent softening was part of a trend. Overall, there wasn’t enough in Friday’s data to conclude that it is. That said, AUD/CAD did build on the post-Australian retail sales data gains to end Friday back above 0.90 for the first time in over a week.

Geopolitical developments since Friday include Iran admitting that its military shot down the Ukraine Airlines 737, which has further inflamed domestic protests against the Tehran government. France, Britain and Germany have just issued a statement saying they remain committed to the 2015 nuclear deal with Iran and urge it to reverse all measures inconsistent with the deal and return to full compliance (last week, recall, one response from Iran to the U.S. killing of General Soleimani was to say they would henceforth exceed the previously agreed uranium enrichment cap). In Saturday’s Taiwan elections, President Tsai Ing-wen has secured a second term after sweeping to victory in an election dominated by the island’s relationship with China.  Ms Tsai secured just over 57% of the ballot – a record 8.2m votes – well ahead of her rival Han Kuo-yu. The BBC notes 8 million votes is an extraordinary tally for a Taiwanese President seeking a second term, saying the record-breaking win has delivered a landslide mandate to Ms Tsai, and a major snub to Beijing.

The gains for the AUD far exceeded those for other currencies, most of which still managed gains against the USD (DXY lost 0.1%) with the NZD the second best performing currency (+0.23% vs. 0.63% for AUD/USD). Friday’s CFTC/IMM positioning data shows the net speculative short position in NZD now virtually eliminated, in to just -1.5k from more than 40k last October. Net speculative AUD positions have come in to -27k from -47k in mid-November 2019.

Commodity markets on Friday saw oil lose more ground, Brent down 40 cents to back below $65 on a closing basis for the first time since December 12. Base metals were all higher (LMEX +0.2%) while iron ore was flat. Gold gained $10 to $1562.

As for Friday’s retail sales

A reminder these rose by a strong 0.9% in November, beating both the market consensus (0.4%) and NAB’s forecast (0.6%) and marking the largest increase since November 2017.  The strong result was driven by clothing, department store and household goods sales, with the Bureau of Statistics noting a sizable boost to sales from Black Friday sales.

With the November result driven by marketing promotions, we remain concerned about the trend in consumer spending given weak October sales (up 0.1%) and the contraction in retail volumes in Q3 despite $7b of personal income tax cuts.  In our view, the promotions mean that much of the strength in today’s numbers likely reflects consumers bringing forward the timing of pre-Christmas purchases rather than spending more.  December figures will also show whether spending volumes rebounded in Q4 and we will get a better sense of this with NAB’s cashless retail sales index.

If markets are going to burst back to life  this week, its unlikely to be because of the unfolding economic calendar which is light and mostly second tier, save that China’s December activity readings and Q4 GDP are on Friday. The US highlights are retail sales and CPI

The US and China are currently scheduled to sign the Phase 1 trade deal on Wednesday in Washington (Chinese VP Liu He is in town Mon-Wed), though Trump on Friday suggested it could be shortly thereafter.

The US quarterly earnings season commences this week (with JP Morgan, Citigroup and Wells Fargo all on Tuesday, BofAML and Goldman on Wednesday). 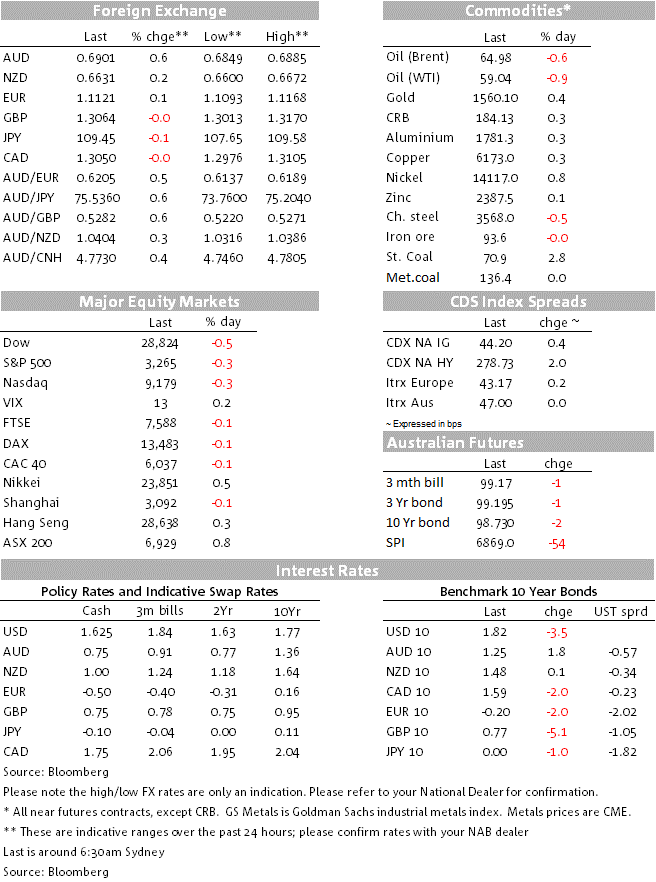 Markets Today: The rise and rise of the Aussie dollar

Markets Today: The recession we only just had to have

Australia has entered a recession but, as Josh Frydenberg was quick to point out yesterday, the Q1 fall in GDP was miniscule compared to most of the rest of the world.