The Australian and NZ dollars reached two-year highs in the overnight session.

Equities have faltered on the last day of August

A small blip on what has been a solid month for investors. Lack of news suggest month end flows probably the main factor at play. Fed Clarida keeps the hope of Yield Curve Control alive, possibly maybe in the future, but not now. USD remains on the back foot, notwithstanding equity pullback. AUD briefly trades above 74c.

With regional indices down around the globe, barring Japan’s Nikkei, which got a nice lift ( up 1.12%) from one of the goats (Greatest Of All Time, Warren Buffet on new Berkshire Hathaway bought stakes in five major trading companies ) and the NASDAQ, which ended up 0.68%.  Month end rebalancing flows have probably played  a role in the lacklustre end to August for what has been a very decent month for equity investors. Microsoft (-1.48%) and  Walmart (-1.03%) have been among the notable underperformers as the market reassesses their ability for the companies to jointly buy TikTok. Speculation is ripe with CNBC reporting a deal could be announced tomorrow while many investors believe there is a 50% chance TikTok will have to shut down its US operations.

Although the last day of August has been a disappointment for many equity investors, looking at the month’s performance, August was a very kind month for investors. The NASDAQ gained a cool 10%, the S&P 500 wasn’t too bad either, up 7.57% while the Shanghai Composite gained a relatively modest 2.59% followed by our  S&P/ASX200 at 2.24%. 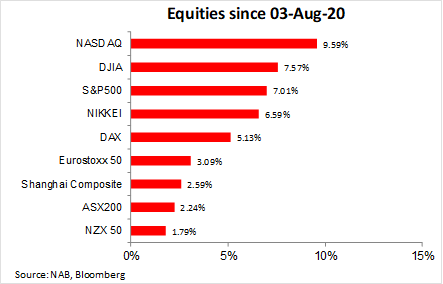 In a night devoid of any major news

Fed vice-Chair Clarida speech was the highlight. The Vice Chair reiterated the Fed’s new monetary policy framework outlined by Chair Powell last week, regarding the new “average” 2% inflation target and one-sided employment objective. Of note, however, Clarida also said that yield curve control (yield caps) “were not warranted in the current environment but should remain an option that the committee could reassess in the future if circumstances changed markedly,”.

Clarida added that the FOMC might offer “refinements” to the Summary of Economic Projections (SEP) in light of the changes to the framework, with a decision of any potential changes by the end of the year. The SEP is currently published quarterly, providing the FOMC members’ economic and rates projections. Furthermore, he didn’t want to pre-judge any decision regarding potential changes in the Fed’s rates guidance or balance sheet communication.

The USD has remained on the backfoot losing ground across the board with JPY the one exception in G10. Commodity linked currencies have been the past 24 hours  outperformers with NOK up 1.42% and CAD up 0.48%, both up on a quiet night for oil prices ( WTI -0.41%), suggesting month end flows have probably been the biggest influence.

Similarly, the NZD also recorded a new year to date high of 0.6763, but now trades at 0.6733, essentially unchanged from levels this time yesterday. EUR met resistance at the same level seen mid-August, at 1.1966 and is currently up 0.3% at 1.1940. JPY has been the softest of the majors, with USD/JPY up 0.4% to 105.85, reversing some of the move seen late last week which occurred after reports of PM Abe stepping down for health reasons.

The Fed ultra-dovish stance with higher tolerance for elevated inflation is the overriding force in FX markets, the USD has ended August broadly weaker, with JPY the only G10 pair little changed. 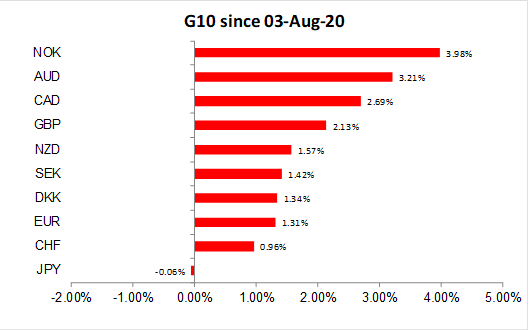 Moves in core global bond yields have also been subdued

The big theme in August has been the steepening of curves with the Fed increased tolerance for inflation playing a big role ( see chart below). On this score is worth noting how the US 10-year break-even inflation rates made a fresh high, up 1.5bps to 1.79%, seeing real yields fall another 3bps. 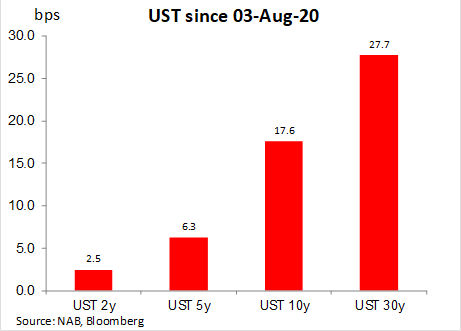 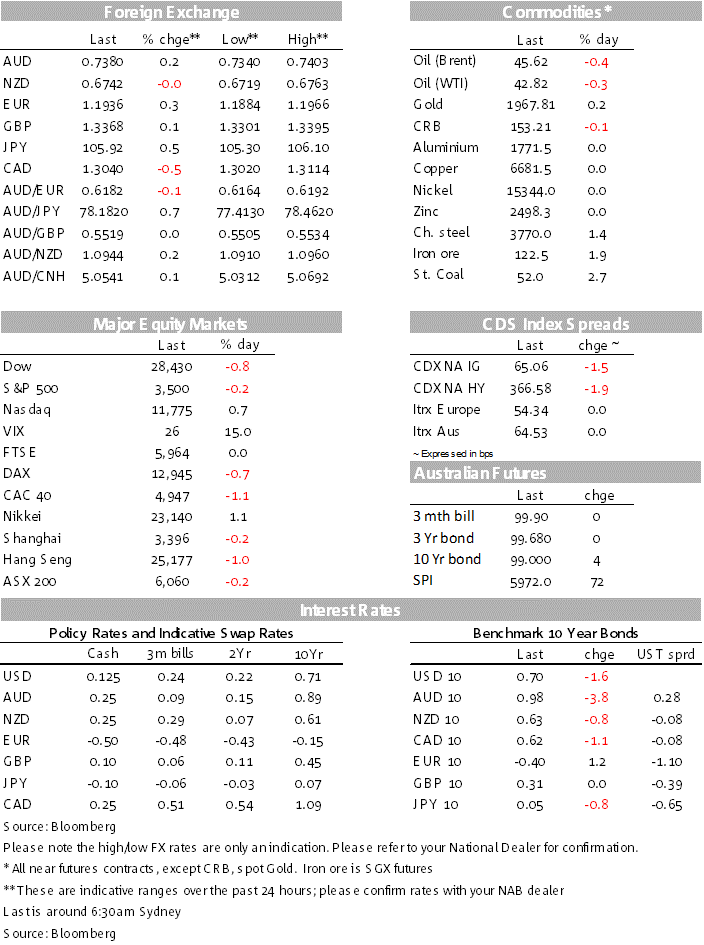