Not a particularly original song title today, but it is by American rock band Tesla, whose namesake in the commercial world has seen its share price down a cool 10% overnight, after ‘battery day’ and the vaunted announcement of a ‘million miles battery’ project proved to be a complete fizzer. Tesla CEO Elon Musk says it could take three years to fully realise large reductions in battery costs and did no more than announce a cheaper version of his electric cars. While this has led the NASDAQ lower, US stock market falls are much more broad-based (e.g. the smaller-cap Russell 2000 is down 3%, the same as the NASDAQ and more than the S&P, which closed down 2.4%). In currency land, the latest bout of risk aversion shows up in extension of the APAC-day falls in both AUD and NZD, down 1.4% and 1.3% respectively as I type and far and away the worse performing currencies on a day when our preferred BBDXY USD index has risen by a lesser 0.7%.

Rather than there being a particular catalyst for the renewed decline in US equities – not evident in Europe, incidentally, where all the main bourse ended in the green – we could cite numerous ongoing background influences. These include: rising US covid-19 infection rates (but so too in the UK and other large European countries); no evidence of progress on a fiscal support bill to replace the CARES Act; and, the mere proximity to the 3 November US elections, meaning we are now well inside the window when historically, if US equities do take some fright based on uncertainty or the prospect of political change, this is when it tends to happen (i.e. only within two months of election date).

On the latter two points, the apparent White House fixation with getting a nominee to replace Ruth Ginsburg on the Supreme Court is seen to be both a distraction from more pressing (economic) issue of shoring up the economy with a new support package, and also potentially a factor that could have some influence on the election. This is especially if Amy Barrett – a mid-western catholic conservative – is the chosen nominee, insofar as she has the potential to draw some support away from Joe Biden in mid-west states where he currently has his nose in front. This can but add to the uncertainty factor weighing on stocks. We’ll find our more on Saturday when President Trump names his pick.

As noted, Wednesday’s US equity sell-off is very broad based, and in terms of S&P sectors (all ending in the red) while IT is one of the worse performing (-3.2%) the more economically sensitive materials and energy sub-indices straddle the IT sector drop, down 2.9% and 4.6% respectively.

Bond markets remain largely inert, with changes in yields of no more than 2bps across the US and Europe at 10-years (US currently up 0.5bps to 0.676%).

Currencies remain much livelier, with moves largely mirroring the fresh deterioration in (US) risk sentiment. Thus the two most risk-sensitive G10 currencies, AUD and NZD, are down 1.4% and 1.3% respectively to 0.7070 and 0.6548. Heightened anticipation of further RBA easing as early as the October 6 next RBA Board meeting (to coincide with the Commonwealth budget) weighed on AUD during our local session yesterday, but the catch up played by the NZD (after the RBNZ was ‘steady as she goes yesterday) is testament to risk-sentiment being the primary driver of latest moves lower in the Aussie.  In this respect, noted journalist Terry McCrann was out overnight saying there was no good reason for the RBA to be making any cuts, but this failed to move the dial on the AUD back higher.

Earlier in our evening the EUR showed no response to incoming ‘flash’ PMI data where manufacturing readings were good (i.e. better than last month, Germany especially at 56.2 from 52.2 and 52.5 expected) but service sector readings dropping back below 50 and much worse than expected (pan-Eurozone 47.6 from 50.5  and 50.2 expected). GBP in contrast got a little bit of love from its PMIs where manufacturing came in a little better than expected (54.3 vs 54.0 expected though still down on 55.2 last time) while services fell to 55.1 from 58.8, a bit worse than the 55.9 consensus forecast). US Markit PMIs for both services and manufacturing were fairly flat, services 54.6 from 55.0 and manufacturing 53.5 from 53.1.

Various Fed speakers overnight for the most part continue to suggest a sobering outlook for the US economy and call for more fiscal support (one dissenter from this view yesterday morning was James Bullard, who though the recovery could continue into Q4 without out). Vice Chair Clarida reiterated the lower-for-longer rates outlook, saying that any lift-off in rates “is several years off”, as the Fed aims for above-2% inflation. 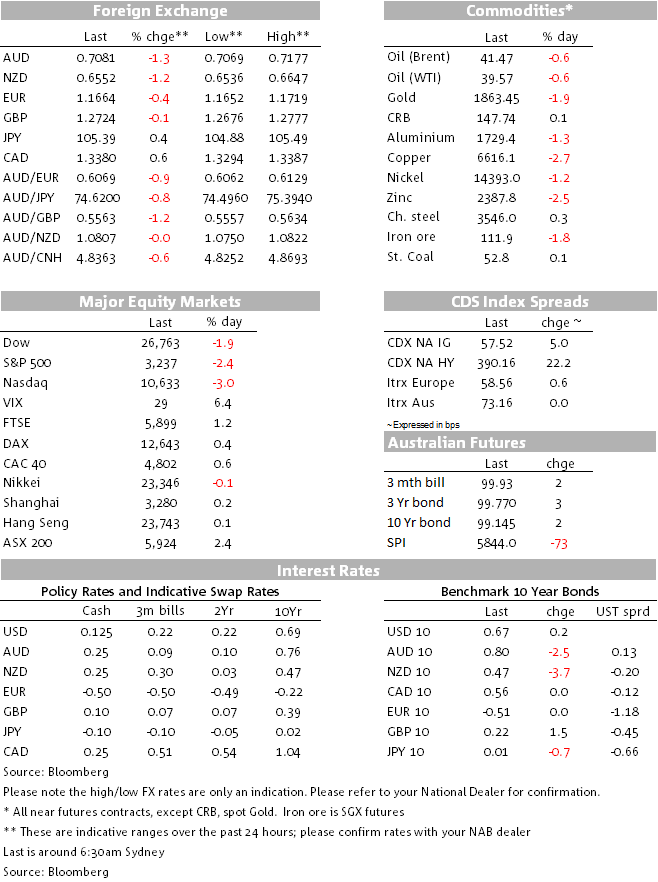