All eyes tonight will be on the US non-farm payrolls data.

Overview: Dancing in the Dark

A quiet night for markets with Payrolls looming large tonight. On trade there has been little in new developments with President Trump keeping markets dancing in the dark, stating talks are “moving along well”, but “we’ll have to see” regarding the December 15 tariffs. The USD remains under pressure, down -0.2% to 97.43, its fifth consecutive daily decline with much of that being driven by strength in GBP (+0.5% to 1.3158) as polls and betting markets point to a Tory majority – betting odds now point to a 70% chance.

Bucking the trend was the AUD (-0.3% to 0.6831) with yesterday’s weak retail sales print weighing, while the AUD/NZD cross moves further south (-0.5% to 1.0432) with the NZD boosted by a less scary RBNZ bank capital review and implying less need for compensatory rate cuts. Yield moves were also largely limited with US 10yr yields +2.4bps to 1.80%; kiwi rates the exception yesterday after the bank capital review with 10yr yields +8.4bps to 1.48%. Equities are little changed with the S&P500 +0.1%, ditto oil with the latest OPEC deal merely formalising existing production levels.

First to trade talks. There has been little in the way of new developments. President Trump has kept up his constructive ambiguity, while the WSJ reports that China is still insisting on tariff rollbacks and that “over the past few days…officials in the U.S. have become less optimistic about a deal” with the size of potential agricultural purchases a sticking point. The US is looking for China to increase agricultural purchases by $40-50bn within two years, from its current $8.6bn and would be twice as much China bought from the US prior to the trade war (see WSJ article for details).

Data was sparse with US Jobless Claims better than expected at 203k against 215k, along with the Trade Balance at -47.2bn against -48.5bn expected. There was little out of Europe apart from German Factory Orders (-0.4 against +0.4% expected), suggestive of a still subdued manufacturing sector.

WTI is  +0.1% to $58.49 and near 2½ month highs following OPEC agreeing to deepen their existing output target cut by 500k barrels a day. In reality though it merely formalises existing production levels with producers already producing below the official target for some time. The deal will have to be ratified by OPEC+ which is meeting today.

The NZD (+0.2%) continues to grow wings with yesterday’s RBNZ Bank Capital requirement being a more moderate outcome and reducing the need for compensatory rate cuts. At the headline level the large ‘Big 4’ banks will need to hold a minimum 16% tier 1 capital, up from the current regulatory minimum 8.5%. The more moderate outcome came as the implementation period was extended to 7 years from 5 years and that less-costly redeemable preference shares could count towards banks’ minimum capital requirements (up to 2.5%). The end result is that the RBNZ now estimates the effect of the increased capital requirement is that it could raise average lending rates by 20bps rather than the 30bps estimated at the original proposal. The more moderate outcome was reflected in the average share price of the major Australian banks which rose by 1.5% on average following the news.

In contrast, the AUD came under pressure (-0.3% to 0.6832) from a weaker than expected Retail Sales print. Retail Sales for October were unchanged compared to expectations of a +0.3% m/m increase. The flat outcome comes despite recent interest rate cuts and tax cuts and plays to the view of the RBA needing to ease policy further. The RBA is currently in assessment mode, where the November minutes it noted “further evidence on spending by households was required before drawing a conclusion on the effects of the tax cuts and low interest rates”. In our view, the data have been clear and more stimulus is needed. As such, NAB expects the RBA will cut the cash rate to 0.5% at its next meeting, in February when it confronts its forecasts and again in June to 0.25%.

With AUD coming under pressure the NZD growing wings, the AUD/NZD cross fell -0.5% to 1.0432. Relativities between the two economies are changing given rising milk prices in NZD, and lower commodity prices for Australia, which suggests the cross could grind lower in the near term.

Notions of fiscal stimulus are also starting to rise in markets over recent months (including in NZ).  In Japan, PM Abe yesterday announced a major fiscal stimulus, worth ¥13.2t ($121b, or close to 2% of GDP spread over 15 months).  The markets didn’t seem particularly impressed however, although most of the details had been leaked to the media earlier in the week, with JGB yields barely moved and little change in the JPY.

Finally, in the US speaker Pelosi announced that she has asked key chairmen to draft articles of impeachment against President Trump, meaning a vote is likely by the end of this year. However, conviction in the Senate is very unlikely given it requires a 2/3rds majority and Senate republicans are still lining up behind the president.

A quiet day domestically with only the second-tier AiG Constriction index scheduled. Internationally US Payrolls loom large where markets expect a bounce back, though some doubt has crept in following the weak ADP number earlier in the week. To frame the start of the week next week Chinese Trade data is due on Sunday. 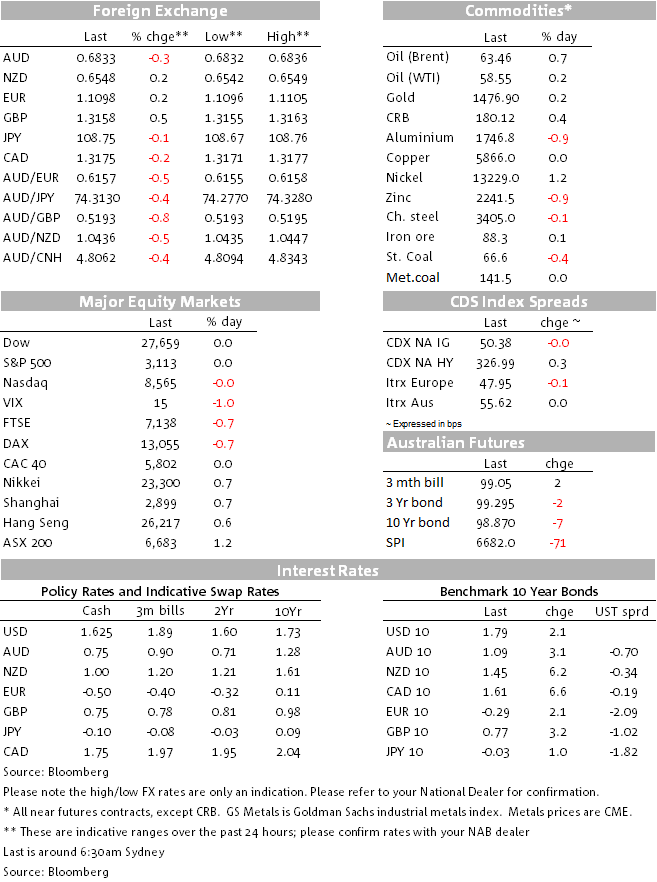