The Fed has announced no moves on rates in the US, with no expectations for cuts in 2020.

Rock steady, baby, That’s what I feel now, Just call the song exactly what it is –  Aretha Franklin

Ahead of the FOMC

Equity and bond markets were relatively subdued while the AUD and NZD outperformed amid a mild risk on tone in the air. A rock steady FOMC, leaves the Funds rate unchanged while a solid majority of dots suggest no change through 2020. The statement removes reference to `uncertainties’ around outlook, but Powell highlights concerns over subdued inflation. US equities like a rock steady Fed, UST yields retain early declines and the USD loses ground post the FOMC.

Movements in currencies were a little bit more interesting with the AUD leading the charge, up 0.81% to 0.6885. SEK was +0.69% and followed by the NZD +0.37% to 0.6571 and CAD +0.34% to 1.3185. Other than the mild positive close in European equities and no major data surprises (US core CPI figures were in line with market expectations, remaining at a non-threatening level that won’t change any monetary policy expectations), it is hard to suggest any other driver for the AUD and NZD outperformance, commodities were mixed with copper (0.90%) and iron ore (+0.76%) higher while oil prices were around 1% lower. So it seems a bit of positioning ahead of the FOMC played a part with a mild risk positive tone also evident in EM currencies ( ZAR +0.57%, MXN +0.60% and BRL +0.49%).

The FOMC left the Fed Funds rate unchanged while the dots plot suggest a vast majority (13 out of 17) of members expect the policy rate to remain unchanged in 2020. Most members see higher rates as likely in 2021, with a further increase expected in 2022. There was little change in forecasts for economic growth, unemployment and inflation.

While the language about uncertainties about the outlook was removed, this was replaced by The Committee will continue to monitor the implications of incoming information for the economic outlook, “Including global developments and muted inflation pressures”.

US equities have reacted positively to the unchanged FOMC decision and Powell’s comments and as we are about to press the send button,  the S&P500 is 0.33%, NASDAQ is a +0.47%.

UST yields had drifted lower ahead of the FOMC decision and now the move has accelerated in the past few minutes as Fed Chair Powell talks down the prospects of higher rates depicted in the 2021 and 2022 dots, noting that significant, persistent inflation rise is needed in order to hike. 10y UST yields now trade at 1.784% (3bps lower relative to pre FOMC levels) while the 2y yield is at 1.609%, about 2 bps lower relative to pre FOMC levels.

The gain for the NZD following the government’s fiscal announcement was small and short-lived and once the details were digested the NZD was weaker into the APAC close. Some commentators took the view that while the headline “stimulus” looked good, in practice it will take a long time to filter through the economy.  We don’t necessarily agree with that sentiment. The government announced plans for $12b of new capital expenditure, with two-thirds of that assigned to “shovel ready” projects. Further spending announcements will be made in the May Budget. The projected underlying operating balance flicks around the zero mark (as a % of GDP) over the next few years, while the cash deficit widens to 2.4% of GDP.  Treasury’s fiscal impulse has been revised up by 1.5% of GDP over the next 2 years.  So the RBNZ will be taking this new information into account in its next forecasts.  The extra fiscal stimulus plays to the view that the RBNZ easing cycle is over, with the baton handed over from monetary to fiscal policy.

GBP was weaker yesterday morning after the highly respected YouGov MRP poll showed a likely closer election result that implied by the previous poll – the implied Conservatives majority sliced down to 28 seats from the previous poll of 68 seats. Given the margin of error of the poll, YouGov suggested that a hung Parliament couldn’t be ruled out. After falling to 1.3110, GBP is back up to 1.3208, essentially where it was prior to the YouGov poll release.

EUR has finally broken through resistance just under the 1.11 mark and now trades at 1.1140 meanwhile the USD/JPY is down  about 20 pips to ¥108.52, reflecting its strong links to movements in UST yields. 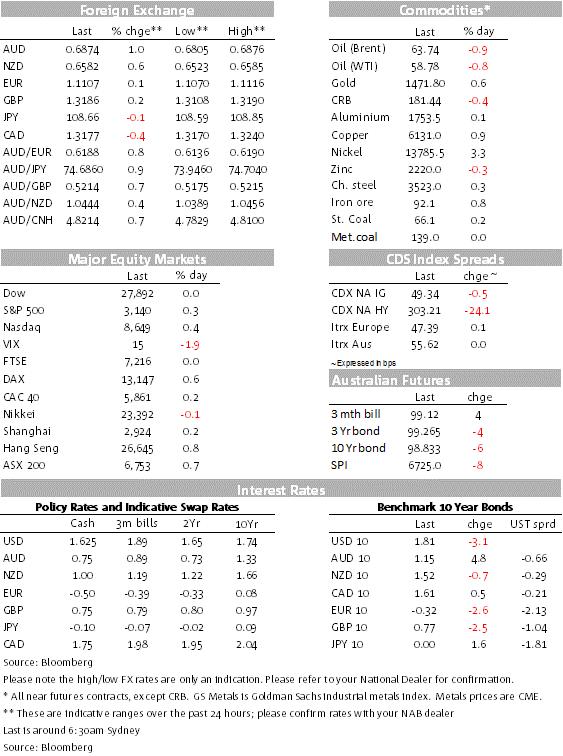