Markets Today: Back to work but not for everyone

Markets continue to be jittery, with news of reopenings offset by concern over rising infection rates.

Risk sentiment was on the back foot during our time zone yesterday albeit only mildly so and this trend developed further during most of the offshore session. Concerns over the spread of COVID-19 in some US states in particular where hospitalisation rates are rising, and also following the recent outbreak in Beijing, continuing to cast something of a pall over markets. Worse than expected weekly US jobless claims didn’t help either. Yet the notorious last ‘hour of power’ in the US stock market kicked in on cue and has seen the S&P end just in the green (+0.06%) and the NASDAQ up by a third of a percent. The USD is about 0.5% firmer, with GBP weakness post the Bank of England policy announcement the biggest contributor to the gains. AUD and NZD are both about 0.5% weaker on this time yesterday.

The Bank of England kept rates unchanged as expected last night at 0.1% and decided by 8:1 to increase QE by GBP100bn to GBP745bn – also as expected. Some analysts had thought the BoE might increase QE by GBP150-200bn (following the recent pattern of central banks elsewhere, most notably the ECB, choosing to exceed consensus market expectations). The BoE reckons the extra GBP100bn will last to the end of the year – some had thought they would pre-announce an extension well into 2021 – and BoE Chief Economist Andy Haldane argued for no increase. In its policy Minutes the MPC noted that the drop in Q2 GDP might be less severe than it had previously thought and which appears to be why the chief economist dissented. The curiosity is why GBP fell by more than 1% after an initial knee jerk move higher?  The answer appears to be that ultra-aggressive monetary policy easing that is seen to give your economy the best chance of weathering the COVID-19 relate economic storm is to be rewarded with currency strength, not weakness. That’s not how we see the Fed’s ultra-aggressive easing versus all other major central banks ultimately playing out vis-à-vis the USD, but on the day it’s evidently how FX market chose to trade the BoE, GBP/USD ending the New York day 1% lower and the weakest G10 currency.

The ECB meanwhile announced demand of its latest cheap loan scheme (TLTRO) amounted to EUR1.31tn, with demand from 742 banks. The consensus had been for between EUR1.2tn and 1.5tn.The latest round of TLTRO allows banks to borrow at rates as low as -1% (subject to fulfilling certain conditions) every three months. The result needs to be netted against around EUR760bn of expiring older TLTROs, early repayment of prior TLTROs and bridging loans, suggesting around EUR550bn of fresh demand (and ECB balance sheet expansion) and as such goes some way to suggesting TLTROs remain part of the ECB’s arsenal, alongside the PEPP and PSPP (QE programs) and the EU’s planned joint loan initiative. Bank stocks climbed after the announcement (which given their weight in Eurozone stock indices is important in terms of potential EUR-boosting foreign portfolio capital inflows). EUR/USD is nevertheless a third of a percent weaker on the day, largely in the context of  a firmer USD.

US initial jobless claims continued to trend lower but at 1.5m were more than 200k worse than expected, while continuing claims held above 20m (20.5m) against expectations for a fall to just below. These are not good omens ahead of the expiration on unemployment benefits. The better news was from the Philly Fed survey, jumping to 27.5 from -43.1 and versus -21.4 expected but being a diffusion index tells us little in quantum terms about how much better things were than in May.

Have been fairly subdued – 10-year Treasuries down as much as 5bp to 0.69% for much of the US session before yields rose alongside improving stocks in late day trade to end the New York day at 0.71%. earlier, European bonds were mostly 1-4bps lower, the exception being UK gilts where 10s rose 3.5bps post the BoE, again reflecting evident disappointment they weren’t more aggressive.

Yesterday’s local labour market data were in most respects worse than expected.  Employment fell a further 228k, far worse than market expectations for a 79k fall. This means that over the past two months, 835,000 people have lost their job. Unemployment rose to 7.1% (7.0% expected) with the rise tempered by more people leaving the workforce, where the participation rate has fallen to 62.9%, its lowest level since 2001. The ABS notes that if all the 835k who had lost work in the past two months had actively sought work the unemployment rate would be 11.3% by now.  On the less negative side, hours worked are down 10% since March, which if they troughed in May is a much better outcome than the -20% the RBA was initially talking about, and the -15% they and Treasury have been talking about more recently.

AUD was initially hit quite hard by the data (falling from 0.6880 to 0.6840) but losses were subsequently pared by the improvement in risk sentiment, linked mostly to positive China news, including a 20bps cut to the PBoC’s 14-day reverse Repo rate to 2.35% and comments from PBoC Yi Gang that it seeks a rise in total credit growth this year of at least 30 trillion yuan (some 17% up on 2019).  We’ ve also had monetary policy easing from two other large Emerging Market countries on Thursday, Indonesia by 25bps to 4.25% and Brazil by 75bps to 2.25% with a hint of more to come. These were both as expected, but the fact they were able to proceed is further evidence of the lack of pressure on EM in general at present, in turn eliminating – for now at least – one big source of potential downside risk for the AUD.

Locally, we get preliminary May retail sales, expect to be positive as social distancing rules started to be relaxed, following the 17.7% April drop and 8.5% (panic buying) March rise. The easing of restrictions should see discretionary retail rebound, particularly for clothing, eating out and department store sales, even as hospitality remains limited by social distancing measures. A surge in activity at the end of the month for these categories should see retail sales rise by around 5.5% (no market consensus)  even as spending on food, household goods and other retailing pulls back a little from current strong levels.

A video EU Summit to discuss the proposed Rescue and Recovery Fund (RRF) will  take place this evening. The mood music out of this will be important for risk sentiment and all things EUR one side or other of the weekend. According to an MNI report earlier this week, EU President Charles Michel has pitched the summit discussion on the RRF as an ‘orientation debate’, ruling out any agreement this week. “There will be no decisions, no real debate even, but the idea is that it will be a stepping stone to a future debate.” MNI reports Michel saying.

The MNI report says that divisions are opening up between EU states over the proposed RRF with Germany arguing that the European Commission’s EUR750 billion plan should be scaled back in line with an earlier EUR500 billion Franco-German proposal (citing ‘sources familiar with governments’ lobbying’)   It also notes that the insistence by southern European countries that they should be the main recipients of aid is running into opposition not only from the so-called Frugal Four — grouping the Netherlands, Austria, Sweden and Denmark — but also from Eastern European countries (some of whom stand to be particularly disadvantaged by failure to agree an EU-UK trade deal by the end of this year and are looking for financial help from the RRF in this event).

We get UK May retail sales and public finances (sales expected +4.1% m/m ex-autos after -15.2% in April), EU April and US Q1 Current Account data and Canadian retail sales. 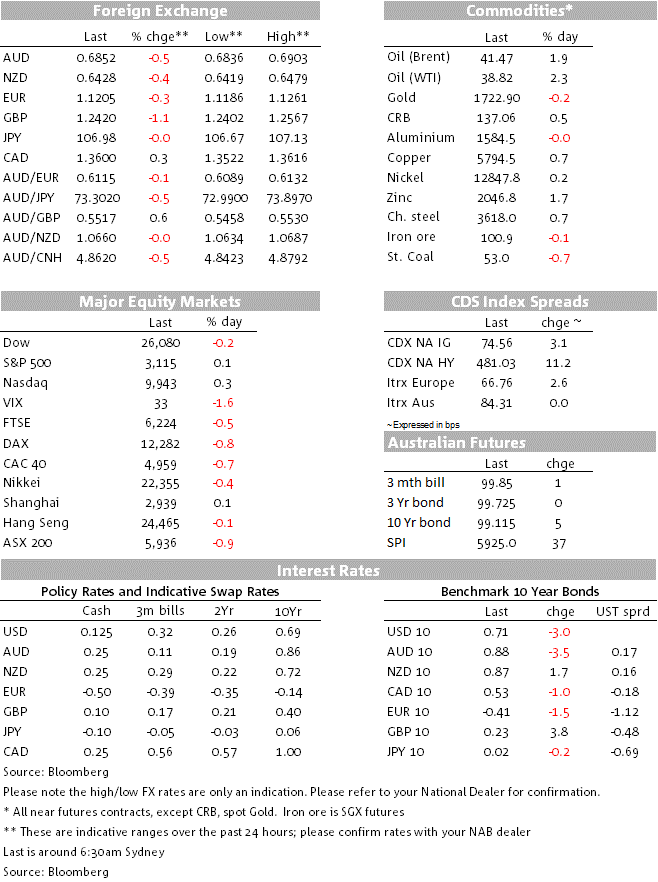