The quarter has started with big falls again on equity markets and lower Treasury yields, whilst oil prices continue to be driven downwards.

We all wished good riddance to Q1 2020, but Q2 has got off to a poor start with regards to risk sentiment, European and US stock indices all down +/- 4%, the US dollar back in the ascendency and government bonds finding fresh support in the face of ever larger estimates of forthcoming supply and heavy foreign central bank selling. ‘Better than expected’ US economic data continues to be summarily ignored.

Most of us – though not NAB’s intrepid economist Tapas Strickland – were surprised by significantly stronger than expected China PMI data, both official and Caixin version, but which could be explained by the fact that any business restarting in March would have been a ‘plus’ for these diffusion indices, even if they produced just one widget versus none in February. Last night it was the turn of the US manufacturing ISM to surprise to the upside, falling only to 49.1 from 50.1 and versus the consensus for 44.5. Here, it was the jump in supplier delivery times that supported the headline. In normal times this is a sign of demand outstripping the ability to supply, but these are not normal times and the March increase reflected supply chain disruptions due to COVID-19. The main sub-indices of the ISM report, covering orders and employment, both fell quite sharply. Production also fell. It’s doubtful Friday’s non-manufacturing reading will hold up so well in headline terms given it’s the services sector that has suffered most of the sudden stop to activity and doesn’t have the same quirks of supplier delivery times to distort the index.

The March ADP Employment survey was also not nearly as bad as expected at -27k against -150k expected, but this is virtually impossible to square with last week’s surge in jobless claims and where tonight’s number could be even worse (see Coming Up below).  We also saw the Eurozone unemployment rate tick down to 7.3% from 7.4% in January, which surely takes the prize for most irrelevant piece of economic news of the last 24 hours.

There’s little doubt that COVID-19 related news has been responsible for the poor start to the quarter, including a now much more sombre President Trump warning of as many as 240,000 US deaths just in the coming few weeks and claims by US intelligence that China has concealed the true extent of the epidemic inside China. Propaganda perhaps, though I read one particularly grim report last weekend of the number of urns delivered into Hubei Provence, which far exceeded the reported death toll.  Reports of officials re-imposing social distancing measures in Hubei (after some citizens retuned to the cinemas, for example) are also troubling vis-à-vis thoughts about how long current social distancing restrictions might be in place in the rest of the world, and what happens when they are relaxed.

If there’s good news to be had

The rate of new infections in many large countries, as well as in New York, looks to be slowing further. Also worth noting is the unexpected rise in both exports and imports in South Korea in March reported yesterday, an indication perhaps that their ‘go early go hard’ COVID-19 containment efforts were particularly successful and that their manufacturing sector at least has as a result suffered only short term damage.

The question for equity and other risk markets thus remains, namely whether the extent and duration of the unfolding economic slump is yet adequately priced, notwithstanding the extent of (unprecedented) monetary and fiscal measures being hurled together and rapidly deployed. The NYSE has just closed with the S&P 500, Dow and NASDAQ each down 4.4%. Earlier the Eurostoxx 50 finished 3.8% down and the German Dax -3.9%.

We see 10-year US Treasuries down 6bps to 0.61%. Earlier European bond markets closed mixed (UK gilts -1.5bps, German Bunds +1.6bps and Italian BTPs -0.2bps, all at 10-years). Support for Treasuries thus remains, notwithstanding the extent of forthcoming supply – much of which will of course be bought back from the street by the Fed – and latest US Fed Custody holdings that show a $57bn fall in holdings of Treasuries by foreign central banks last week (after -$31bn the week before).  Some of this doubtless reflects OPEC nations raising cash to shore up domestic budgets in the face of the oil price collapse. But bear in mind the Fed is currently buying bonds at a rate of $75bn per DAY.

As for oil overnight

Brent is back below $25 (-5% to $24.95). President Trump reportedly spoke to Saudi and Russian leaders in an attempt to bring about a truce in the oil supply war. Russia said that it wasn’t planning to boost crude production now, but in a tweet Saudi’s Aramco boasted about its record production. In any case, traders are focused on the global demand destruction, as highlighted by data showing US crude inventories soaring by 13.8m barrels last week. Brent crude is down over 5% to sub-$25 levels while WTI is back down probing the $20 mark. In other commodities LMEX base metals index is off 2.5% (still slightly above its 23 March low).

USD and JPY are both back in the ascendency, the DXY index currently up 0.5% on the night led by a 0.7% fall in EUR/USD, JPY +0.4% and AUD, CAD and SEK down by 0.9%, 1.1% and 1.3% respectively. We did see spikes up in both Wednesday’s 4pm London fix, to 0.6185 and 0.5978 respectively and where demand looks to have caught a short interbank market napping. Both pairs came straight back down post the Fix. Liquidity in FX remains an issue, as illustrated in the Chart of the Day below which shows that average bid-offer spread on $5 million quotes across the major currency pairs, judging from NAB data, were as of last week 3-4 times what they were through February.

The only really relevant piece of economic data on today’s calendar is weekly US jobless claims (covering the week to Saturday Match 28).  Another horrific number is assured with the consensus stab in the dark sitting at 3.5 million, up on 3.283mn. the week before but with market estimates ranging as high as 6.5 million.

Among the largely irrelevant data points are Australian February job vacancies and in the US February trade (deficit seen down to $40bn from $45.3bn on weaker imports) and February Factory Goods Orders.

Chart of the day 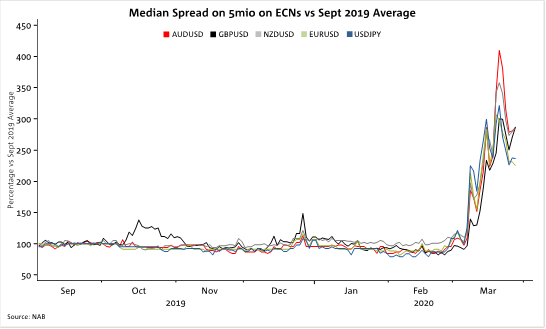 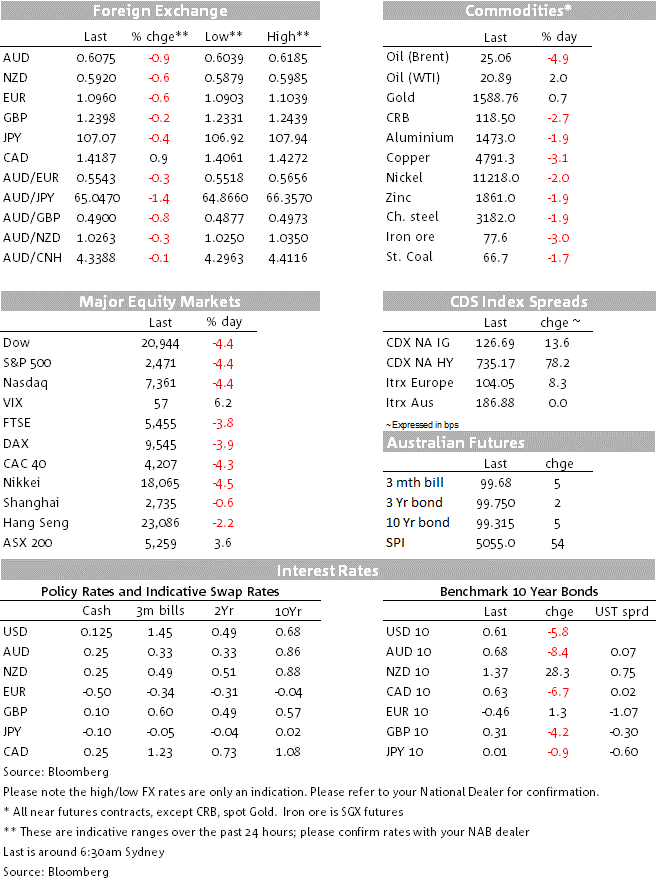