Friday saw a reversal in the bond sell-offs earlier in the week, seeing 10 year yields in the US falling back top 1.4%.

I am a little divided, Do I stay or run away
And leave it all behind? It’s times like these you learn to live again – Foo Fighters

While the bond sell-off took a breather on Friday, it was still a volatile day for markets. Longer dated UST yields led the decline in core global yields with month end activity supporting the bid. Equity markets were lower again with the NASDAQ the exception, managing to end the day with modest gains, although it still ended as one of the big underperformer on the week. The VIX traded to an intraday high just above 30 with the increase in risk aversion helping the USD perform across the board. Commodities were not able to escape the broad sense of uneasiness with copper and metals leading the decline. Unsurprisingly then, in times like these with high levels of risk aversion and lower commodity prices, the AUD was the big underperformer on the day and starts the new week just above 77c, after briefly trading above 80c on Thursday.

The bond market had a bit of breather on Friday with a bull flattening theme seen across core markets. Month end rebalancing activity which favoured selling of equities and buying bonds was thought to be one factor for the interest in longer dated sovereign bonds.

After trading to a high of 1.6085% early during our Friday, 10y UST yields range traded during our day, but then later in the US session a rallied ensued helping the benchmark yield decline from 1.51% to end the week at 1.4049%. The 30y Bond ended at 2.151%, 12.3bps lower on the day while the 5y tenor which has been the focus of the reflation trade decline 9bps to 0.73%. Looking at the weekly chart, even after the decline in yields on Friday, the 5y part of the curve was the one that hurt the most, ending 15bps higher relative to levels a week ago.

That said, the bond moves on Friday still feel like a pause for air, rather than the catalyst for a move towards calmer waters. Market participants remains nervous over the prospect of higher inflation as economies look to reopen aided by vaccine roll outs, high levels of savings along with solid fiscal and monetary support.

Data releases on Friday didn’t elicit much of a reaction by markets, but of note US Personal income jumped 10.0% in January, above the consensus, 9.5%, the core PCE deflator rose 0.3%, well above the consensus, 0.1% and the saving rate jumped to 20.5% from 13.4%, leaving it at roughly three times the pre-Covid average.

The rise in the US savings number comes as a result of the December fiscal stimulus and the virus-enforced reductions in spending on discretionary services. Over the weekend, the US House passed the huge $1.9 trillion (~9%/GDP) fiscal stimulus bill, the American Rescue Plan would pay for vaccines and medical supplies plus financial aid to households, small businesses and state and local governments. The legislation would provide $1,400 direct payments to taxpayers making as much as $75,000. The US administration is hoping the Senate will pass the stimulus bill by mid-March, when enhanced unemployment benefits are set to expire, a few concessions look likely with the minimum wage unlikely to part of the package.

Bond market volatility has not been limited to the US market. Indeed, AU Bond futures not only were the big underperformers on Friday, they were also the big movers during the week, up an eye watering 47.5 bps in yield terms over the past five days, ending the week at 1.72% ( 98.28 in price), after trading to a high of 1.91% early on Friday.

After declining on Friday, core European bond yields also ended higher on the week. The volatility in the bond market prompted ECB Stournaras to say call on the Bank to accelerate the purchases within the Pandemic Emergency Purchase Programme (PEPP). Meanwhile, ECB Schnabel, who is responsible for market operations, said on Friday that a rise in real long-term rates may withdraw vital policy support too early, and that “policy will then have to step up its level of support.”.

Central Banks resolve is certainly being tested at the movement and the market will be very attuned the any comments from the RBA at its policy meeting tomorrow as well Fed Chair Powell’s appearance at the WSJ Jobs Summit on Thursday.

10y AU Bond Futures the big movers on the week

The volatility in the bond market also reverberated in equity markets with the VIX index briefly trading above 30 on Friday , before ending the week at just below 28. After posting big declines on Thursday, tech shares staged a bit of a recovery on Friday with the NASDAQ the only major equity index managing to record gains for the day. The S&P 500 eased by 0.48% while early in the day the Nikkei fell 3.99% and in Europe the Stoxx Europe 600 Index fell 1.6, posting its worst week in a month.

The NASDAQ was one of the big underperformers over the past week, down 4.92%. China’s Shanghai Composite fell by more, down just over 5% while the CSI 300 index fell over 7%.

A bad week for equities

Amid risk aversion across the board, the USD was Friday’s undisputed performer within the FX market, gaining 0.7%-0.8% in index terms. A stronger USD also weighed in the commodity space with Copper (-4.0%) and metals leading the declines while oil prices fell between 3% and 1%.

Elevated risk aversion and lower commodity prices was an unwelcome combo for the AUD, after briefly trading above 80C Thursday evening, the AUD fell over 2% on Friday now begins the new week at 0.7709. The sharp AUD decline on Friday was not pretty from a technical perspective, the pair ended the week close to it weekly low of 0.7693 and in the process, it also tested the uptrend line from last March lows evident in the weekly chart. The RBA will be a big focus this week, but if market volatility remains elevated, it will be difficult for the AUD to make its way back above 80c.

The EUR fell back from above 1.22 on Friday morning to close the week at around 1.2070.  Safe haven currencies outperformed, with the JPY and CHF only down around 0.4% on Friday.  The GBP (-0.6%) also performed reasonably well, helped by some hawkish comments from BoE Chief Economist Haldane.  Haldane warned that central banks may be too complacent on inflation and there was, in his view, “a tangible risk inflation proves more difficult to tame” and monetary policy may need to be tightened more aggressively than markets are pricing.

China’s official PMIs were released on Sunday and the figures were softer than what the market had expected. The Manufacturing index fell to a nine-month low of 50.6 from 51.3 in January, lower than the 51 expected by consensus. The non-manufacturing gauge, which reflects activity in the construction and services sectors, declined to 51.4, versus a median estimate of 52. Overall, the Lunar New Year holidays and social restrictions hindered activity by more than expected, but the surge in activity over the past week still suggest a rebound in PMI readings should be expected over coming months.

USD the winner on Friday and the week 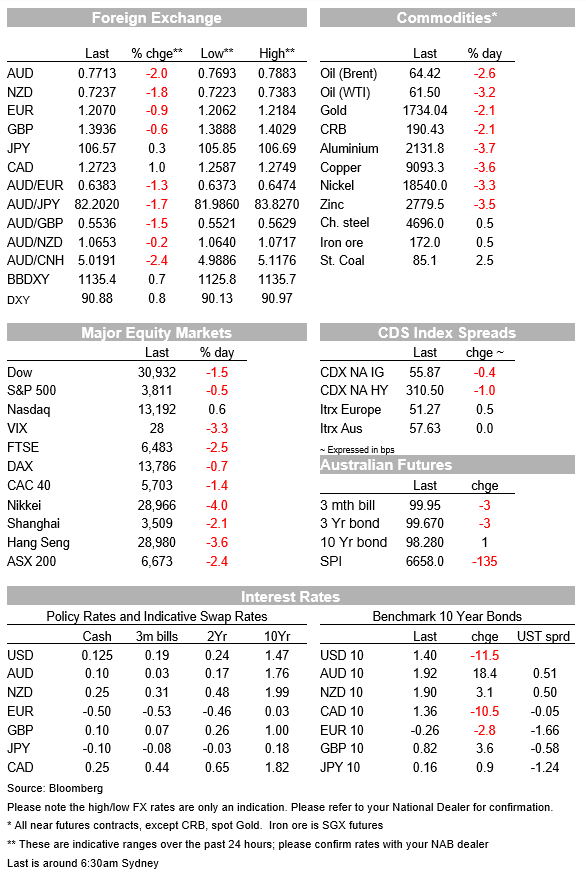