The market reaction has not been favourable to the latest Brexit events.

Oh, you know we’ve got to find a way, To bring some understanding here today…

With a light economic calendar on offer, Brexit events always looked like the ones likely to dominate the price action overnight. The UK parliament was scheduled to take two votes on the Withdrawal Agreement Bill (WAB), the first one on whether they agree on the “principles” of the WAB ( which passed as expected) and the second on the timetable to enact the Brexit legislation, which failed. Markets were essentially marking time ahead of the vote, European equities closed marginally higher (prior to the Brexit votes) and US equities gave up earlier gains post the timetable vote. A much better than expected Richmond Manufacturing print lifted  UST yields, but the Brexit saga pulled them back later in the session. There was little FX movement prior to UK votes and unsurprisingly cable is the big G10 FX loser post while JPY is the only USD outperformer.

PM Johnson kicked of the UK parliamentary session overnight calling on MP’s to “get Brexit done and move our country on”, but then like in a good poker game, Bojo also said that if Parliament rejected the WAB  enactment timetable and the EU confirmed a delay to the 31st of October deadline he would pull the bill and seek an election instead.

The House of Commons voted 322 to 308 against the PM’s proposed fast-track timetable for the WAB after the Government had enjoyed a small victory with a favourable vote on the “principles” of the WAB. The government’s timetable  defeat means that it is now virtually impossible for the UK to pass all the required laws in order to agree an EU exit plan by the 31st of October deadline.

After losing the vote

The PM remained defiant saying the government will now step up preparations for a no-deal Brexit on October 31 and confirmed his draft Brexit law will now be paused.

Bojo now has made two threats, but in reality a hard Brexit on October 31st is unlikely given that the UK has already requested an extension if the WAB was not approved on time by parliament and EU Council President Tusk is on record saying the bloc will never choose to push Britain out with no deal, indeed as we are about to press the send button Tusk has said that he will recommend the EU accepts the UK’s request for a Brexit extension.

As for the general election threat

It seems that it now depends on what sort of extension the EU grants. Technically the UK’s request is for the 31st of Jan 2020, but according to media reports the UK government is now willing to accept a ten day Brexit delay to the October 31st deadline. Worth noting too that if Bojo called an election, he needs parliament support and there is no guarantee he could get the votes.

Ahead of the Brexit votes

Markets were essentially marking time, but reaction to the vote news now sees the pound as the big underperformer, down 0.69% relative to levels this time yesterday. But at 1.2899, is probably fair to say the market remains relatively upbeat on GBP fortunes. GBP was 7 big figures lower at the start of the month and so reaction to events over the past few hours suggest this is only a minor setback. For one the probability of a hard Brexit have diminished considerably over the past few weeks and overnight events do not change that. Importantly too, today’s first vote means parliament agreed on the “principles” of the WAB, this is the first time any divorce accord has won the backing of the House of Commons.

A swift Brexit deal now looks off the table

If the government is able to agree a short extension from Europe, the WAB remains alive. Focus will then turn on possible bill amendments. For instance, one amendment has been proposed that would force the government to seek an extension of the transition period from December 2020 to December 2022 to give more time to reach a trade deal with the EU. Other amendments that could be introduced include whether to keep the UK in a customs union with the EU and whether a second referendum will be called.

We can probably say that downside GBP risk still look limited given a hard Brexit looks unlikely, but on the upside further GBP gains may take a bit longer play out. There are still plenty of potentially Brexit twist ahead.

Looking at AUD and NZD

Both antipodean currencies have essentially watched events from the sidelines. Post the Brexit vote both pairs lost a bit of ground, but relative to yesterday’s levels NZD is unchanged at 0.6410 and AUD is -0.2% at 0.6859. For now though the good vibes on the US-China front and also on the Brexit front ( no hard Brexit likely) have helped the AUD and NZD performed against what has been a broadly softer USD. Technically both antipodean currencies have room to move higher with the AUD 200 moving average at around 0.6970 a key technical resistance while the 0.6450 mark is the near term challenge for the NZD.

The US data from the Richmond Fed index was a big surprise jumping to +8 from -9 against expectations for -7 print. Gains in orders and shipment (up 7 and 10 points respectively) drove the rise in the headline number while the employment component was unchanged. 10y UST yields moved up to an overnight high of 1.7993% post the data release, but reaction to Brexit news now sees the benchmark yield at 1.7660%, 3bps lower on the day.

In Canada’s Federal election, PM Trudeau won a second term, but fell 15 seats short of a majority and will need the support of minor parties to pass legislation. This will take the government towards an even more left-leaning direction, which will support demands for added fiscal stimulus. The Bank of Canada survey of business opinion showed a slight improvement in sentiment. Retail sales for August were below expectations, but cannabis sales were up a hefty 19%, which might explain the election result. 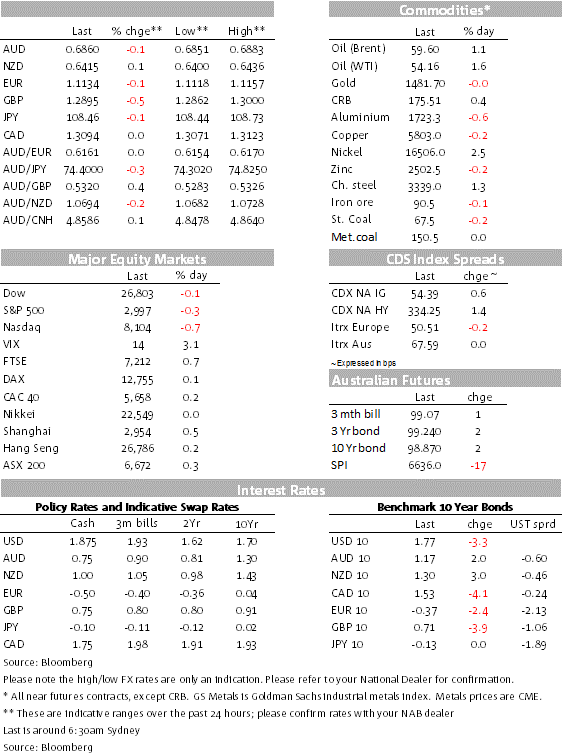