A drop in the pound was the only significant market move overnight.

Overview: together in electric dreams

“However far it seems (love never ends); We’ll always be together; Together in electric dreams; Because the friendship that you gave; Has taught me to be brave”, Philip Oakey and Giorgio Moroder 1984.

Monday was supposed to be a quiet day for markets given the US Labor Day Public Holiday. It mostly was except for GBP where UK PM Johnson threatened to walk away from UK-EU trade talks if no agreement is reached before October 15 (if we can’t agree by then “I do not see that there will be a free trade agreement between us, and we should accept that and move on”).

Reports also emerged on the w/e that the UK was preparing to contradict the Northern Ireland Protocol (a key part of the Withdrawal Agreement) in its Internal Markets Bill. Cable dropped on the news with GBP down -0.8% to 1.3168 and is the weakest in G10 FX in what was a mostly quiet night of mild USD strength (DXY +0.3%).

The key question for markets is whether the remarks are still mostly brinkmanship as negotiations near the finish line; the mild market reaction suggests markets think so and still sniff a deal. Other FX moves were moderate with EUR -0.2%, AUD -0.1% and NZD underperforming -0.4%. European bonds were also little moved with German 10 year yields +0.9bps and UK 10 year yields -1.5bps.

Risk sentiment was mostly positive with European equities up

The Eurostoxx 50 rose +1.6%, while US S&P500 futures are up +0.5%. Amongst European stocks, it was the cyclicals leading the charge with industrials +2.4% and materials +2.2%. Cyclicals are likely to come under focus in coming weeks with vaccine hopes high (President Trump overnight touting the possibility of October for a vaccine – “we could even have [a vaccine] in the month of October.”). One research house released a note on the stocks that would outperform if a coronavirus vaccine is approved (see CNBC for details).

European tech underperformed (+1.1%), while US NASDAQ futures are down -0.4%. The underperformance of tech was compounded yesterday on w/e reports of the US government considering placing export restrictions on China’s Semiconductor Manufacturing International Corp – its stock fell 22.9% in HK and marks another escalation in the US’ crackdown on Chinese technology companies. The broader CSI 300 was down -2.1%. The other factor in tech has been more press around SoftBank’s call option exposures with SoftBank stock down -7.2% even as it made $4bn worth of gains on the exposure (see FT for details).

There was little in the way of data

China’s August trade balance was stronger than expected on a surge in exports (+9.5% y/y against 7.5% expected), while imports were weaker than expected (-2.1% y/y against expectations of +0.2%). Export demand was driven by personal protective equipment and consumer electronics. There is some notion that this demand could start to slow with advanced economy retailers now moving through their restocking phase, while household incomes are likely to take a hit with stimulus starting to be tapered (e.g. in Australia where JobKeeper and JobSeeker tapers after September).

Also out was German Industrial Production for July which undershot expectations (+1.2% m/m against 4.5% expected), while Sentix Investor Sentiment beat (-8.0 against -10.5 expected).

President Trump meanwhile remains bullish on the recovery (“probably a super V”), but importantly retains his harsh China rhetoric into November (“There’s been no country anywhere at anytime that’s ripped us off like China does.” The risk is that the harsh rhetoric bleeds through to action, even if the US-China phase one trade deal remains, as the mooted action on Chinese Semiconductor suggests and Trump also entertained the idea of “decoupling”.

In contrast to growth optimism

The Brent Oil fell -1.5% after state-oil giant Saudi Aramco on Saturday lowered pricing for oil it will sell to Asia and the US by more than expected, a signal of wavering demand. Worryingly Russia’s Deputy Energy Minister Sorokin said global oil demand may not get back to pre-virus levels for another two to three years.

Closer to home in Australia

Victorian virus numbers continue to track lower with just 41 new virus cases yesterday and which if sustained should see restrictions gradually eased by September 28 according to their easing plan. Although the plan has been widely criticised by business, there is the possibility that easing thresholds are met earlier than tentatively laid out (currently September 29, October 26 and November 23) with the actual halving rate of the virus being 8.9 days against a modelling assumption of halving every 18 days.

The protracted Victorian re-opening plan is prompting markets to ask what more the RBA and the government can do. The latest Bloomberg survey on expectations for the RBA sees 7 out of 11 expecting the RBA to boost its bond buying program, while 3 out of 11 expect the cash rate and yield curve target to be cut to 10bps. No one in the survey though expects negative rates or direct FX intervention. The shift in the markets view of the RBA comes after last week’s RBA Statement where it was noted: “The Board will maintain highly accommodative settings as long as is required and continues to consider how further monetary measures could support the recovery”. There is also much speculation around the upcoming October budget.

The AFR today notes domestic banks could be directed by APRA to buy up to $240bn of additional federal and state government debt to normalise emergency bank liquidity (see AFR link). The moves could come if the RBA phases out the Committed Liquidity Facility (“Sources said regulators and banks had recently held talks about phasing down the existing $243 billion CLF, in recognition that there was much more government debt on issue and far less need for banks to hold less liquid private sector securities”).

A busy day domestically with weekly payrolls data and the NAB Business Survey for August. Both are likely to show some impact from Victoria’s lockdown. Offshore it is very quiet with US markets back from Monday’s Labour Day holidat. 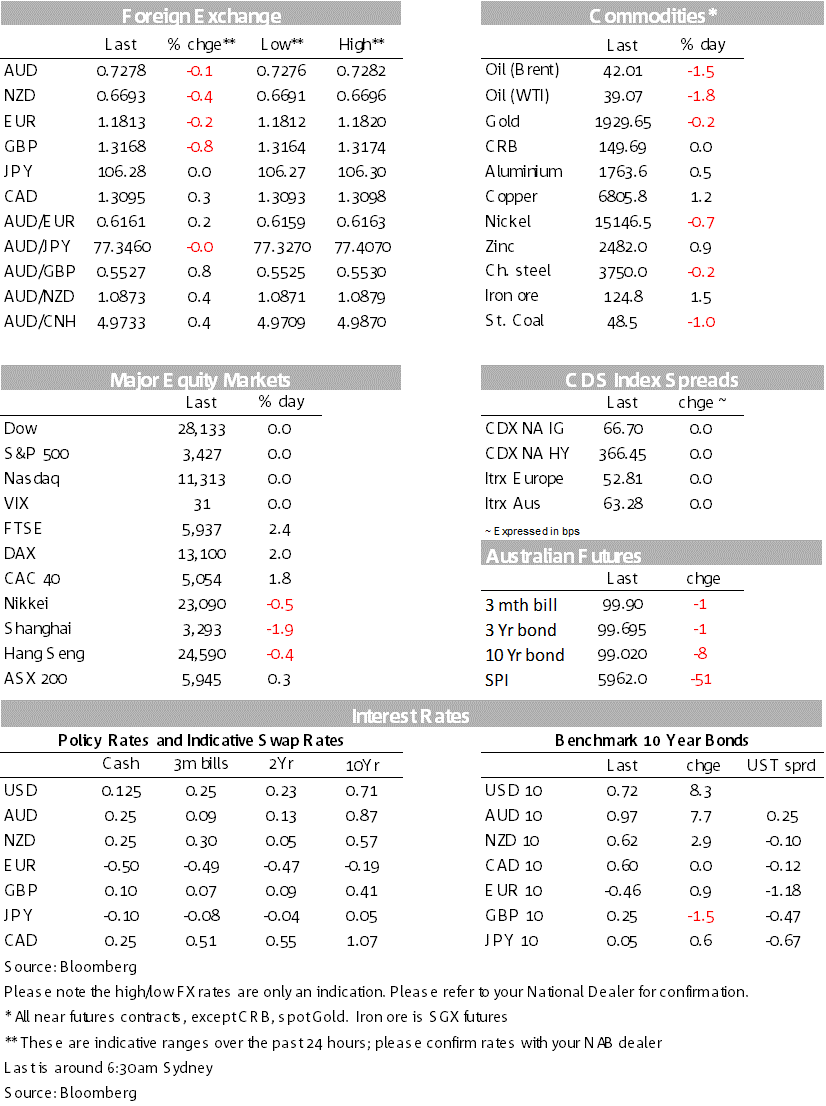 The Peter Lee surveys for FX (for Corporates and Institutional Investors) and Interest Rate Derivatives (for Corporates) are now open. We’d appreciate you taking the time to provide feedback on the service you have received from the NAB Research, Sales and Trading teams over the past year.