Overview: Let me love you

A quiet start to the week given the US bond market was closed for the Veteran’s Day holiday yesterday. The biggest news overnight was in the UK with the Brexit Party announcing it won’t contest any of the 317 seats won by the Conservatives at the last election. Instead the Brexit party would contest Labour-held seats at upcoming election on December 12. The market took that as a sign of reducing the chances of a hung parliament or the probability of a Corbyn-led Labour minority government. GBP jumped 0.8% in reaction to 1.2898, before paring gains to be +0.6% at 1.2851. The move higher in GBP also saw EUR up +0.2% with the USD (DXY) consequently -0.2% overnight to 98.18. The other mover of note was the NZD, which rose +0.7% to 0.6371 ahead of the RBNZ meeting tomorrow. The AUD in contrast was little changed -0.1% to 0.6857. In equities a mostly quiet day with the S&P500 -0.2%, though HK protests did weigh on Asian equities (Hang Seng -2.6%). Yields were little moved given the US bond market was closed; German 10yr yields were +1.8bps to -0.25%.

Nigel Farage yesterday said his Brexit Party would not contest any of the 317 seats won by the Conservatives at the last election. While he said the decision was “not easy”, he said it would ensure a PM that could deliver Brexit. While GBP did initially leap by 0.8%, it is unclear what impact this will have. YouGov’s Christ Curtis stated: “I’m not sure this makes much difference at all….Whilst it will certainly help the Tories retain the seats it currently holds, the Brexit Party will still be standing in the seats the Conservative Party hopes to gain from Labour in order to secure a majority.” The other piece of UK news out overnight was UK Q3 GDP data. While GDP came in slightly softer than expected at +0.3% q/q against the 0.4% consensus, the UK did avoid a technical recession after Q2’s -0.2%. The result took annual growth down to 1.0%, the weakest in nearly a decade, driven by weak business investment and industrial production – unsurprising given the Brexit uncertainty.

The Hang Seng was down -2.6%. Yesterday a protestor was shot, while a pro-China advocate was set on fire. It is the 24th week of unrest and it is still very unclear what can de-escalate the situation. Nevertheless, for as long as Beijing gives Hong Kong latitude to deal with the protests, it is likely the unrest will only have an isolated impact on financial markets. Highlighting that notion the S&P500 fell just -0.2% overnight, still playing to the view of some optimism over a US-China partial trade deal by the end of the year. While there was no new developments on trade, it was interesting to note that Adidas has decided it will close its only sneaker factory in the US after only having opened it in 2017 – it stated it would move production to Vietnam and China and highlighting that re-shoring manufacturing the US is more difficult than it seems.

Chinese data was mixed with Aggregate Financing missing expectations, while Singles Day Sales were very strong with Alibaba reporting sales up +26% y/y. As for Aggregate Financing it came in at 618.9bn Yuan, below the 950bn consensus. Seasonally adjusting the data suggests the flow of aggregate financing actually started decelerating from March and in level terms is around the levels which it has averaged since 2016. With softness in the industrial side of the Chinese economy continuing, it is likely the PBoC will need to undertake further easing.

Aside from GBP, the NZD takes the top spot on the G10 leader board +0.6% to 0.6366. There was no catalyst for the move, though as my colleague Jason Wong from BNZ notes, the NZD has been weaker than suggested by BNZ’s short-term fair value model by around 4 cents to 0.69 – the “cheapest” level in a decade according to that model. Key for the outlook will no doubt be Wednesday’s RBNZ meeting, where it is looking like it will be a finely balanced decision between no change in rates and a 25bp cut. Once that risk event is out of the way, it could pave the way for a stronger NZD into year-end. In contrast the AUD was little moved overnight, down just -0.1% to 0.6853.

While the US was closed German 10yr yields rose 1.8bps to -0.247%. In central bank news, overnight the ECB bought €2.8bn in corporate bonds as it started CSPP-2, representing the second largest week of bond purchases since June 2016.

Domestically the NAB Business Survey is the main drawcard. It is mostly quiet in Asia with only Japanese Machine Tool Orders likely to garner much interest. The data flow heats up again as Europe opens with ECB’s Coeure speaking, UK Employment figures and the German ZEW. It is a busy day for speeches in the US with three Fed speakers, while President Trump is giving a speech to the Economic Club of New York: 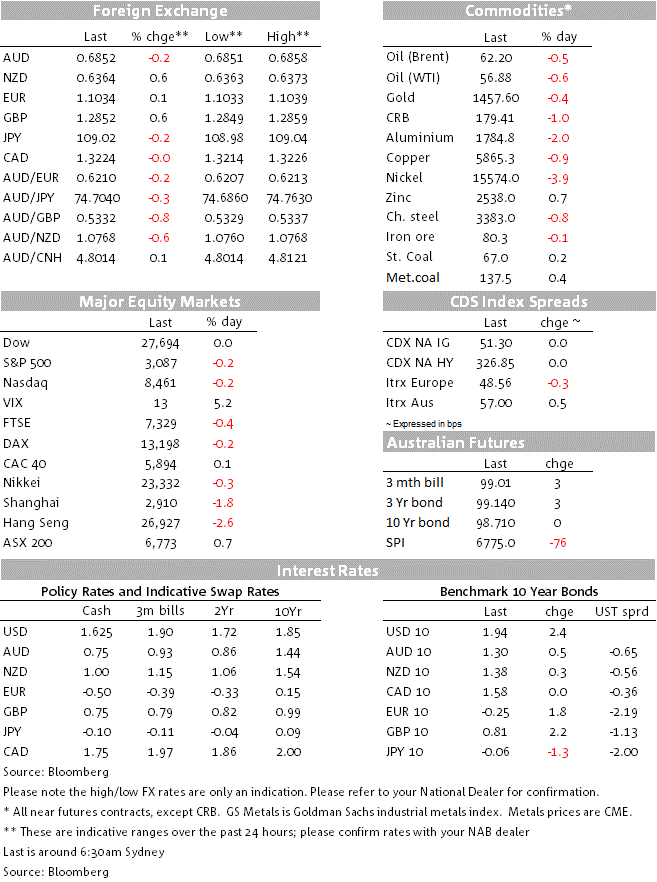