The pound has risen again as negotiations continue into the night (again) over a Brexit deal.

Likening talks to climbing Everest, Mr.Johnson said the summit was “not far but still surrounded by clouds” – BBC

Sterling remained firmly in the spotlight in the last 24 hours, adding another 0.4% or so to Wednesday’s gains taking it to its highest levels since mid-May. Other major currencies are also mostly stronger (including a faint pulse for AUD) after weaker than expected US retail sales stook a bite out of the big dollar. US equities  are down slightly at the close while bond yields are lower, pricing for an October 31st Fed rate cut ratcheting up a notch post the US sales data.

Coming into the New York close

There is as yet no sign that a ‘deal’ has been reached on Brexit that would allow EU Commission officials to put a proposal to the EU Summit that starts later today in Brussels.  Indeed, the BBC quotes a government source in the last hour saying that there will be “no deal tonight”.  And just listening to former UK chancellor Philip Hammond on UK Sky News, it is not at all clear that he (along with the 20 or so other Tory MPs who lost the party whip last month) would vote for a new agreement even if satisfied with regards to the Irish border issue. In particular, if the political declaration no longer expresses a commitment to continuing tariff free trade between the UK and The EU and which Hammond describes as akin to a ‘no deal’ Brexit. As such, it is not just about getting the northern Irish DUP on side with the so called Irish backstop. That said, with so much momentum evident in the direction of getting a deal done, no-one yet seems willing to reach for the ejector seat button as far as GBP is concerned, in the almost certain knowledge there are many more cents of upside if a deal can be pulled off before October 31st.

The Euro has risen as much as the pound since this time yesterday, partly on the coattails of the latter but also benefiting from headlines, albeit not necessarily ‘new news’ that German Chancellor Angela Merkel’s CDU is preparing for German fiscal stimulus if GDP takes a hit, with the caucus potentially willing to drop the ‘Schwartz null’ balanced budget constraint if the downturn depends. Hallelujah, though quite what depths to which the Germany economy has to sink to before this occurs remains to be seen. Q3 German GDP in due on November 14th and which may well confirm Germany entered a technical recession in the quarter, following the -0.1% Q2 GDP print. It’s also the case that if Germany is to relax its fiscal rules, size matters in terms of just how much fiscal stimulus is then forthcoming.

AUD and NZD have lagged the moves up in GBP, EUR (and CHF), AUD in front of today’s labour market data that have the potential to move the dial on RBA pricing for the November meeting (see Coming Up below).  The NZD is flat on this time yesterday, its underperformance likely reflecting comments from RBNZ Deputy Governor Geoff Bascand, who said Wednesday that there was a “reasonable prospect” that the OCR goes lower and the RBNZ was cognisant of global risks.

The headline piece of economic news overnight was US retail sales

This fell by 0.3% against a consensus forecast of +0.3%, with weak auto sales one particular driver (sales ex-autos fell by only 0.1%). The ‘control’ sub-series that feeds the consumption component of GDP was flat against 0.3%, though some of the pointy heads we follow on the US data front reckon personal consumption expenditure in Q3 was still running close to its 2.5% average of the past year or so.  The Atlanta Fed’s latest GDPNow tracking estimate for Q3 was revised up to 1.8% overnight from 1.7% on October 9th. US Treasury yields nevertheless fell after the data, the 2-year yield down to 1.58% from 1.615% pre-release (1.59% now); 10s are 2.5bps lower on the day at 1.75%. Money market rates in contrast have been held up somewhat by a renewed flare up of funding pressures, that saw the Fed allot the full $75bn it was offering by way of overnight liquidity. October Fed Funds futures though are pricing a quarter point rate cut with about 80% probability.

Included a strong NAHB (homebuilders) index, up to 71 from 68 and confirming housing to still be the brightest single spot of the US economic landscape.  The Fed’s Beige Book out two hours ago showed the U.S. economy expanded at a “slight to modest pace” through early October, a slightly weaker assessment of the economy than in the previous Beige Book released in September, with some anecdotes of firms firing workers while others reduced hours rather than shed employee in the hope that the downturn in trading conditions prove temporary, given the ongoing difficulty of finding suitable labour.

Canada’s September CPI reading printed lower than expected in headline terms (unchanged at 1.9% not the 2.1% expected) but the core measures were either flat or up 1/10% on last time. Earlier, UK CPI printed 1.7% on all measures – either in line or 1`/10% below consensus.

US equity markets have just closed with small losses of between 0.1% and 0.3% with a very mixed performance across sector, energy faring worse (-1.5% in the S&P) despite modestly firmer oil prices.  Bank of America just beat its street EPS estimate.

RBA deputy Governor Guy Debelle speaks in Sydney at 09:15 AEDT on ‘Housing and the Economy’. There will be Q&A.

Employment growth is forecast to slow and NAB expects a 10k gain in September (market: 17k).  This is consistent with the earlier decline in the NAB survey’s employment index, SEEK job ads and ABS vacancies.  If the unemployment rate rises sooner than we expect (i.e. in today’s figures) this increases the risk that the RBA cuts the cash rate in November, earlier than NAB’s current forecast for a December cut to 0.5%.

The US has industrial production (expected -0.2% after +0.6% in August) the Philly Fed survey (expected at 7.6 down from 12.0) housing starts and weekly jobless claims. The UK has retail sales. 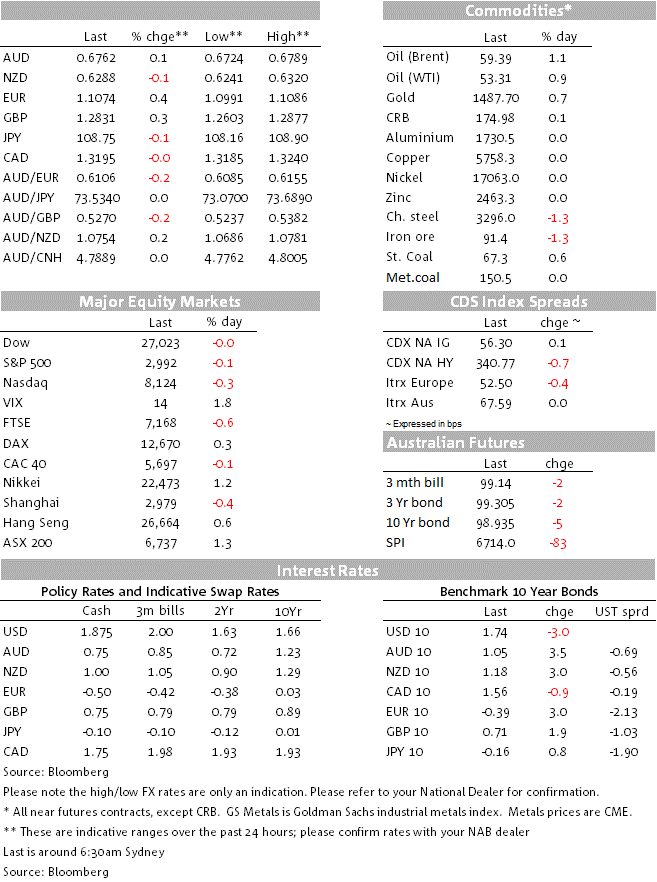