Markets Today: China angry on US Hong Kong Bill, but will it impact the trade deal?

Overview: Sweet dreams are made of this

As song titles go, Sweet Dreams by the Eurythmics probably sums up overnight price action the best. It was a night of limited market moves with US bond and equity markets closed for Thanksgiving. European markets were also quiet with little in the way of top-tier data to drive. Yields are barely moved with German 10yr yields +1.1bps to -0.36%, while G10 FX has been kept within +0.2% with the USD (DXY) unchanged at 98.34. EvenPresident Trump’s signing of the HK Bill late Wednesday had little impact. Despite headline bluster, there has been little sign of fallout – reinforced overnight by relatively mild retaliation. The Global Times editor tweeted: “…out of respect for President Trump, the US and its people, China is considering to put the drafters of the Hong Kong Human Rights and Democracy Act on the no-entry list, barring them from entering Chinese mainland, Hong Kong and Macao”. No surprises then to see European equities only modestly lower (Eurostoxx 50 -0.2%, FTSE -0.2%), ditto US equity futures at -0.1%, along with the AUD (-0.2% to 0.6767) and USD/CNH (+0.3% 7.0330).

First to the HK bill. President Trump signed the Hong Kong Human Rights and Democracy Act late Wednesday (early Thursday AEDT) before the US Thanksgiving Day Holiday. China was not pleased with the Foreign Ministry calling it a “blatant hegemonic move”, but beyond the initial bluster there has been little sign of fallout given China had already been resigned to Trump signing the bill. The only retaliation so far by China and tweeted by the Global Times is for the drafters of the bill to be barred entry to China (see Global Times Tweet for details).

One Chinese academic put it this way: Beijing should not overreact given “the act is a card, but the US can only play it once” and if sanctions were ever imposed under the act the biggest victim would be HK (see SCMP for details). The WSJ also quoted another Chinese academic stating “It does spoil the mood, but it shouldn’t interfere with the trade talks” (see WSJ for details). So far the consensus then is the singing is not expected to impact the ongoing trade truce and prospects for a partial trade deal, but probably limits the scope of further agreement thereafter. Note President Trump also signed the Protect Hong Kong Act which prohibits the sale of American munitions to law enforcement agencies in Hong Kong.

In the UK polls continue to dominate price action ahead of the December 12 election. The much-anticipated YouGov-MRP poll showed the Conservatives could win a majority of 68 seats. GBP initially rose to 1.2950, but the move hasn’t been sustained with GBP falling back to 1.2910. Likely a contributor to the reversal is a late surge in voter-registration with around 3.1m applying to vote, including 1.2m aged under 25 years who tend to vote Labour and are being encouraged to do so by Stromzy.

Datawise it was a sparse night with only the German CPI of note coming in a tenth higher than expected at 1.2% y/y against the consensus of 1.1%. In contrast, CPI figures for Spain were as expected at 0.5% y/y and pointing to balanced risks around the consensus for the wider Eurozone measure out today.

In Australia, slightly weaker than expected Capex data had little impact on markets (Capex fell -0.2% q/q against expectations of 0.0%). Under the hood though, equipment investment which feeds into GDP figures out next week fell by -3.5% q/q and is thus likely to subtract around 0.2%points form Q3 GDP. Combining the data with construction figures earlier in the week, business investment overall is likely to subtract around 0.1-0.2%points from Q3 GDP (out Wednesday Dec 4) . As for expected spend, expenditure plans were downgraded once adjusting for historical realised spend – 2019/20 plans now point to a fall of between 1-3% compared to the 1-6% rise implied by last quarter’s survey. Overall the data thus points to a sluggish investment outlook.

Finally, yesterday in NZ the ANZ business outlook survey for November saw a rise in business confidence, though the data had little impact on markets with NZD pretty much back to where it was pre-data. The own-activity index rose to 12.9 from -3.5, though is still well below the long-run average of 26.5. The bounce follows a recent run of positive data, including Q3 retail sales, improved PMIs and higher commodity prices. My BNZ colleagues note this reduces the downside risk that had been hanging over their 2% growth forecast and support the view that the NZ rate cut cycle is probably over.

A quiet day ahead domestically with only monthly credit stats out. Ditto internationally with only Japanese Industrial Production and Eurozone CPI figures likely to attract market attention in what is likely to be holiday-affected trade. Data on Saturday might be the pick of the bunch with Chinese PMIs due which could set the tone for markets first thing Monday: 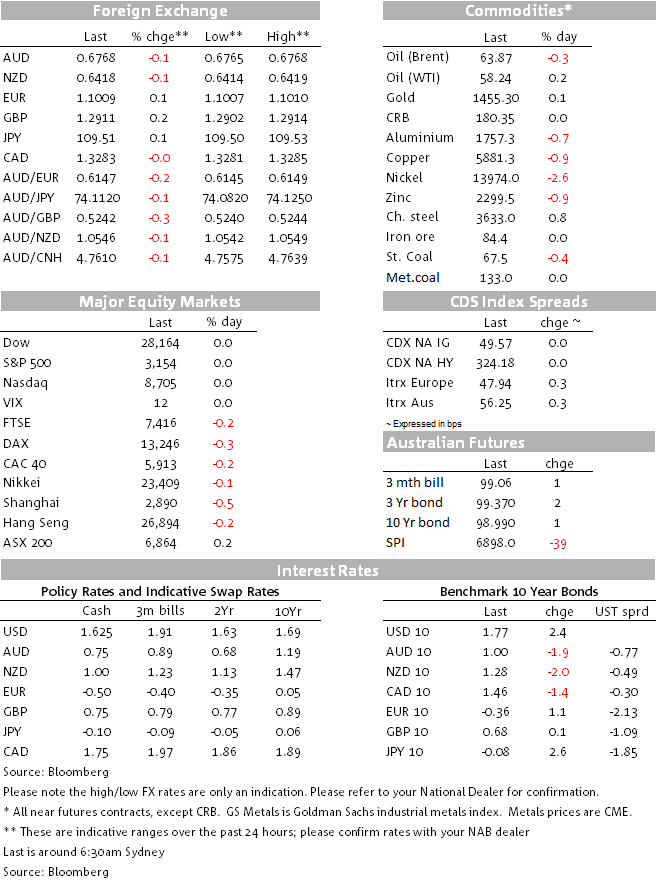