A positive reaction to reports China might drop tariffs on US car imports reversed by threats from President Trump about a possible government shutdown if he doesn’t get the funding to build the wall.

Upside down, Boy, you turn me inside out, And ’round and ’round – Diana Ross

Markets continue to jump at shadows. News, late in our session yesterday, that China was planning to cut US car tariffs provided a positive start to the overnight proceedings, but later in the session sentiment was dented again following President Trump renewed threat to shut down the government if he doesn’t get funding for building a wall in the Mexican border. Reports of the Trump administration preparing a report calling out China’s stealing of US technology didn’t help sentiment either. Against this backdrop European equities closed in positive territory and the initial gains recorded by US equities have essentially been eroded over the past few hours. 10y UST yields are little bit higher, but the curve is flatter and the USD has remained bid, amid souring in sentiment and Brexit developments that continue to weigh on GBP and EUR. After trading higher AUD and NZD are little changed.

Good trade vibes late yesterday provided a positive start to the overnight session and helped European equities closed in positive territory. Yesterday afternoon, the Chinese Ministry of Commerce said that US Treasury Secretary Mnuchin and Chinese Vice Premier He had spoken on trade to “push forward with next steps in a timetable and roadmap”.  There have also been reports that China’s cabinet was reviewing a proposal to cut the tariff on imported US cars from 40% to 15%, as Trump had claimed after his G20 meeting with President Xi.  Trump seemed to foreshadow such an announcement, tweeting “Very productive conversations going on with China! Watch for some important announcements!”

All major European equity indices closed in positive territory with the Stoxx Europe 600 index ending the day at 1.53%. US equities enjoyed had a positive start with the S&P 500 jumping over 1.30% at the open, but the positive mood didn’t last too long with Trump headlines threating a government shutdown plus news over a soon to be release US government report over China stealing of US technology souring sentiment. Following a tense exchange with Nancy Pelosi and Chuck Schumer, Mr Trump said he would be “proud” to shut down the government over border security.  If a government shutdown is to be avoided, a spending bill needs to be passed by December 21st, so both parties have plenty of time for a few shouting matches, before a deal is reached.

The Washington post has reported that Trump administration is preparing a series of actions this week calling out Beijing for what it says are China’s continued efforts to steal America’s trade secrets and advanced technologies and compromise sensitive government and corporate computers. The report adds that the Justice Department is expected to announce the indictments of multiple hackers suspected of working for a Chinese intelligence service and participating in a long-running espionage campaign that targeted U.S. networks. So while on the one hand it seems that trade talks are going somewhere, the focus of the US administration is also shifting towards issues around technology and theft of intellectual property, this is a theme we believe will gather momentum in the new year. A trade truce could be in the offing, but we are only at the beginning of a US-China technology war and this emerging theme looks set to be a source of market volatility in 2019.

The USD lost a little bit of ground early in the session, but then as sentiment turned defensive the big dollar climbed higher yet again. DXY is +0.24% on the day and at 97.426 is trading close to its year to date high, similarly BBDXY is +0.12% and currently trades at 1211.71. Trade tensions and the threat of a US government shut down has boosted the USD, amid its safe haven attribute, but Brexit developments weighing on GBP and EUR have also played their part.

The GBP has remained under pressure over the past 24 hours, following conflicting reports that there would be an imminent leadership challenge to PM May.  Sky News reported that the European Research Group (a Brexit-supporting group of Conservative MPs) believed it had reached the hurdle for a leadership challenge (48 MPs submitting letters).  According to Sky, the Chairman of the 1922 Committee of backbenchers, Graham Brady, would wait until May is back in the country before making the announcement.  Other media outlets, including the BBC and Sun, however do not believe that threshold has been met yet.  The GBP fell below 1.25 on the Sky News reports, with the market concerned that May could be replaced by a Brexit-supporter, increasing the chance of a no-deal scenario.

GBP is down 0.21% on the day and after trading to an overnight low of 1.2492, the pair now trades at 1.2530. Meanwhile, PM May’s mission impossible in Europe is not yielding any surprises. The PM is hoping to win some concessions/ “legally-binding” assurances on the Irish backdrop, but EC President Juncker said the EU would only offer “clarifications”, but that the full legal text was not up for negotiation. Meanwhile the BBC reports that Downing Street has said a Commons vote will be held on the deal before 21 January and Brexit minister Robin Walker told MPs he hoped it “would be sooner than that”. So with no resolution within sight, the pound is likely to remain volatile for at least a few more weeks, if not months.

AUD and NZD have essentially been bystanders over the past 24hrs. Both antipodean currencies are little changed relative to this time yesterday. The initial positive trade news helped AUD trade to an overnight high of 0.7225, but following a souring in sentiment the pair no trades at 0.7208.The 50 day moving average, now at 0.7184, remains  a key support for  the AUD, but with no major domestic data releases the pair remains at the mercy of offshore risk events and headlines.

Copper is the big mover overnight, gaining 1.89% while oil prices also moved a little bit higher ( WTI +1.39% and Brent +0.57%). US oil production to average 12.1m b/d in 2019, up from the 10.8m b/d in 2018 according to the EIA. Current US production is around 11.5m b/d. Overall suggests US production to continue at high levels and impedes OPEC’s ability to lift prices via production cuts. 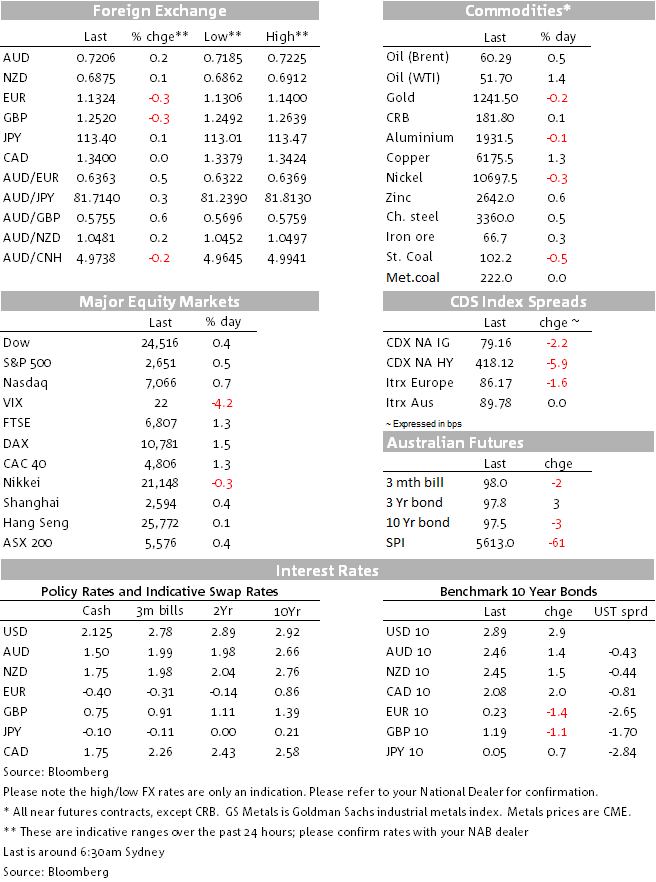