Last week finished on a positive note, sparked by a strong bounce back in credit growth in China, together with very strong export numbers.

Overview: Moving on up

Movin’ on up, you’re movin’ on out, Time to break free, nothin’ can stop me – M People

Stronger than expected China trade and credit data triggered a risk on move on Friday with the groovy vibes preserved throughout the overnight session thanks to solid US bank earnings, corporate activity in the energy sector and Disney’s streaming news. The USD ended softer across the board with commodity link currencies outperforming. Copper led the move higher in commodities and the UST yield curves steepened with 10y UST yields closing the week at 2.56%.

China’s trade data, released late in our session on Friday, revealed March Exports jumped 14.2% y/y against expectations of a 6.5% y/y rise. The Trade Balance printed a solid  +$32.6bn surplus, although the import data was a concern coming in at -7.6% y/y against 0.2% expected with weakness in imports from US (-25.8%), Japan (-14.1%) and Germany (-8.4%). A couple of hours later we had the big kicker with China’s credit data revealing a big jump in March, after Lunar New year distortions in the January and February prints. Aggregate Financing was ¥2860bn against ¥1850bn expected and signalling a substantial ramp up in credit in the economy. This means credit easing measures are kicking in quite hard and focus will now turn to March’s activity data (IP, retail sales investment) due for release on Wednesday for confirmation that China has indeed turn a corner.

China’s data releases were a welcome boost at the European open and the mood was further enhance by a positive JP Morgan’s earnings report before the US open. JPMorgan surged on a strong first-quarter report (5.3%), while Walt Disney Co. jumped to a record (+11%) after it announced a new streaming service. The S&P 500 closed higher for a 3rd week in a row and above 2900 for the first time in 6 months. Focus is likely to remain on US banks with Citigroup, BAML, Goldman Sachs and Morgan Stanley all reporting their results this week.

After enjoying solid gains on Thursday, the China led risk on move saw the USD lose ground across the board on Friday. The USD DXY index closed Thursday at 97.17 and  ended the week at 0.9645, after trading own to an overnight low of 96.751. The AUD (+0.69%) and other commodity linked currencies led the gains against the USD with the Aussie  closing the week at 0.7174. Technically the AUD closed above its 1 year downtrend channel at 0.7130/40 and now the pair looks ripe for a move above 72c. The offshore story is currently very supportive with the domestic backdrop currently a little bit more uncertain. RBA board minutes on Tuesday and labour market data on Thursday are the key domestic events this week. The RBA continues to focus on labour market data, where NAB expects the unemployment rate to tick back up to 5.0% in March (mkt: 5.0%) with solid employment growth of 25k (mkt: 15k).

The euro closed the week just under the 1.13 mark, but it has opened this morning at 1.306.  The union currency traded to an overnight high of 1.1324, but was unable to sustained those gains above the figure with unhelpful EU-US trade war concerns lurking in the background. Both countries are set to impose punitive tariffs against each other, amidst the long-running disputes over subsidies to Airbus and Boeing.  However, the sums involved are modest at around $12b and allowable under WTO rules.  The WTO will ultimately determine the amounts of damages that both sides will be allowed to claim.

Although the USD was weaker across the board, the greenback still managed to outperform  the yen. The BoJ’s firm commitment to its yield curve control policy weighed on the yen as UST yields climbed higher on Friday. USD/JPY ended the week at ¥112 on the figure.

GBP enjoyed the initial part of the risk on move, trading to a high of 1.3129, but later in the session the pair drifted lower, closing the week at 1.3075. On Sunday the Telegraph reported a “poll of polls” shows the Conservatives face losing 59 seats because of a “dramatic fall in support” over PM May’s handling of Brexit. In a similar vein, the Sunday Times is forecasting a Tory disaster in the European elections while the Observer reports a “generation” of young pro-EU voters could desert Labour if it doesn’t guarantee another referendum in its manifesto for next month’s EU elections.

The US 10-year rate closed up 7bps to 2.565%, at its high for the day and the highest level traded in over three weeks. Germany and UK 10-year rates were also up in the order of 6-7bps.  The market ignored slightly weaker than expected US consumer sentiment data and 5-10 year inflation expectations, which slipped back down to 2.3%, revisiting its record low.

On a positive US-China trade news, US Treasury Secretary Mnuchin said that the US is open to facing “repercussions” if it doesn’t live up to its commitments in a potential trade deal with China. Comments were interpreted as a positive sign in the negotiations with Mnuchin adding that the two countries are making progress, indicating the two sides are edging closer to an accord.

The G20 Finance Ministers and Central Bankers gathering ended without much fanfare. The group acknowledged the global economy faces downside risk, but  growth is expected to rebound in 2020. Downside risks include “trade tensions, policy uncertainty, geopolitical risks, and a sudden sharp tightening of financial conditions”, but the good news they all stand ready to “act promptly” to shore up growth.

More interestingly were comments from President Draghi noting that he was “certainly worried about central bank independence” and especially “in the most important jurisdiction in the world.” The ECB president defended the need for Central Bank’s independence arguing that “If the central bank is not independent then people may well think that monetary policy decisions follow political advice rather than objective assessment of the economic outlook,” Draghi said. “Central banks ought to be left free to choose what is the best way to comply with” their mandates.

Not to be undone, on Sunday President Trump renewed his attack on the Fed, tweeting “If the Fed had done its job properly, which it has not, the Stock Market would have been up 5000 to 10,000 additional points,” the president tweeted on Sunday. “Quantitative tightening was a killer, should have done the exact opposite!”

The week ahead begins on a quiet note with not a lot to highlight from the economic calendar today. US reporting season will be the focus tonight ahead of important data releases later in the week. The RBA board minutes on Tuesday and labour market data on Thursday are the key domestic event.  NZ CPI is out on Wednesday ahead of the all-important China activity readings and Q1 GDP. Then attention will likely turn to Europe with the April flash PMIs due out for release on Thursday. 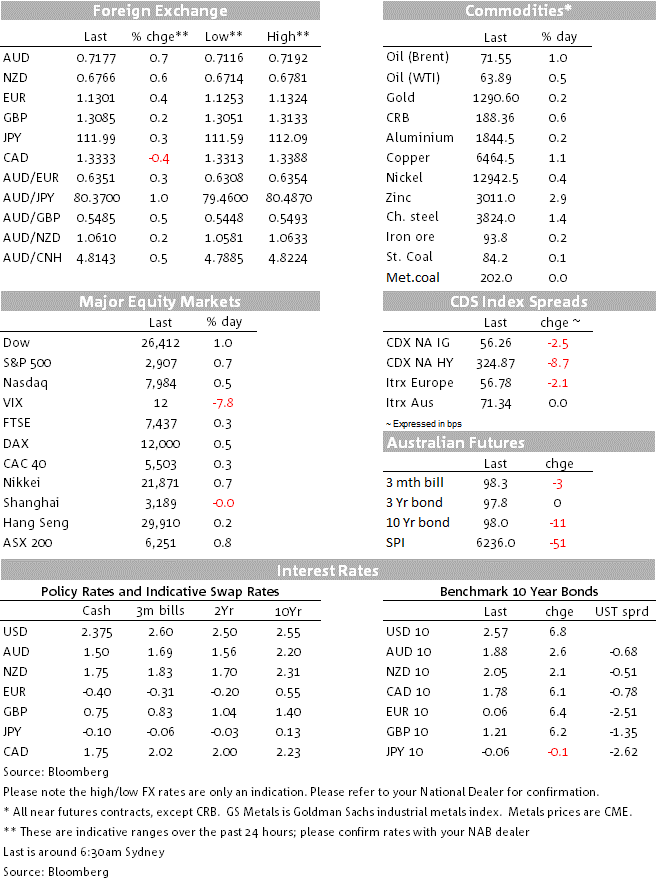