Sterling has been the biggest mover as Boris Johnson pulls ahead in the polls.

This coming and going is driving me nuts – The Rolling Stones

Sometimes lyric quotes are just perfect at capturing the market mood. Yesterday the smoke signals from the US-China trade drama were suggesting love was in the air, but as it has been the case for what now feels like an eternity, overnight signals suggest otherwise. After a soft opening, US equities are now back in positive territory while the USD is broadly weaker not helped by a drift lower in UST yields. GBP has been the outperformer in G10 while AUD and NZD are essentially unchanged.

Given the empty calendar, price action at the start of the week in the northern hemisphere was unsurprisingly muted. But at the margin, the market mood has become a little sombre on the back of a CNBC report noting that China was growing pessimistic about a trade deal. The Chinese government is concerned that Trump continues to insist publicly that he has not agreed to scrap some tariffs, despite the two sides reportedly reaching an agreement to that end earlier in the month. According to the report, China was also monitoring the impeachment hearings and wondering whether it was best to delay an agreement until there is more clarity on the political outlook.  Separately, Reuters reported that the US was set to extend a 90 day exemption for US firms to do business with Huawei.

It is certainly hard to make sense of the constant stream of US-China trade headlines blowing hot and cold air, that said our preference remains on putting more weight on comments coming directly from officials dealing with the trade negotiations and on this score there is nothing to contradict the view that the US and China are still working towards striking a deal. The negotiations remain ongoing, a Phase 1 deal looks more likely than not, but as usual the devil will be in the detail. The more tariff roll backs we get, the better for market sentiment and global growth outlook.

The CNBC news weighed on European equities and dampened the mood at the opening of the US session. European equities were unable to fully recover with all major Pan European indices closing the day with modest losses. The FTSE 100 was one exception up 0.07% as polls pointed (more below) at PM Johnson’s Conservative party gaining more support.  Brexit-sensitive shares were also up after BoJo confirmed all conservative candidates have pledged to back his deal to exit the EU. As we are about to press the send button, all three major US equity indices are now back trading in positive territory, thus more than reversing the CNBC souring trade news.

The modest move lower in UST yields has played into a mild but broad USD weakness with the DXY index -0.26% (now @97.793) and BBDXY -0.12% (now @1201.30). The USD also slipped a little on the back of news that Fed Chair Powell met President Trump at the White House. The Fed released a statement post the meeting saying that Powell’s comments “were consistent with his congressional hearings last week” and that he “did not discuss his expectations for monetary policy”.

GBP has been the big outperformer, up 0.52% and currently trading at 1.2955. The pound has been supported by poll news showing a further drift to the Conservatives. The latest YouGov poll conducted 14-15 November showed a 45-28 Conservatives-Labour split, net 17%, up from 14%, polled 11-12 Nov.  Poll averages methodology point to a comfortable Tory majority with a 60%-plus chance of a Tory outright majority with 350 seats. Speaking at the CBI conference, PM Johnson announced that his government would not proceed with cutting the corporation tax from 19% to 17% and instead devote the £6bn to the NHS.

The AUD (@0.6811) and NZD (@0.6401) are little changed relative to levels this time yesterday. Both antipodean currencies have shown little reaction to the move up in USD/CNY from 7.009 to 7.0250. The move was initially instigated by news that the PBoC cut the 7-day reverse repo rate to 2.50% from 2.55%, the first cut since October 2015 and first move up or down since March 2018. The decline in the repo rate follows the cut in the 1-year MLF from 3.30% to 3.25% in mid-October, and looks to presage a fall in the Prime Loan Rate from the current 4.30% as early as this Wednesday’s monthly PLR set.  The CNBC US-China trade news also played into the softer CNY move overnight.

This morning the AFR is running an article on Treasurer Frydenberg’s key messages from his planned speech before the Committee for Economic Development of Australia today. The article notes that Treasurer makes the case for keeping the budget in surplus not just to cope with current demands but also because of the long-term challenges, especially the “economic time bomb” of an ageing population. Ahead of the mid budget in December the Treasurer is signalling that we shouldn’t expect a big splash in spending. The article adds that that neither fast-tracked income tax cuts nor the promised investment allowance for business will be in the MYEFO. 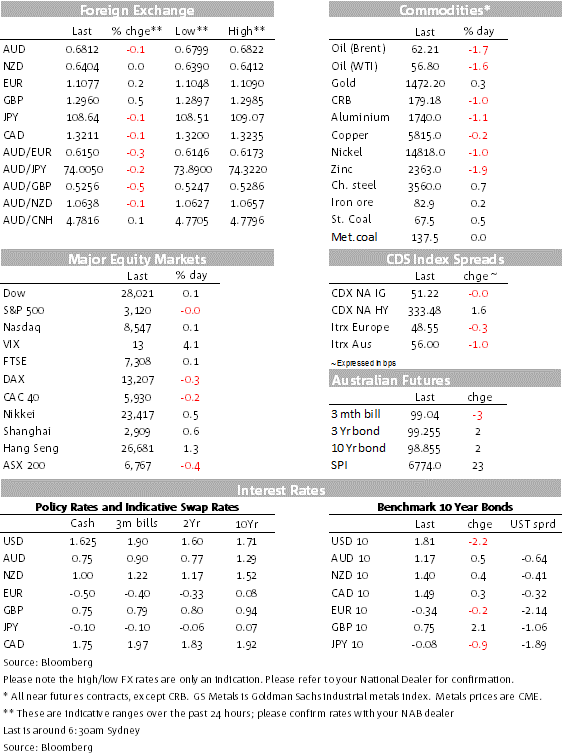