There have been significant moves overnight, with the US dollar losing ground against the Yen and Swiss Franc.

Turning on the screens this morning to see global equities in a sea of red and the increasingly shrill rhetoric going back and forth between the US and China, the surprise is that the AUD has not fallen cleanly through last Friday’s low of 0.6865.  It has touched it, but is currently 30 points higher and within kissing distance of regaining a 0.69 handle.

To understand why, we only have to look at the broader performance of the US dollar, and which started falling away in conjunction with tumbling US yields across the maturity spectrum, one catalyst for which was the evident weakness in the usually lesser-watched Markit version of US May PMIs. The manufacturing index fell to 50.6 from 52.6 (52.6 expected) and services to 50.9 from 53.0 (53.0 expected).  This was quickly followed by news of a 6.9% drop in new Home Sales; albeit the latter is a highly volatile series and the prior month was revised smartly higher.  Weekly jobless claims also fell, to 211k and are now back at cycle lows in trend terms, consistent with ongoing strong employment growth.

Earlier in the night there was not let up in the fairly grim news flow out of Europe, where the German and pan-Eurozone manufacturing and services PMIs all slipped a little further from their final April levels, one saving grace being that French readings were marginally higher (see Data Round Up below for summary details).

In the US rates market, the good news has been summarily ignored in favour of the bad, with Treasury yields from 3 months to 30 years all lower and the 3m/10yr spreads back inverted (2.35% for the 3m Bill vs 2.32% for the 10-year note).  10s are 7.2bps lower on the day and perhaps more telling, the 2year note 8.5bps lower, reflecting rising conviction that the Fed will be cutting rates Laster this year. December Fed Funds Futures now show an implied Effective Funds Rate of 2.05% vs. the current 2.38%.

In equity markets, more than half of the damage to the main board US indices came right at the open and prior to the aforementioned PMI data, suggesting that escalating trade concerns have been the biggest driver of the moves both today and earlier in the week.  Again its been a case of the NASDAQ losing more than  the S&P500, and the IT sector being the (second) biggest loser within the latter (-1.73% vs. 1.2% for the overall index).  Usurping losses for the IT sector has been energy, -3.3% within the S&P and where a  crude oil has slumped by over $3 with WTI crude sub-$60 for the first time since the end of March. Rising global growth concerns now look to be layering on top of the earlier week news of sharply rising crude and gasoline inventories to further squeeze out speculative long oil positions.

In currencies the real story is the slippage in the big dollar in the face of rising risk aversion which typically sees the USD attract safe haven support if not to same extend as either the JPY or CHF – the night’s two biggest gainers by far, up 0.7% and 0.6% respectively and followed, strange as it seems, by the NZD which is currently 0.4% higher at 0.6519. The narrow DXY index is 0.2% lower at 97.85, having earlier made a new post-May 2017 intra-day high of 98.37.

In explaining the turnaround, it’s hard not to look past the fall in US yields and increased market conviction the Fed will be cutting rats in the second half of 2019.  While lower rates Fed rates were already embedded in the US yield curve prior to today, it seems only now has the foreign exchange market decided to take this on board in pricing the USD.  The USD reversal has in turn lent support to AUD (and NZD), with AUD/USD up from an intra-night low of 0.6865 to a high of 0.6900 (0.6898 now).

GBP has been little changed though the night, with no reaction to news in the past hour that beleaguered UK prime minister Theresa May will today (Friday) announce her timetable to quit, with reports suggesting the party leadership contest will commence on June 10th and with her remaining at the helm until the latter is complete (a process that will take many weeks, possibly several months).  So May’s departure is fully priced into the pound, but what follows from that is not, in particular once we – presumably – have a ‘hard brexit’ Tory holding the prime ministership. Markets will almost inevitably have to move to price in a much greater chance of a ‘no deal’ Brexit’ even if this is not what ultimately eventuates, suggesting lower levels ahead for all things GBP, something we’ll incorporate into upcoming FX Strategy publications.

As for trade, President Trump has been his mercurial self, first railing against China’s decades of unfair trade practises, announcing $16bn worth of support for farmers and ranchers on the basis there is not going to be a trade resolution anytime soon. He then confirmed that he will meet with Chinese President Xi at the Osaka G10 summit next month and saying that things could move fast with China and that there’s a good possibility of a trade deal and in which Huawei – who Trump describes as ‘very dangerous – could be included. Go figure.

On the China side, rhetoric appears to be hardening, with two commentaries in the state-owned People’s Daily taking aim at the US, with one likening the recent restrictions on Huawei as the US making steps to start a “technology cold war”.  And China’s Ministry of Commerce spokesperson Gao Feng told reporters “if the U.S. wants to resume talks, they should show sincerity and correct their wrong practices” adding that “only on a basis of equality and mutual respect can the talks continue.” 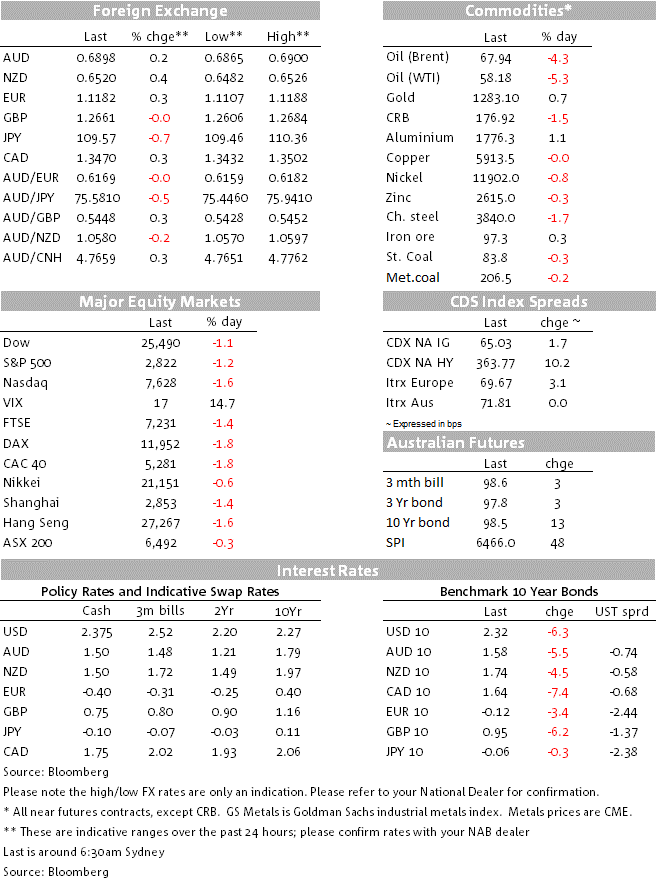