Asian currencies have born the brunt of rising concerns over the spread of COVID-19 beyond the Chinese mainland.

COVID-19 anxiety has risen to a new level amid concerns of virus outbreaks in Beijing and outside of China. US and EU equity markets have been sold across the board with core global yields benefiting from a safe haven demand. Solid US data continues to favour the USD with JPY again sold off along with other growth/risk sensitive currencies such as the AUD and NZD. The AUD traded to a new 11 year low, not helped by a bigger than expected rise in the Australia’s unemployment rate.

Although yesterday China’s equity market had a very solid day with the CSI 300 index jumping 2.3% (probably helped by the expected LPR decline to 4.05% from 4.15% while the five-year LPR, the reference for mortgage rates, was lowered to 4.75% from 4.80%), this positive mood did not spread throughout the APAC region. Anxiety over potential COVID-19 outbreaks outside China is now emerging as a growing concern for investors amid news of a rise in infection numbers outside of China while a change in virus diagnostic in China along with reports of rising number of infections in Beijing did not help the mood either.

Yesterday we learned that China’s health authority had reversed a change last week that saw cases in Hubei being diagnosed via chest X-rays on concerns of false positives. Under new guidelines, traditional testing will now be used as the benchmark. As a result the small increase of 394 new cases reported in China was treated with some scepticism while the number of reported cases in South Korea more than doubled, to 82, along with further increases in Japan and Singapore.

Against this uneasy backdrop

Concern around the economic fallout of COVID-19 on China and the broader Asian region has led to some sharp falls in several Asian currencies over the past 24 hours.  USD/CNH has moved decisively above the psychological 7.0 level and it is now trading at its highest level of the year, at 7.05.  The Thai Baht has fallen 0.8%, to its lowest level since June, the KRW by 0.8%, to its lowest level since October, and the Singapore dollar by 0.5%, to an almost three-year low.  The JP Morgan emerging market FX index fell 0.6% overnight, to an all-time low; it has declined by almost 4% in 2020.

The decline in the AUD began yesterday after a bigger than expected rise in Australia’s unemployment rate in January. After unexpectedly falling to 5.1% in December, Australia’s unemployment rebounded to 5.3% (market & NAB: 5.2%), returning to the 5.2-5.3% range prevailing since April 2019.  Although the domestic story did not helped the AUD, in addition to the broad risk off environment, the break below 0.6660 previous low on Feb 10th, opened the door for the AUD to hit a new 11 year low (overnight low of 0.6615). Technically now the AUD looks very vulnerable and with the USD having momentum on its side, many will be looking at GFC levels as a guide for AUD support ( see chart below).

The JPY has continued to weaken, despite the broader risk-off backdrop, USD/JPY now trades at ¥112.08, a level not seen since April last year.  Concerns around Japanese recession risk and COVID-19 appear to be trumping the usual safe-haven JPY demand that market participants have come to expect during periods of turbulence.

The 10-year Treasury yield has fallen 4bps to 1.52%, having touched 1.5% earlier in the session (equalling its lows for the year).  The market shrugged off a very strong Philly Fed survey, which increased to one of its highest readings on record.   New orders bounced to an almost 2-year high, which bodes well for the ISM survey.

The market prices around 40bps of Fed cuts by the end of the year.  Asked about this market pricing in a CNBC interview, Fed Vice Chair Clarida said “market pricing on rate cuts is a little tricky.”  Clarida said he didn’t think the market expected the Fed to cut rates this year and pointed to the forecasts of economists, the majority of whom don’t expect rate cuts this year.  Clarida added that the fundamentals of the US economy were strong although it’s too soon to see any impact of COVID-19 on the economy. 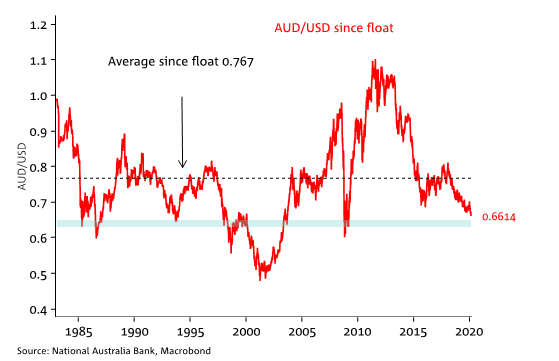 Even if we get better than expected numbers, the good news are likely to be dismissed with the rationale that the surveys have not yet  full captured the impact  from COVID-19. 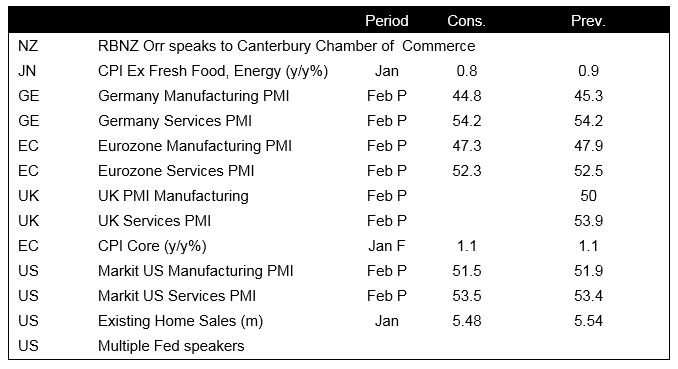 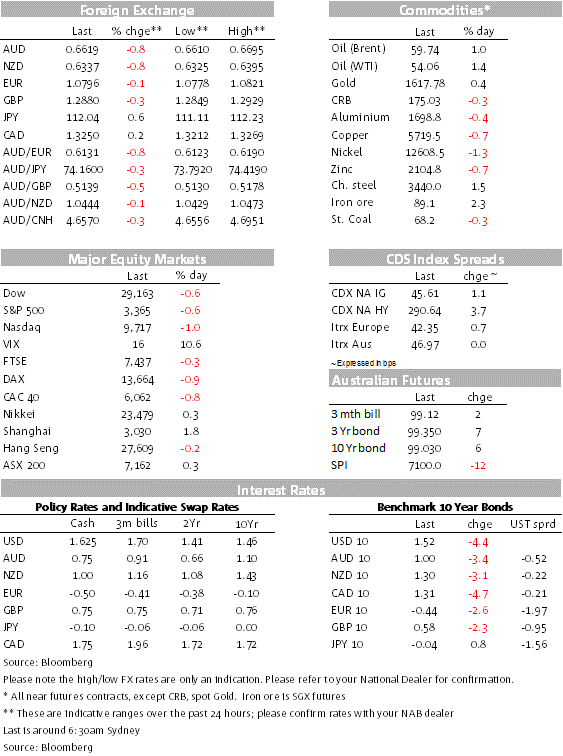 NAB re-affirms its 2024 rate call and expects economic activity to rebound strongly as restrictions are eased.

Friday’s main economic events, namely the ‘flash’ PMIs, tell us that there is little reason to fear stagnation, for the time being at least, given still elevated levels for all readings across Europe and the US.