European and US equity markets have began the new week under pressure amid rising concerns over European virus infections and risk of new full lockdowns. Meanwhile hopes for a US fiscal stimulus this side of the election are fading rapidly with both White House and House Democrats blaming each other for the stalemate. Bad company specific news have not helped the cause either with US Treasuries and the USD, to a lesser extent, benefitting from a safe haven bid. CAD is the big G10 underperformer, following the big fall in oil prices while the AUD holds above 71c.

Along the prospect of more severe lockdowns has weighed on sentiment at the start of the week in the Northern Hemisphere. The STX Europe 600 index fell 1.81% on Monday with company specific news also playing a negative role. The technology sector led the declines with the DAX tech sector falling over 16%  amid an eyewatering 22% decline in German software maker SAP. Not all tech companies have benefited from the pandemic with SAP announcing a cut to its sales forecast along warnings that the pandemic will hurt business through mid-2021. Concern over a widening rift with Muslim countries is also affecting the region with France in particular on the firing line after with Erdogan, Turkey’s president, called on Turks and other Muslim countries to boycott French goods over what he called France’s hostile stance toward Islam. The flip side of these tensions has also resulted in sharp decline on the Turkish lira  (-1.6%) to 8.09.

The number of new COVID-19 daily cases has set records across multiple European countries and the US in recent days, raising the prospect of another wave of economically damaging restriction measures.  Over the weekend, the Spanish government announced a state of emergency, introducing a nationwide curfew between 11pm and 6am.  In Italy, the government said all bars and restaurants would need to close at 6pm. The Czech Republic – the EU’s worst hot spot – signalled more curbs may be near, Belgium considered a lockdown and Denmark recorded more than 1,000 new cases.

Moving onto the US

The Senate is scheduled to disperse by the end of Monday while hopes of a US fiscal stimulus are fading rapidly with White House and House Democrats negotiations still in a stalemate. Overnight White House economic adviser Larry Kudlow said noted that differences have “have narrowed,” but he accused Democrats of increasing conditions on how money is used. Defending the Democrats position late on Sunday House Speaker Pelosi complained about Republican shifting demands, and insisted on the importance of structuring the deal in order to prevent President Trump spending the money “any way he wants”. Treasury Secretary Mnuchin and Democrat leader of the House Pelosi are due to talk by phone today but with barely a week to go until the election, the chances of a pre-election fiscal deal look close to zero.  Of course even if the White House and House Democrats reach a deal, it seems almost impossible the Senate will approve such a deal before the elections next week.

After trading well below 2% US equity markets staged a small recovery before the close with the S&P 500  ending the day at -1.86% while the NASDAQ fell 1.64%. The S&P 500 decline was the biggest in a month with energy and industrial sectors leading the decline. In addition to new supply concerns, oil prices have also come under pressure amid concerns over a global economic slowdown with no imminent US stimulus and increasing probability of more severe lockdowns. The S&P 500 energy sector closed 3.46% lower with oil prices down by a similar amount. Industrial were the next in line down 2.50%. Boeing, Lockheed Martin and Raytheon Technologies also fell following new China’s plan to sanction these companies over arms sales to Taiwan.

On a more positive note, vaccine news overnight were on the encouraging side. According to the FT, early results on AstraZeneca ‘s vaccine have shown “robust immune responses” amongst older people, which is considered crucial given the vulnerability of this section of the population. Meanwhile Johnson & Johnson said the first batches of its shot could be available in January. Both companies are resuming trials that had been paused due to safety concerns.

Moving onto the FX market

In line with a classic risk off environment the USD is broadly stronger, however compared to the big moves seen in equity markets, the reaction in FX market has been more subdued. Over the past 24 hours the USD is up 0.3% in index terms ( for both DXY and BBDXY) with the Euro (-.44%) and CAD (-0.57%) the big underperformers. COVID-19 infections and Turkey tensions not helping the Euro ( now @ 1.1808) with lower oil prices weighing on the CAD ( now @ 1.3196).

The AUD (@0.7127, -0.15%)  and NZD (@0.6679 -0.13%) have held remarkably well considering the u turn in equity markets.  That said both antipodean currencies are highly sensitive to risk sentiment, so if we see further declines in equity markets, the AUD and NZD are still more likely than not to come under pressure.

Looking at the rate markets

In offshore economic data, the only notable release overnight has been the German IFO business survey, which was close to market expectations and down a touch from last month’s level.  This followed the ‘flash’ European PMIs on Friday night which showed a further recovery in manufacturing but softness in the services sector, with the latter having been hit much harder by the second wave of COVID-19 in the region.  Of note, the German manufacturing PMI hit 58.0 in October, its highest reading since April 2018, buoyed by China’s post-pandemic economic recovery and related demand for German exports 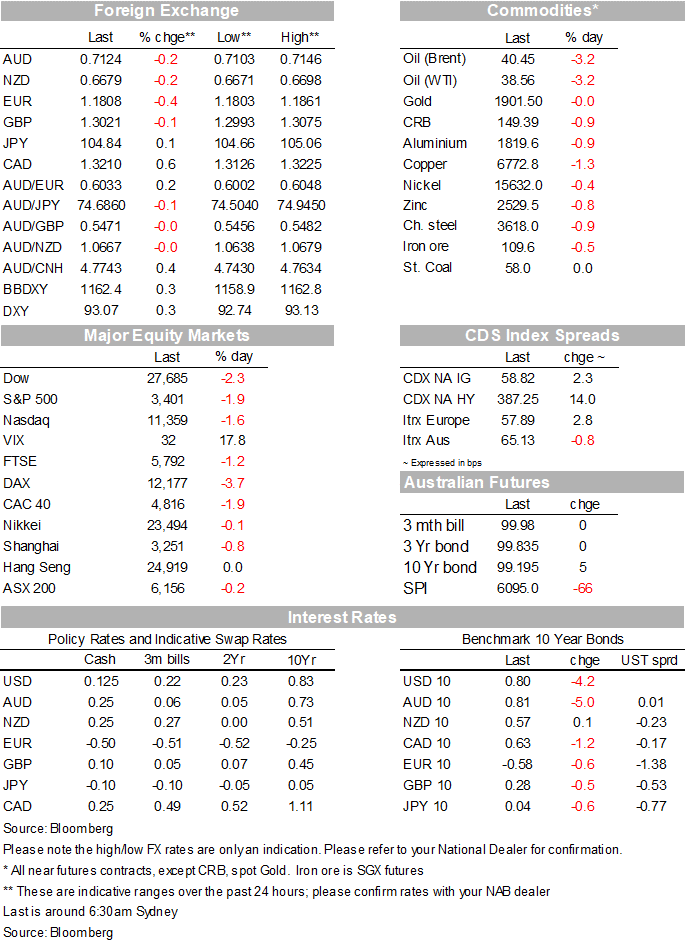