Two significant deadlines today means, whatever happens, we can expect some volatility.

I hear you knocking baby at my door, But you know you ain’t living here no more

It’s too bad, I think you made your move too soon – B.B King

US equities jumped at the open following a tweet from President Trump noting “Getting VERY close to a BIG DEAL with China. They want it, and so do we!”. The news also triggered a big sell-off in UST treasuries with the 10y note leading the move up in core global yields, up 10bps to 1.89%. The impact of the tweet on currency markets was more muted, and has actually supported the USD, with reduced tariffs seen to be positive for the economy. UK election nervousness has also been a key a factor in the USD performance, GBP down 0.85% as betting shops trim the odds for Conservative majority dragging EUR along for the ride. AUD briefly trades above 69c as CNH goes sub 7. As we are about to press the send button, headlines are hitting the screen noting a US-China deal has been agreed in principle and now awaits President Donald Trump’s approval. An official US-China announcement could be imminent. As it is often the case, the devil will be in the detail, it could be a big deal or B.B King could be right!!

It all started with a tweet and of course not just a tweet, but one from President Trump.  In trying to decipher any additional info from the President’s tweet, investors appear to really like the last three words.. “and so do we!”. Prior tweets had emphasised the President’s perception that China was the only one wanting/needing a deal. Apparently now the US is also keen. This positive vibe was further enhanced by a WSJ/Dow Jones report stating US negotiators had offered to slash existing tariffs by as much as half on roughly $360 billion of Chinese-made goods as well as to cancel a new round of levies set to take effect Sunday. The US would reimpose original tariff levels if China fails to carry off pledges, including firm commitments on agricultural purchases. CNBC confirms the sourced report and adds that China would also have the right to reimpose tariffs, making enforcement equal and easier to agree to. One sticking point is sourced reports that China remains reluctant to put its agricultural purchase promises into the language of a trade deal. As we go to press, media reports note a deal has been agreed in principle and an official announcement should be imminent

Trump’s tweet came soon after the US equity market opened, with the S&P500 up as much as 1.1% at one stage, but as the session went by investors’ enthusiasm was curbed somewhat with the S&P 500 giving back about half of the early. But as we are about to press the send button news headlines note a deal has been agreed in principle. The S&P500 is now +0.72%, NASDAQ is +0.52% and the DJ is +0.78%.

The Trump tweet and now confirmation of a deal in principle also triggered a big sell off in core global bonds with the 10y UST yield leading the move up in yields. 10y UST yields now trade at 1.90%, up 10bps while the 2y bond is +6bps to 1.67%.

So if we put the Brexit uncertainty to one side, the USD supremacy is not as clear with risk sensitive EM FX outperforming while commodity linked currencies are holding their ground. The trade news has seen CNH trade down to 6.95 from an early session high of 7.0388 (+1.2%) while BRL, ZAR and Try are up between 0.70% to .80% against the USD. The risk positive backdrop has also helped the AUD with the pair now trading at 0.6904, up 0.30% and it is the G10 outperformer. Meanwhile NZD and CAD are showing resilience and are little changed at a 0.6590 and 1.3187 respectively. Over the past hour, BoC Governor Poloz has been speaking noting the “nice spot in Canada’s labor market”, adding that pressures in the economy are starting to result in higher wages…..if only we could say the same for Australia.

The other key risk event overnight

Was the ECB policy meeting under new President Lagarde. While there was some anxiety ahead of the meeting, given the risk she might like to stamp her mark, the policy announcement and press conference were underwhelming, with little fresh insight. Having just kicked off its resumption of QE at the pace of €20b per month, policy and guidance were left unchanged and there were minimal changes to growth and inflation forecasts. The only fresh insight was that the downside risks facing the Eurozone economy were now “somewhat less pronounced”.

US PPI inflation data surprised to the downside, while a spike up in US jobless claims can be put down to seasonal adjustment issues around the Thanksgiving holiday last week. 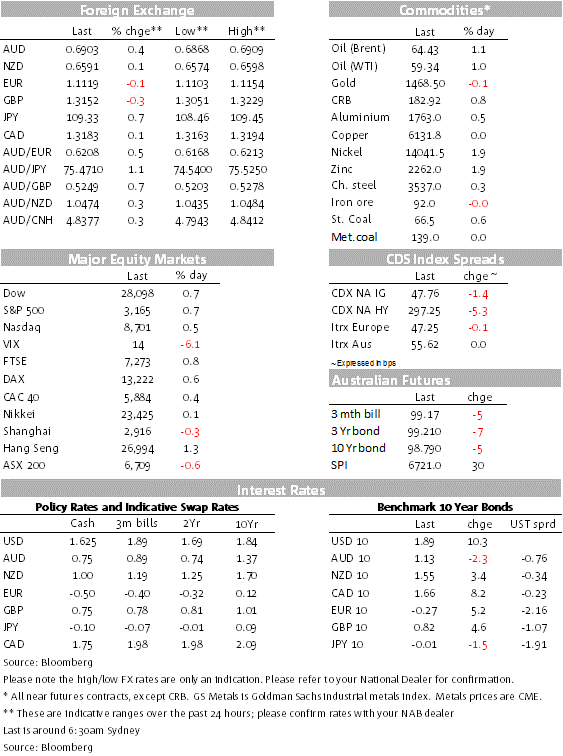