Markets Today: Markets reading the numbers and preying on hope

As this week wears on the combination of more positive news is able to lift markets, even while the Coronavirus continues to show no signs of slowing down.

What a difference a couple of days makes. Last week the news on the Coronavirus was very much in the developing stage and markets could not see through the fog of negative implications; ignoring the more soothing views of the ECB, Fed and BoE that the global economy was stabilising with signs of a bottoming out in the PMI activity data. As this week wears on the combination of more positive news is able to lift markets, even while the Coronavirus continues to show no signs of slowing down the number of affected Chinese citizens. Euro Zone, UK and US manufacturing and services PMIs for January have improved, US earnings reports have been on the whole good and a report from Imperial College London that claims to have made a significant breakthrough in reducing vaccine development time, have all added aided a further rise in equity markets, benchmark yields and a modest recovery in oil. While it is too early to tell for sure the read-through from price-action seems to be nCoV will be transient.

European equity markets gained 1.25% or so after Asia’s across-the-board gains Wednesday, providing US equity futures with a 1% or so pre-open lift. In the event the recently hard-charging Nasdaq has gone on to record a new all-time-high of 9574, while the Dow and S&P lag in the all-time high rankings but have posted stronger intraday gains of 1% and 1.4% respectively. US 10-year yields sprang up from 1.58% at the European open to 1.64% as Sky News reported Imperial College Scientists claiming to have shortened part of the normal vaccine development time from 2-3 years to just 14-days. Professor Robin Shattock, head of mucosal infection and immunity at Imperial College – and part of a global effort to develop a vaccine – said he is ready to start testing on animals as early as next week, with human studies in the summer if funding is secured. It is important to note a vaccine would be too late for the current outbreak, unless it becomes pandemic and circulates around the world in a second wave.

European services PMI data for January were better with Italy services activity expanding to 51.4 from 51.1 and the composite back above the 50 breakeven to 50.4. France disappointed a shade; in line with recent likely strike-affected volatile data. It saw services activity at 51 from 51.7, but still expanding. Germany recorded a stellar 54.2 – unchanged on the earlier flash data, but up from 52.9 in December. The Euro Zone services activity increased to 52.5, while the composite came in at 51.3 from 50.9. All this fits with the ECB characterisation of stabilisation and gradual improvement. Bond yields extended their gains, with US10s up to 1.66% and the Bund to -0.36%. US 10-year yields have risen 15bps since the start of the week. Curves steepened a little with US 2-10s at 21bps compared to recent lows of 16bps. Euro Zone December retails were lower than forecast at -1.6% m/m versus a consensus 1.1% decline; the result of the Black Friday sales effect, were November brought forward sales (+0.8% m/m).

Over in the UK, January services activity increased a little further; now at 53.9 from 52.9, while the composite number increased to 53.3 from 52.4. US ADP Private payrolls jumped 290k in January against a consensus rise of 158k and while this indicator doesn’t have a great track record at predicting US non-farm payrolls (due Friday consensus 162k), the strength of ADP was sufficient to offer some offset to the one disappointing factor in the US ISM non-manufacturing report. ISM recorded another jump in non-manufacturing activity to 55.5 from 54.9 and above a consensus 55.1. There were rises in business activity to 60.9, an eleven-month high and gains in new orders, while inventories were further run down. Employment activity grew at a slower rate of 53.1 from 54.8.

In FX the USD had a strong overnight session, with the DXY index rising to a fresh two-month high of 98.31, as USD/JPY and USD/CHF rose back towards recent highs. With safe-havens in retreat USD/JPY rose 0.45% to 109.85, while USD/CHF was up 0.57% at 0.9735. The EUR, GBP, AUD, NZD and CAD all fell, with the EUR back testing the 1.10 handle. Reflecting the better mood on the virus however, USD/CNH slipped from 7.01 at the European open to 6.9750. With that in mind the AUD was a little more resilient. AUD/USD initially rose to 0.6775 in early London trading, before losing those gains to 0.6745 as the broader USD picked up. No doubt the speech from RBA Governor Lowe is impacting the AUD in a positive way.

Governor Lowe retains an optimistic view that the economy is “passing through a gentle turning point for the better.” In a speech entitled ‘The Year Ahead’, Lowe was optimistic, stating that recent inflation and unemployment data showed very gradual progress that was in line with the bank’s expectations.  Growth is expected to accelerate from 1.7% at present to 2.75% by end-2020 and 3% by end-2021, with unemployment to fall to about 4.75% by mid-2022, such that inflation approaches the bottom of the 2-3% target band over the next couple of years.  The bushfires were expected to subtract 0.2% from GDP over H1 2020, with little effect for the year as a whole.  It is too early to tell the impact of coronavirus, but the bank has factored in a temporary effect on growth.  Even with these shocks, Lowe downplayed the risk of a negative quarter for GDP in Q1.

Lowe thinks a rate cut is possible if the Reserve Bank fails to make progress towards its inflation and unemployment objectives, but he hopes for a period of stability this year.  Lowe was emphatic that low interest rates worked. NAB’s view is that the economy will significantly underperform the Reserve Bank’s outlook, especially in the near term, with growth likely to be lower than the bank’s forecasts both this year and next, such that unemployment is likely to edge up to about 5.5%.  The bank’s forecast sharp acceleration in growth this year appears overly optimistic considering the impact of the bushfires and the coronavirus, but, as we wrote on Tuesday, NAB’s main disagreement with the bank’s outlook is our underlying concern that private demand remains weak, with ongoing pressure on consumer spending from weak incomes.  This leads us to expect the Reserve Bank to ease policy further to boost inflation and reduce unemployment, where we forecast the next rate cut in April. 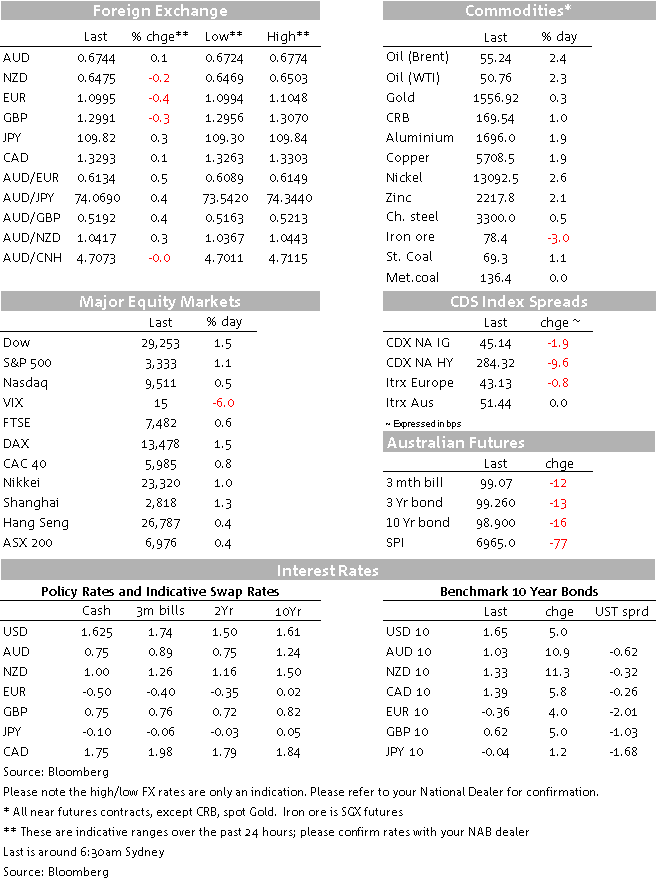